The HTC One X was highly regarded, but sales weren't great so the company went back to the drawing board. What it came up with was 2013's HTC One - a phone that tried to change the way consumers think about mobile photography.

We'll get back to the aluminum unibody and the audio features, but we want to start with the camera as it got some things right and some things wrong.

The key idea was that pixel size determines image quality, not resolution. Enter UltraPixels, HTC's marketing name for the 2µm pixels. There were only 4 million of them, 4MP resolution, but they were larger than what the iPhone 5 (1.4µm) and the Galaxy S4 (1.14µm) had, they were also larger than the pixels on the fondly-remembered Nokia N8 (1.75µ).

The aperture was fairly bright for the time, f/2.0, allowing more light to reach the 1/3" sensor (for comparison, the iPhone had a 1/3.2" sensor, the Nokia 1/1.83"). Optical Image Stabilization helped the sensor capture even more light.

Photos shot with the HTC One didn't have as much details as the 8-13MP sensors of the competition. Not in the daytime, anyway.

HTC did achieve its goal of having superior image quality in the dark. This was something all smartphones of that era struggled with. If you were the type to take photos mostly in the evening, especially indoors, this was the phone for you.

The HTC One had a dedicated ISP processor, ImageChip 2, which eased the pressure on the Snapdragon 600 chipset. Besides processing photos and videos captured with the camera, it also enabled a feature called Zoe.

When using the Zoe mode in the camera app, each time you hit the shutter key the phone actually captured 20 photos along with 3 seconds of video (1 second before you hit the key plus 2 seconds after).

Zoe then went on to create Events - grouping shots based on the time and location and creating 30 second highlight videos using the 3 second clips it captured. It also made a slideshow of the photos and allowed you to add a soundtrack.

Standard looking gallery, at first • Events view is where Zoe comes in

Having 20 photos to work with, Zoe gave you a lot of options after the shot was taken. If you couldn't find at least one good shot where everyone is smiling and has their eyes opened, Zoe would merge several photos and create one for you. Also, it used the video to track moving objects and put a big red X on them - tap it and they are deleted from your photo.

Those stacks of 20 photos were messy to deal with on a computer. Instead, you could use Zoe Share, which allowed you to share web links to your photos and highlight clips (rendered as GIFs). HTC did release an update later on, which cleaned up the Zoe file structure, giving you just a single JPG and an MP4 file for the animated version.

Anyway, burst shots and automatically-generated highlights videos are pretty common today. If your phone's software doesn't do it natively, Google Photos can handle it. Of course, Photos wouldn't be unveiled until two years after the One.

HTC tried to buck another industry trend - large screens. The One had a 4.7" LCD that was perfectly crisp thanks to the 1080p resolution. With dark black levels and high contrast, it was a great display for the time, if smaller than phones that weren't named "iPhone". HTC was no longer bundling Beats headsets with its phones (like it did with the One X), as the company was in the process of selling its stake in Beats. You still got a nice pair and the music player had a Beats equalizer, though.

Even better were the BoomSound stereo speakers flanking the screen. The audio quality they offered was nothing short of amazing. Each speaker had its own amp, though they weren't the loudest - HTC clearly optimized them for quality.

They were front-firing speakers too, which made for a great experience when watching videos and playing games. This also helped with the perceived volume - most phones of the era had rear or down firing speakers so the sound was rarely pointed in the right direction.

The BoomSound stereo speakers were quite powerful (2.6W RMS)

The HTC One originally launched with Android 4.1 Jelly bean and was later updated to 5.0 Lollipop. There was also a Google Play Edition, which stripped off HTC's Sense UI (which had a place in the Windows Mobile and early Android days, but not so much in the post Ice Cream Sandwich world).

Whichever version you bought, you got a gorgeous phone - HTC was one of the few companies still building metal phones. The aluminum unibody took 200 minutes to produce using CNC machines and the premium-looking device was well worth the effort.

Still, that extra difficulty led to shortages early on, the UltraPixel sensor also proved hard to source as well, so early sales hit a few bumps - HTC said it had orders it couldn't fulfill in the first month of the phone's availability.

The HTC One was received well, reviews praised the bold choice of a 4MP camera with large pixels and adored the powerful speakers and sleek metal exterior. People who bought it loved it too.

The One sold fairly well. It launched in March and by the end of the month it had reached 5 million sales. The president of HTC North America called it the most successful phone in the company's history. The competing iPhone and Galaxy sold better, but this was still a strong showing by HTC, which was slowly losing its position as a leading smartphone maker. 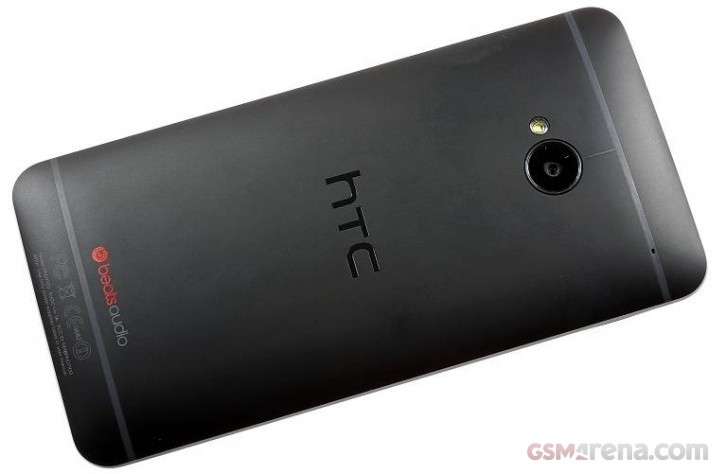 Those component shortages didn't help either. Worse still, sales in Q2 were declining, reaching around 3-3.5 million units for the period.

The HTC One was a bold move, the company tried to build a phone based what would work better rather than what would be easier to advertise. Unfortunately, the gamble didn't pay off and HTC's downward slide continued.

Samsung Galaxy S4 vs. HTC One

Wife got this in 2013, but she dropped it in the toilet in 2015. Loved this phone, perfect size for her that is why I bought the HTC One Mini 2 for her after that. But the Mini 2 just stopped working for no reason at all. No water damage, not dropped...

I loved my One X!! What could I get that would be comparable or superior to the One X I miss that phone so much!! I have a crappy Samsung j7 or something unhappy I will take any suggestions thank you

Nah, man, that was the HTC 8X. I'd have the HTC One today if it was capable of supporting WM10. The aluminum unibody construction was uber-sleek, the front-facing speakers filled the room, and phone just felt damn good in your hand.