The Satio was Sony Ericsson’s first phone with a 12MP camera. It very nearly became the first 12MP phone ever, but it was beaten by a few months by rival Pixon12 from Samsung. This is a rivalry that we will revisit in just a bit.

Even if it couldn’t claim the bragging rights of being first, the Satio produced high quality photographs at the click of a button. And it had plenty of buttons – you’d be forgiven if you mistake the right side of the phone for the top side of a point-and-shoot camera. The rear was very camera-like as well, plus you had a nice big screen with which to frame your shot and review your photographs. Really, if it wasn’t for the red and green buttons on the front, this could easily have been a Sony digital camera. 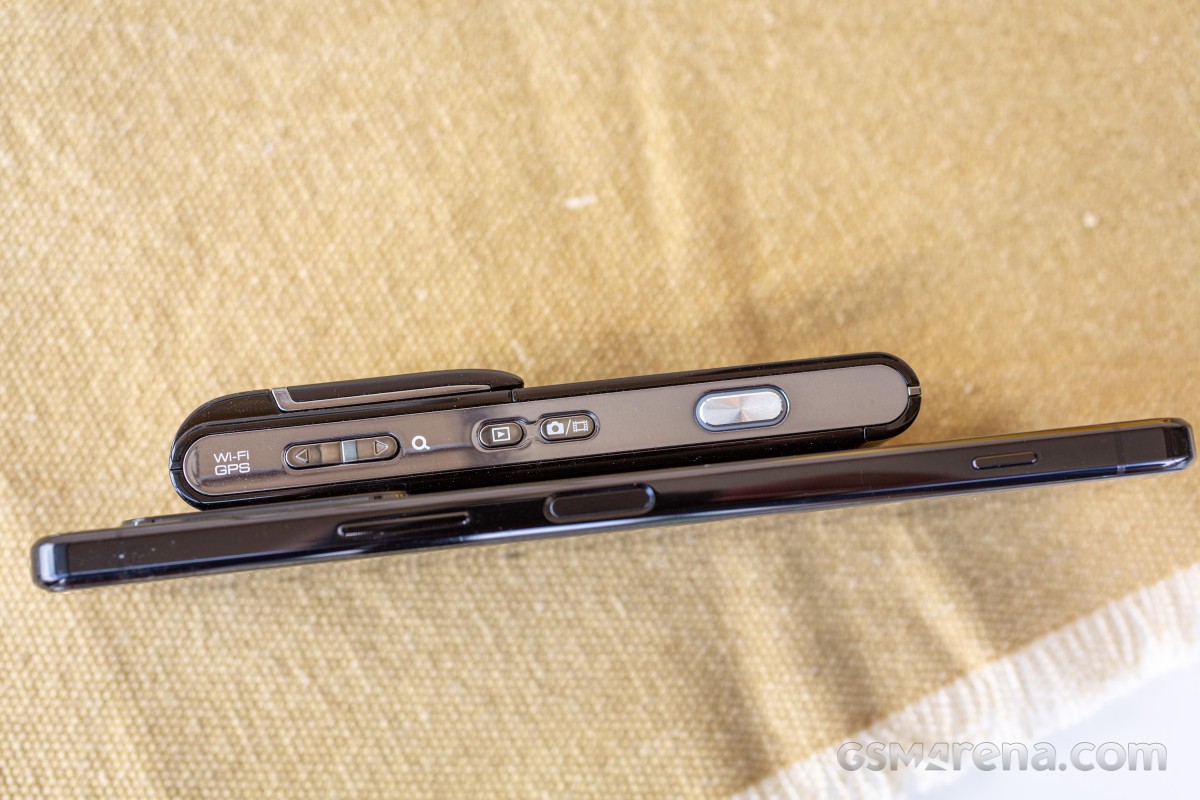 We’ll talk about the camera in a second, but allow us to set the scene first. It was a turbulent time for Sony Ericsson – the Satio was its first Symbian phone with the S60 5th edition interface (later renamed to Symbian^1). This was after SE’s touch interface of choice, UIQ, shut down development. And it was just before the company adopted Android. Also around the same time came SE’s flirtation with Windows Mobile.

The search for the One True Touchscreen OS is an interesting story that we will tell in the future. Now let’s look at some camera samples. The first one shows a graffiti rendition of the iPhone, the culprit that caused Sony Ericsson’s split personality. The company may not have flown at Nokia’s altitude, but it was quite successful in the era when feature phones dominated. The launch of the iPhone turned the whole industry on its head, causing the company (and others) to scramble in search of a response. 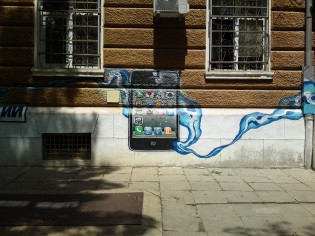 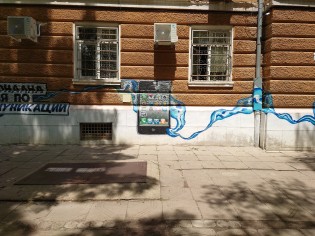 Back to the photo. The first thing we noticed is just how narrow the lens is – we took a Sony Xperia 1 II along to compare how much Sony’s mobile photography has developed in the past decade. This photo was taken with the main 24mm camera of the modern flagship and it has a noticeably wider field of view. This is before we even get to the ultrawide-angle camera.

Here’s a comparison between the single camera of the Satio, against the flexibility offered by the three cameras of the Mark 2 flagship.

The reason we’re holding both a Satio and an Xperia 1 II is because we wanted to see how far along smartphones have come in terms of image quality and in general. These are Sony (Ericsson)’s best camera phones of the year 2009 and 2020. With all that progress, some things haven’t changed. 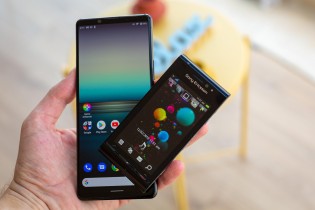 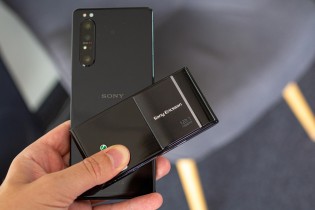 You may have noticed that both the Satio and the Xperia 1 II shoot at 12MP resolution. In fact, most smartphones these days target that resolution. Even the ones with high megapixel count sensors tend to default to pixel binning to 12MP.

Keep in mind that a 1080p TV has only 2 megapixels or so, a 4K TV goes up to 8MP. Even accounting for the different aspect ratios (16:9 for TVs and Satio’s screen and 4:3 for its sensor), the camera outputs 9MP images. 12MP is the sweet spot between having enough resolution to zoom in a bit or fill a modern 4K TV and having image files that are a manageable size. Plus the tiny phone optics are really pushed to their limits already so increasing the resolution further brings rapidly diminishing returns.

In its heyday the Sony Ericsson Satio was one of best mobile camera around. In our review we described the image quality like this: “the amount of resolved detail is great and the noise levels are tolerable”. Of course, that was back in 2009, image sensors and image processing have developed at an impressive pace over the last decade.

Through modern eyes we see a fair bit of color noise, even after the noise reduction system smudged up a large portion of the fine detail. The dynamic range is quite narrow, though the camera does well to preserve the darker areas. Color rendering is good, if a touch oversaturated. Plus, if you zoom out a bit, the photos are not bad at all.

The experience of using the camera also shows how far we’ve come. The ponderous autofocus of the Satio takes ages compared to the lightning fast Xperia AF system. Processing and storing the image is slower too. Speaking of storing images, we left the office without a microSD – we’ll just shoot a few photo samples, we thought, no need for extra storage. It’s been a while so we had forgotten that the Satio has only 128 MB of built-in memory, some of which was reserved for the system. This means the phone can fit only 22 shots at 12 MP. We made it work, but a bit more storage would have been appreciated on a camera phone. 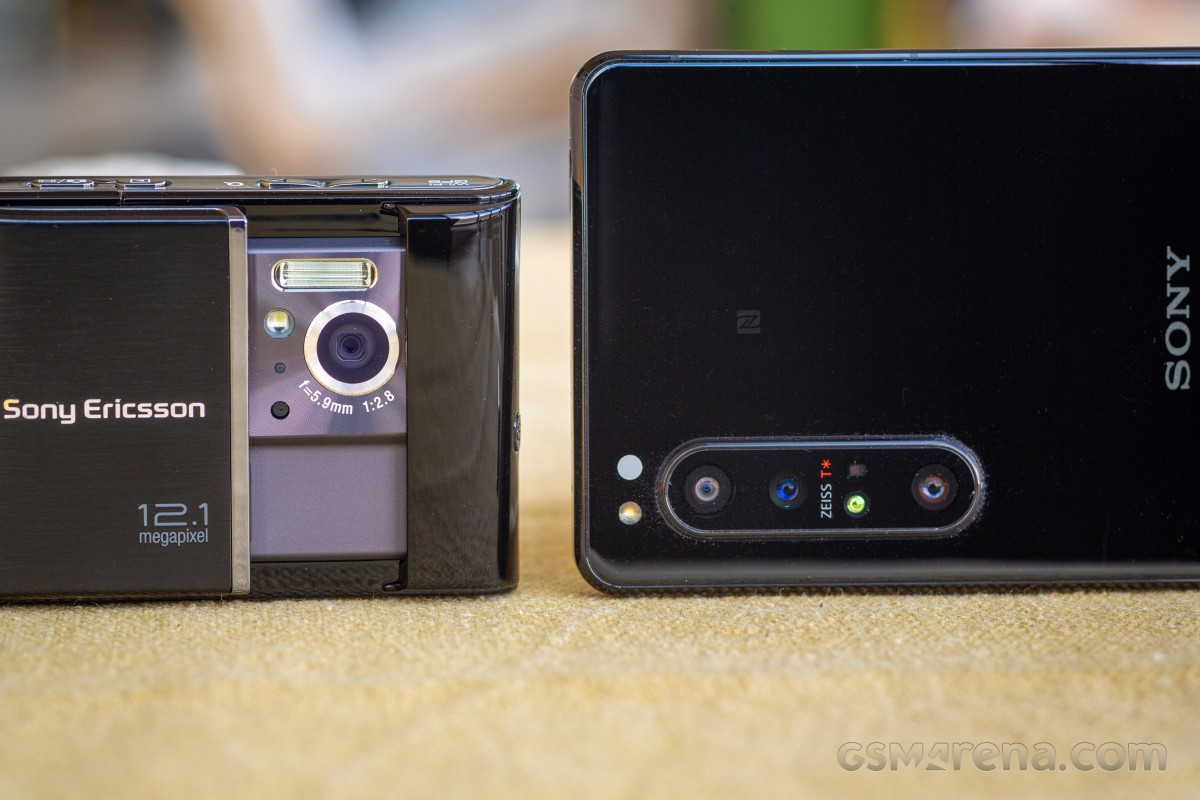 Shooting with the Sony Ericsson Satio was quite fun, though. The camera is protected by a spring-loaded slider – you push it out of the way and the camera app launches. It keeps the lens free from smudges and scratches. Close the slider when you’re done (again enjoying that tactile action of the spring-loaded mechanism) and the phone locks and goes to sleep.

The phone has a very camera-centric set of controls too. The two-stage shutter key is here, a Sony staple even today, though this one is surrounded by blue light when it is ready for action. There’s a dedicated button to switch between photo and video mode, a button to open the gallery and the volume buttons acted as zoom in and out buttons. 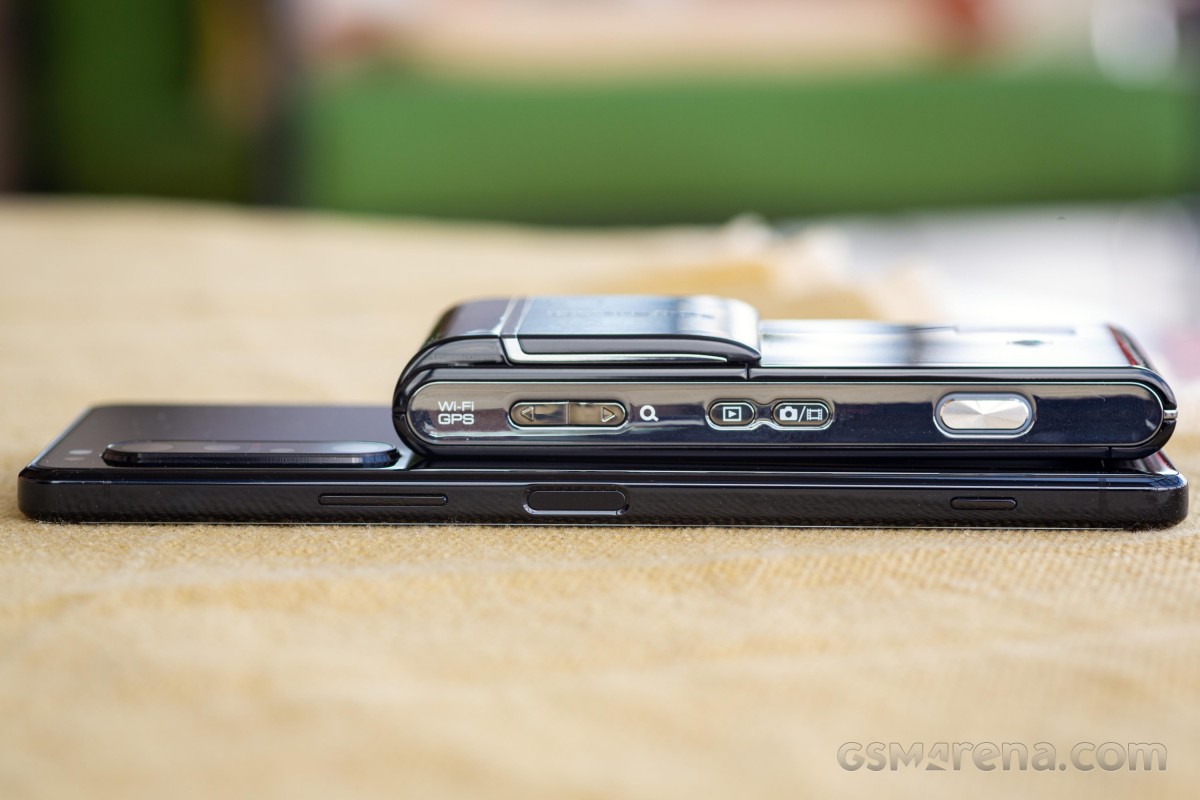 As basic as the camera app is, it has several preset scenes and smile detection. BestPic is impressive – it takes 9 shots in quick succession and automatically selects the best one (though you can pick one or more other of the series). Also, there is a built-in GPS receiver, so the phone can geotag the photos.

The camera is less impressive in video mode – the Satio could only record VGA videos (640 x 480 px) at 30 fps. This was expanded to widescreen (WVGA, 864 x 480 px) with an update, but still no HD. The first Sony Ericsson phone capable of 720p HD video recording was the Vivaz, which came in 2010, but that’s a story for another time.

The phone is rather thick, especially the part with the sliding camera cover, but it has both xenon flash and an LED flash. Can this old timer actually score a victory against its great-great-great-grandson thanks to its more powerful flash?

Well, no. Even back in the day the Satio had one of the weaker xenon flashes and it is nowhere near powerful enough to offset the darker lens (f/2.8 vs. f/1.7), the decade old sensor and decade old image processing. Lenses, sensors and algorithms have come a long, long way since 2009. The xenon flash still helped the Satio to get a decent view of a nearby subject, but the background, which is further away, is all but lost. 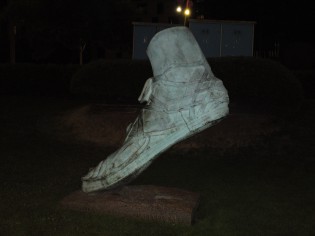 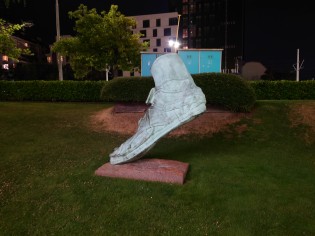 Here are some more camera samples in the not-so-dark - these were shot near large retail stores with plenty of illumination around the property. Still, the Sony Ericsson Satio needed to drop to 1/8 second shutter speed to gather enough light. At this speed (and without fancy algorithms) handshake is visible and smudges the image. The modern Xperia 1 II does extra processing to both produce a better image and counteract the handshake (the OIS helped as well).

The Satio is a touchscreen phone, though far from Sony Ericsson’s first. In fact, the Ericsson R380 had a large touchscreen and ran the EPOC OS, the predecessor of Symbian.

The Satio has a 3.5” LCD on the front with capacitive touch. Impressively, it can display 16 million colors – something early Android devices couldn’t do (e.g. the Xperia X10 was limited to 65K colors). And it is a 16:9 screen with 640 x 360 resolution (sometimes called nHD or 1/9th of 1080p), while more squarish displays were the norm in the past. Despite its thickness, the whole phone feels absolutely tiny next to the Xperia 1 II.

The resistive touch layer is a pain to use with our fingers that are now used to the responsiveness of capacitive touch. Just touching the display doesn’t do anything, you have to press on it. 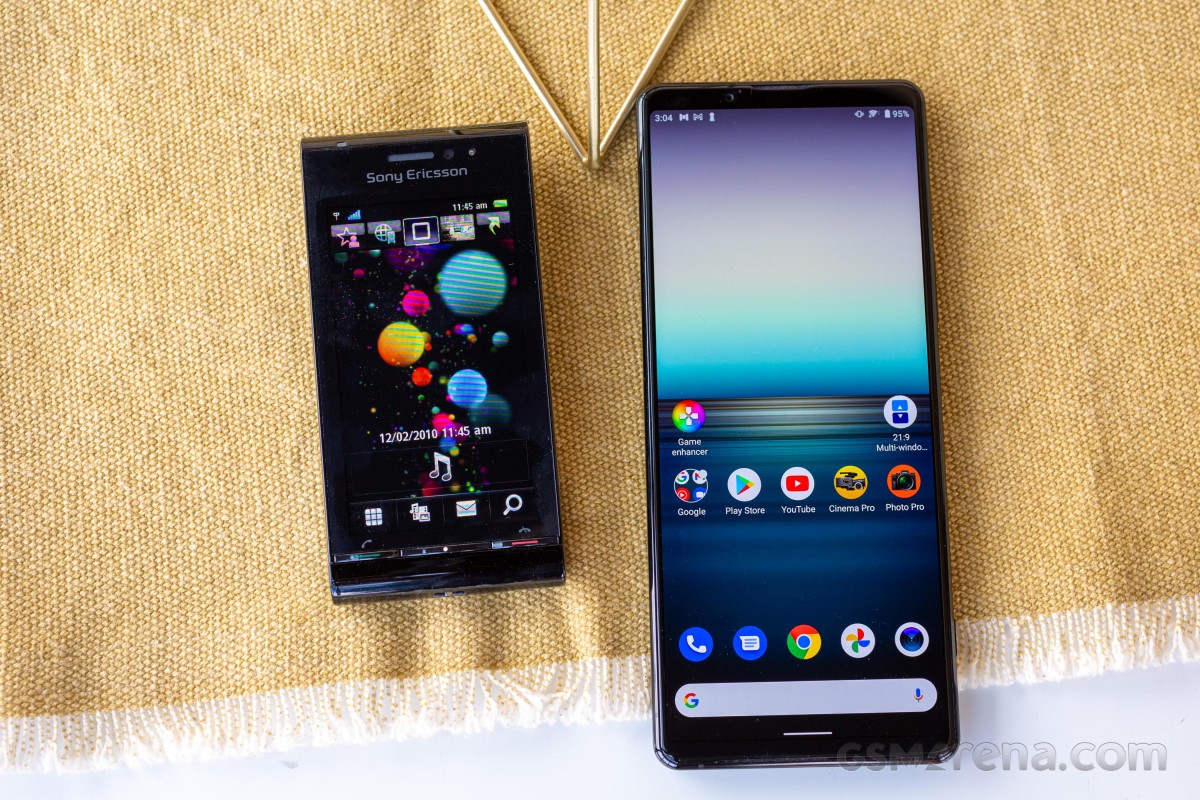 And Symbian just wasn’t ready for a touch-driven interface as we covered in our Nokia 5800 story. You can practically see the key-based logic behind the interface. In menus, first you tapped to select an item, then tapoed again to activate it. Scrolling was awkward too, you either had to use the scrollbar on the side or press, hold and move your finger to the top or bottom edge of the screen. This moved the selection from one item to the next, causing the list to scroll as necessary. You get used to it, but you’re not much better off than using a D-pad.

And the proprietary port is inexcusable, even for 2009. You needed a special cable to charge this phone or to connect to a computer over USB. Even the headphones need to use this port and the retail package came with a one-piece headset (instead of a two-piece that would have allowed you to plug in your own headset). 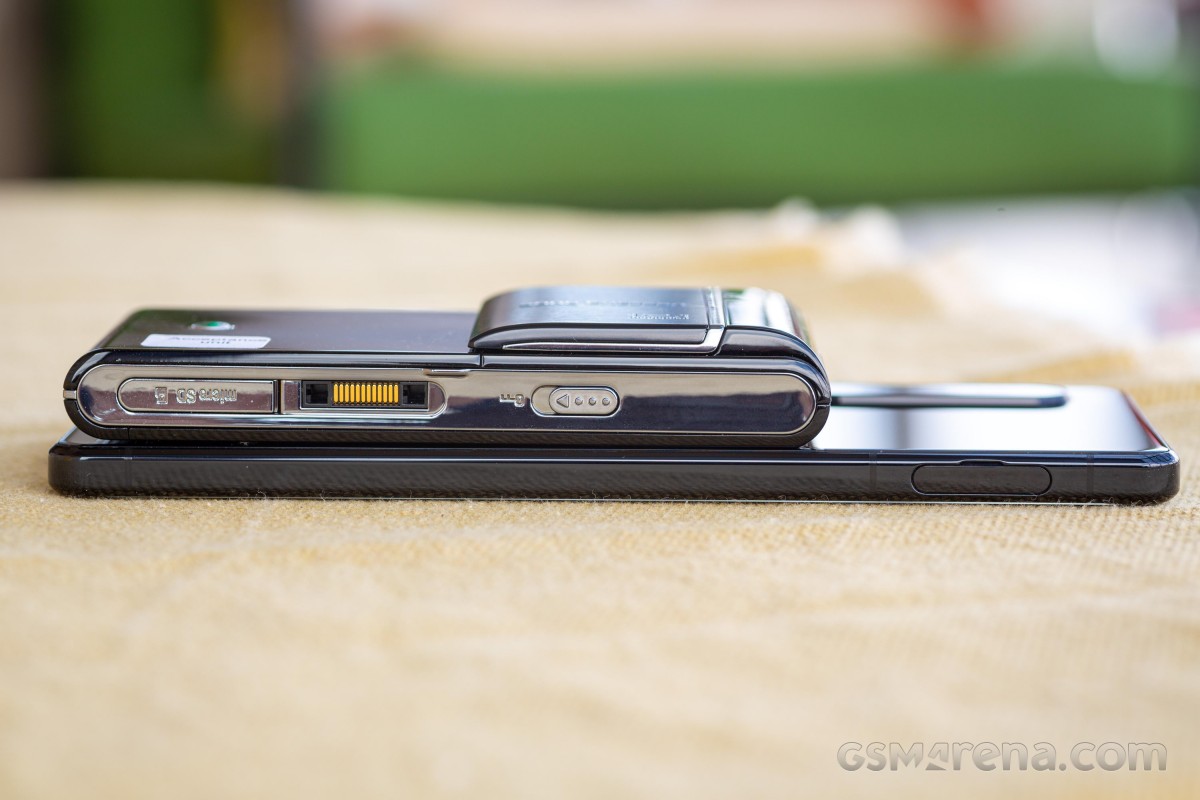 There is a microSD slot on the side – back in the day our review unit came with an 8GB card and the phone could support up to 16GB. It was definitely necessary due to the very little built-in storage.

The GPS receiver could also be used for voice-guided navigation thanks to the Wisepilot app. However, there is no way to download maps and store them for offline usage, which made this a pricey affair (data was costing a pretty penny back then). Worse, the GPS wasn’t all that sensitive and has trouble getting a lock if you are too close to a tall building.

Other features include a Flash-capable web browser (though Flash is now as dead as Symbian), a viewer for Office documents and PDFs and a Walkman-branded music player. There is a video player, but it lacks DivX and XviD support, which is a pain. 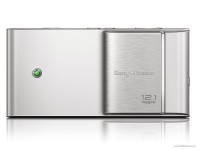 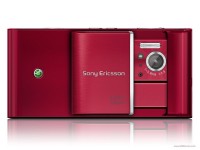 The Sony Ericsson Satio was a view of a future that never came, a future where Symbian retained its market dominance and Sony and Ericsson never split. However, the move to all-touch phones forced all companies to start from scratch and gave smaller competitors the chance to out-compete the established names. And so the Symbian future was lost.

It’s easy to blame the clunky Symbian OS for the failure of this phone. After all the camera and screen were great if not quite the best at the time. Software issues caused by carrier customizations also added to the woes and may have turned some potential customers away.

Even that aside, the Satio was a capable camera phone, but it was priced out of reach for some consumers and its plasticy build may have turned off some of those that could afford it. The Satio was a great camera but a not so great phone.

Never had this one. I had a W995 still, and was still loving it. In fact, my w995 lasted for 5 years until it's screen sliding ribbon gave up. Satio was a top dog for me back then, but I couldn't ignore that it didn't have stereo...