If you're excited for the Samsung Galaxy S8, today is a good day for you. That's because a new, huge leak is bringing us pretty much all the details about the Korean company's next flagship, including images (see below), specs, as well as unveiling and release dates. And all of this comes from the usually reliable Evan Blass (a.k.a @evleaks), so there's no particular reason to doubt the information.

There will be two Galaxy S8 sizes, as rumored before. The smaller model will have a 5.8-inch screen, while the larger Galaxy S8 Plus will have a 6.2-inch display, both of the dual-curved Super AMOLED variety, and both with an unusual 18.5:9 aspect ratio. Thus Samsung too is ditching the traditional 16:9 aspect ratio, but it's made the S8's panel even more elongated than LG for the G6 (which has 18:9 ratio). The S8's display will be pressure sensitive (think 3D Touch), but strangely only in its lower part.

The small S8 will have a 3,000 mAh battery, the bigger model getting a 3,500 mAh cell. That's not a lot, considering the huge screens here, so it helps that no matter where you buy an S8 from, it will sport a chipset built on a 10nm process - be that Qualcomm's Snapdragon 835 or Samsung's next Exynos. Both phones should come with an 11% increase in performance compared to the S7, 23% faster graphics, but at the same time 20% more energy efficiency. So hopefully that will translate into good battery life, even with the aforementioned capacities.

RAM will still be 4GB, no increase here from last year, but the base internal storage will be upped to 64GB, expandable via microSD of course. The main camera's resolution will remain the same as in the Galaxy S7, namely 12 MP, and its aperture will still be f/1.7. However, it will have a new visual search function, "with icons appearing on screen that allow the user to indicate the type of search to be performed (OCR-enabled web search on photographed text, for instance, or a shopping-site search for products of interest)". 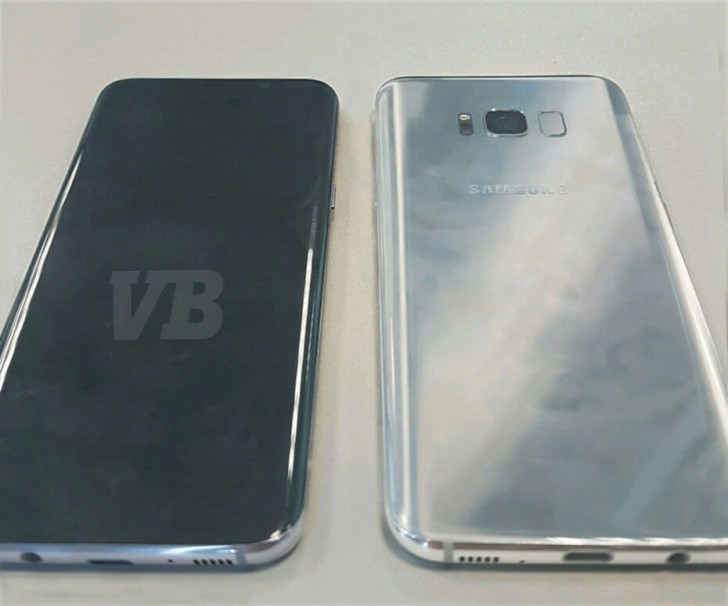 The selfie snapper will be an 8 MP f/1.7 unit with an iris scanner next to it. As you can see, the S8's fingerprint sensor has been moved to the back, though not in the place you'd expect to see it (below the camera). On the bottom side, the S8 will have a USB Type-C port next to a 3.5mm headset jack, the latter undoubtedly cause for celebration for people who disliked Apple's decision to get rid of it.

The software on board will be Android Nougat. The Bixby virtual assistant will be built into the S8 range, and it is reportedly capable of handling more complex commands than its competitors from Apple, Google, and Microsoft - multi-part instructions for example. It will be summoned by using a dedicated button on the side of the S8.

The Samsung DeX experience that has been leaked a few times so far is confirmed once again, bringing Continuum-like functionality to the phone when it's connected to a monitor and keyboard through a special dock (which will be sold separately).

Finally, here are the launch details. The Galaxy S8 will be made official at an event in New York on March 29, and will go on sale on April 21. Prices for the two models in Europe will be higher than for the S7 and S7 edge last year. The smaller Galaxy S8 will be priced at €799, while the bigger handset will go for €899.

Thanks for the tip, Naku!

Obviously if you have the edge there will batteries be a reason to upgrade. But no. Battery life will not be the same. And the point of the new chip is for technology advancement. Sorry you don't care about it or expect huge leaps every generat...

As Galaxy S7 edge user, I don't see point in upgrading. My main targets are camera, battery life and performance, and looks like the first two will be virtually the same. New processor again, come on, even Snap 808 is still capable of steady performa...

Take RAWs of both, process them on computer with Lightroom, you will get a different result.