Google is preparing to launch its 2018 flagships, usually debuting in early October. Yet we don't have to wait another three months to know what they'll look like as some renders filled us in today. .

The images and video confirm that the Google Pixel 3 will have a normal forehead, while the Pixel 3XL variant will implement the infamous notch. 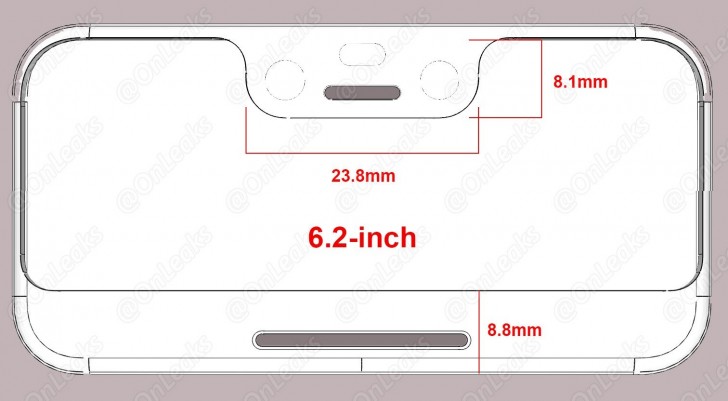 Both phones are also pictured with only one camera on the back, suggesting Google is still not joining the trend of dual and triple cameras.

The Google Pixel 3 will measure 145.6 x 68.2 x 7.9 mm. It is expected to have a 5.4” screen with tall 18:9 ratio. There are three holes next to the earpiece, most likely for a camera, proximity sensor and LED notification light, although it might also be a dual selfie setup.

The Google Pixel 3 XL will stand at 158 x 76.76 x 7.9 mm, but along with the camera bump the thickness goes up to 8.6 mm. The screen will measure 6.2” in diagonal and the notch between the so-called “horns” will house the very same camera and sensor as the Pixel 3.

Both phones are expected to come with Snapdragon 845 chipset and Android P out of the box. Last year’s Pixel 2 series had an OLED panel on both devices, so its safe to assume the Pixel 3 and Pixel 3 XL will use the same type of screens.

Both the inaugural Pixel and the Pixel 2 series were announced on October 4, so you better save the date for the Pixel 3 launch as well.

I believe this pic doesn't do it justice so wait till final comes out as the back looks like it has both 2 tone textured glass which is thoughtful design for less fingerprints. I just compared Pixel 3, Pixel 2 and HTC One A9. Pixel 3 looks good.

Actually glad that the Pixel 3's design is now professional looking. Pair this with 6GB of RAM and a 256GB storage and I'm sold.

do you live under a rock? they already did with the Pixel 2, that thing doesnt have a jack