The upcoming Google Pixel 3 XL has had its fair share of leaks over the past two months but they are mostly photos and we still know relatively little about its specs. We've already confirmed the single camera setup on the back, the notched display design and we even got to see one in white. 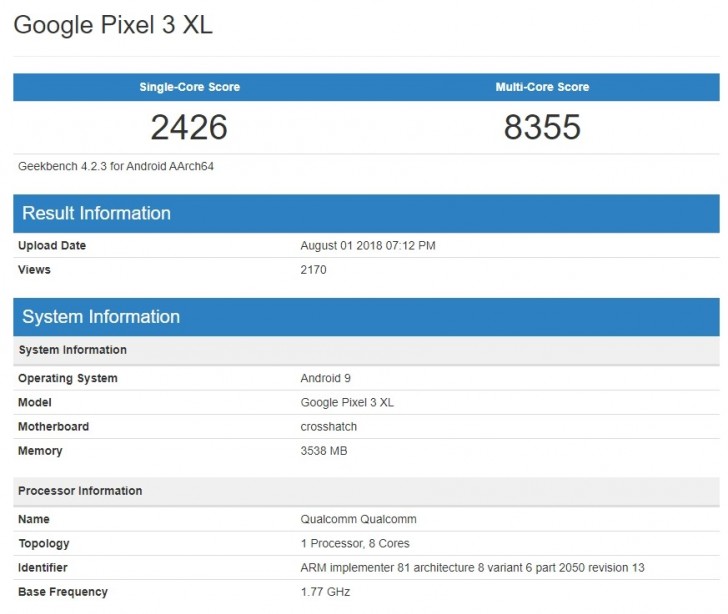 Today's leak, however, is more about the internals. A Geekbench listing shows Google's Pixel 3 XL running the benchmark with Snapdragon 845 chipset, 4GB of RAM and Android 9.0 P. The chipset isn't really a surprise since the SD845 is a logical upgrade over the SD835 on last year's Pixel 2 XL but just 4GB of RAM?

Don't get us wrong, though, 4GB of RAM is perfectly fine for the vast majority of users and the Pixel 2 XL is doing pretty good with this amount of memory, but in 2018 most of its competitors offer at least 6GB of RAM.

On the other hand, judging by the relatively low score that the device achieved compared to other Snapdragon 845-powered devices, this could be an early engineering sample so the final version could still come with better performance and more memory.

Google is developing a censored search engine for China

There won't be a better camera on Pixel. It's just software magic that comes with Google being one of the biggest software companies in the world. Whereas Samsung might very well be the Umbrella corp of the real world.

You are the type of person that would be screaming 1gig ram is enough in 2017.

Nope he's just a typical Murican that thinks they are the world.