You can call the Pixel 6's design anything, but 'generic' would just be wrong. In a time of countless nondescript rectangles, Google's rectangle may be the same on the front, but it's like no other when viewed from the back. 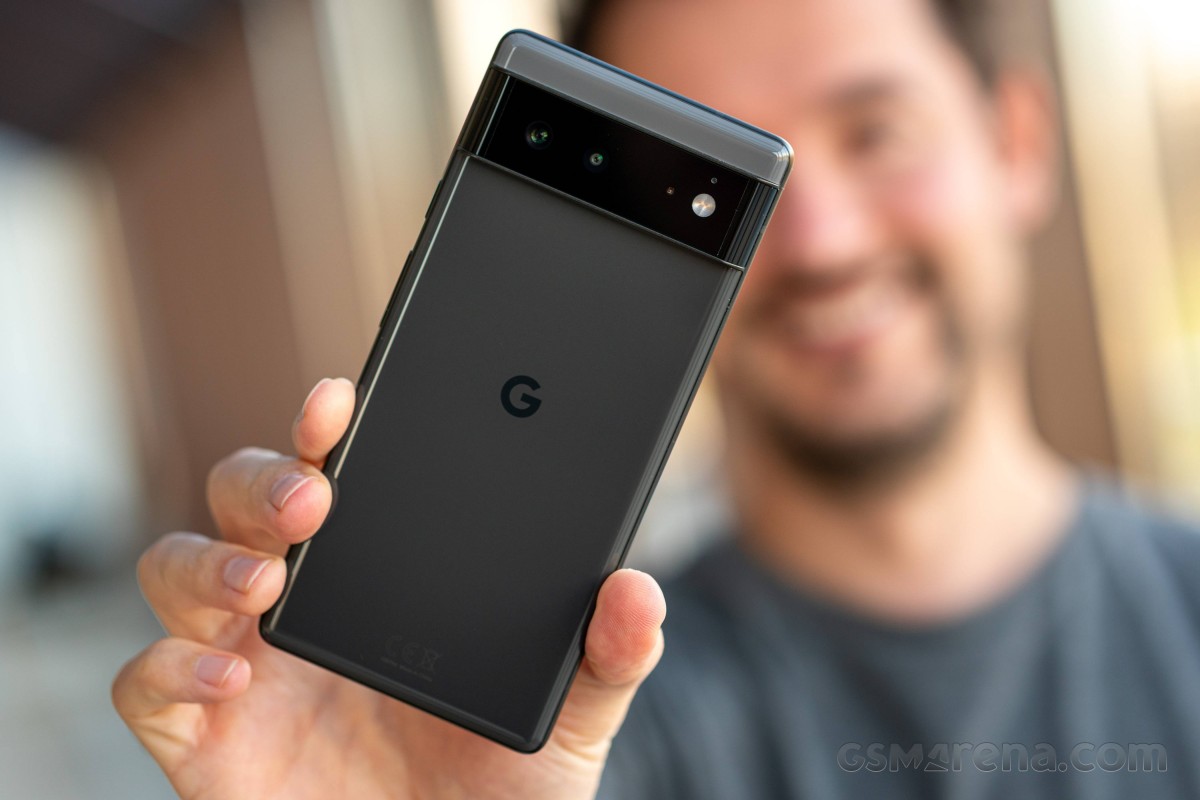 The camera strip is the defining feature of the 6s' design. The Pixel 6 non-Pro here has the same visor-looking camera assembly as the Pro, despite being one telephoto module short. Spanning the entire width of the phone, the strip affords ample room for the two cameras, an LED flash, laser AF emitter/receiver, a 'spectral and flicker sensor', and a mic. 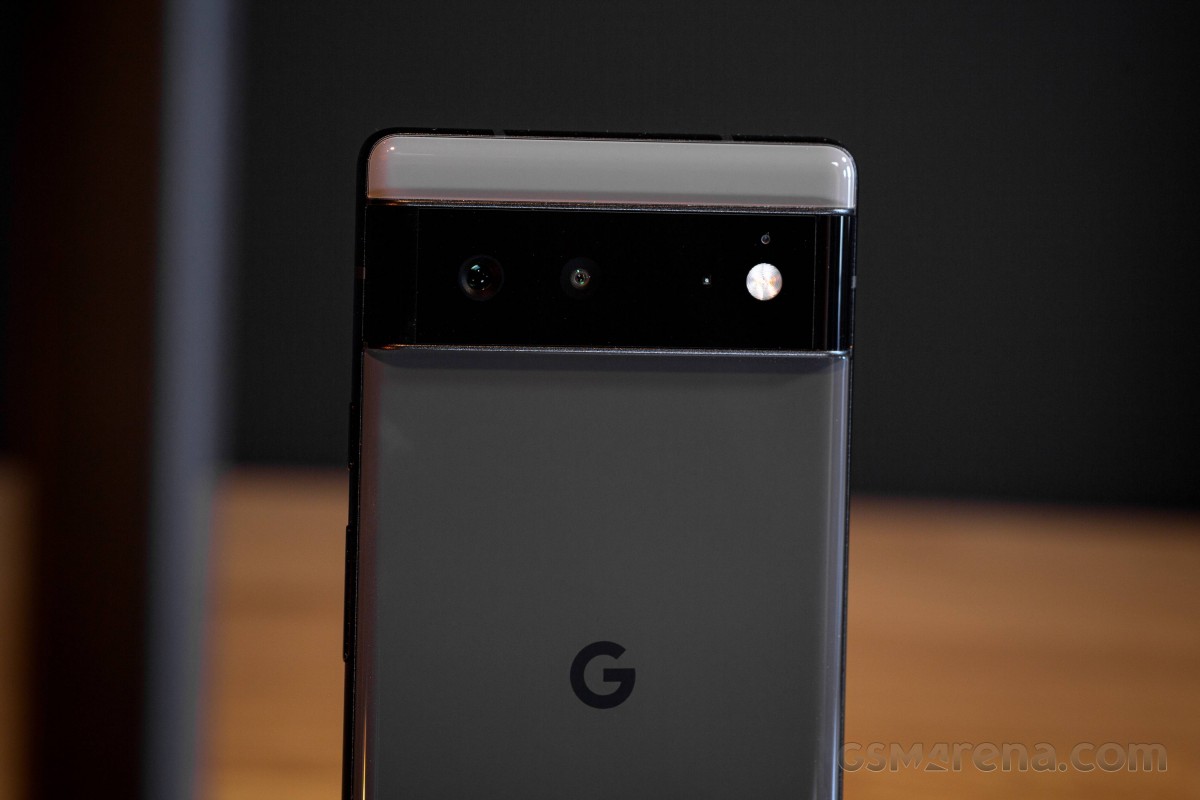 The visor sticks out by nearly 3mm from the back, but since it goes all the way from one end to the other, it doesn't cause any wobble. That's the good bit. Less so is the tendency for lint and dust to accumulate along the edges of the camera strip. 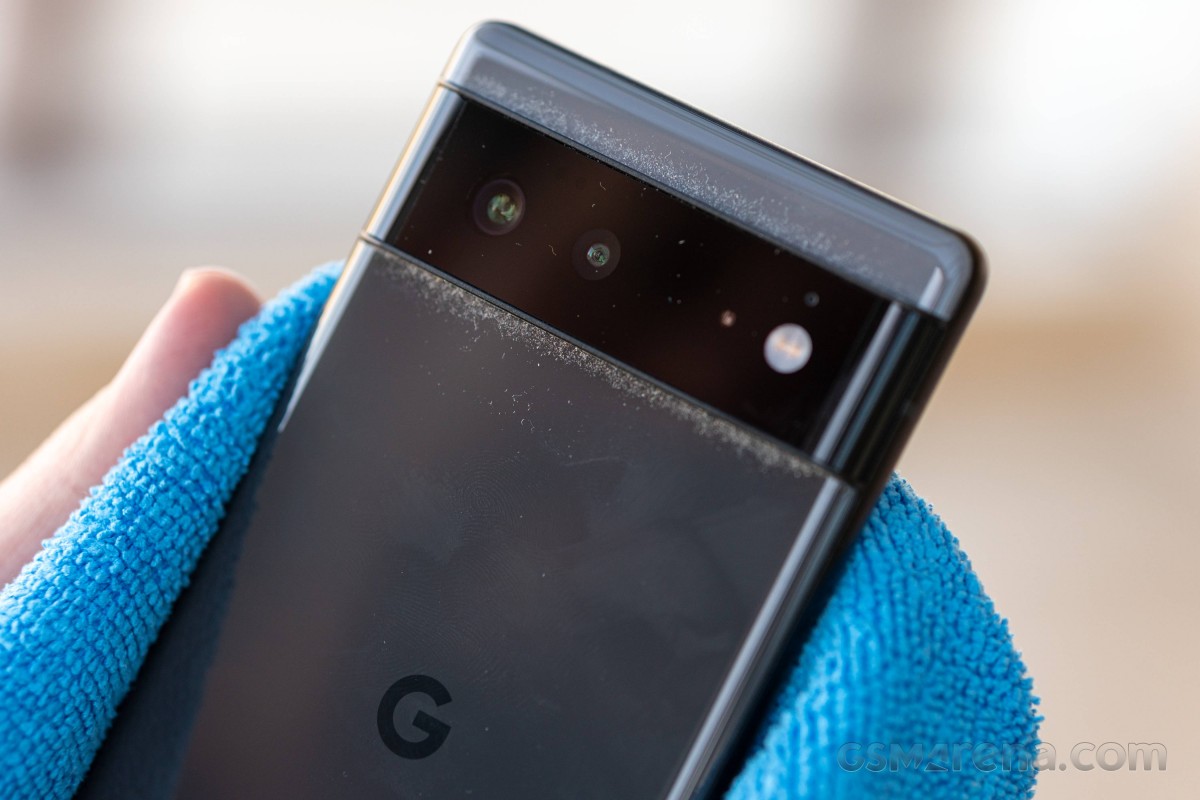 The camera 'visor' is a lint magnet

The Gorilla Glass 6 back picks up its share of fingerprints, no glossy glass panel is immune to those. It's about as grippy as the rest of them, too - better than a frosted panel, not great in the grand scheme of things. A unique feature of the Pixel 6s is that you can, in a way, hold them by the camera assembly or prop them with an index finger to lift some of the weight of your pinkie. 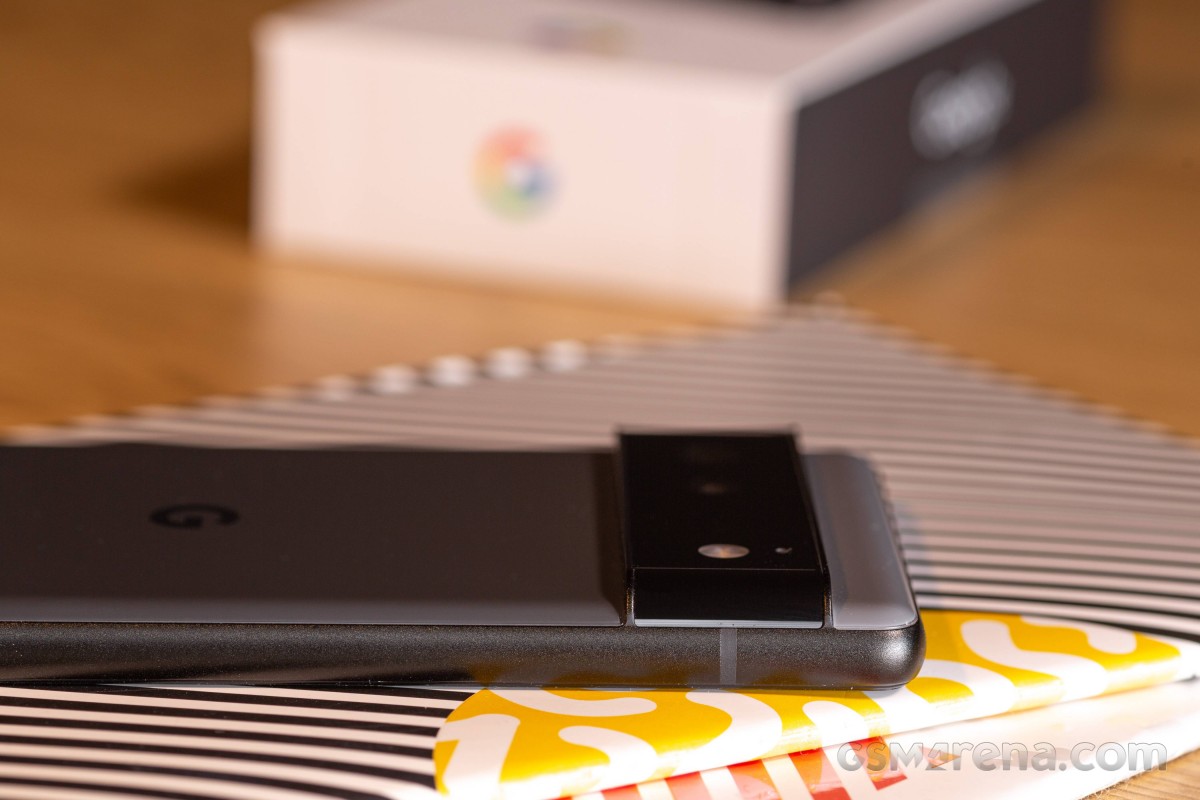 Each of the three color options comes with a two-tone look, the portion above the camera island getting a different hue than the large panel below. Our Stormy Black review unit is, in fact, primarily dark gray with a lighter gray accent band on top.

The Kinda Coral variant only made a brief appearance at the office, and 'kinda' is warranted - only the accent strip is coral in the way we understand colors, while the rest is a much paler hue. Sorta Seafoam is the one we haven't seen, the spiritual successor to the Sorta Sage Pixel 5. 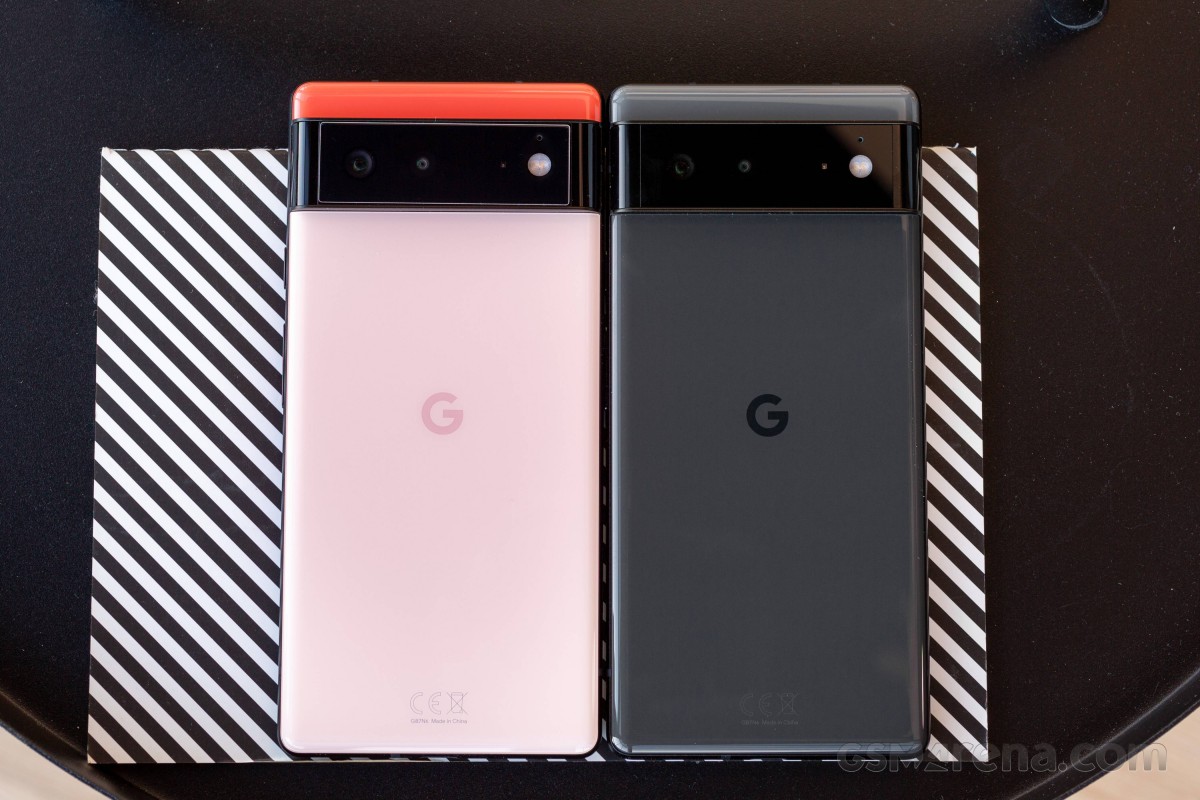 Speaking of design accents, gone is the colorful power button; it's black this time around regardless of color option. That goes for the frame, too, the matte aluminum coming in black only. It is matte, too, as opposed to the glossy finish of the Pixel 6 Pro's frame, and we dare say this one is less grippy.

The power button is on the right side of the phone, above the volume rocker - a Pixel oddity that takes some getting used to. If you're coming from an older Pixel, you should be right at home, but if this is your first one, prepare for involuntary volume adjustments or taking random photos when trying to put the phone to sleep. 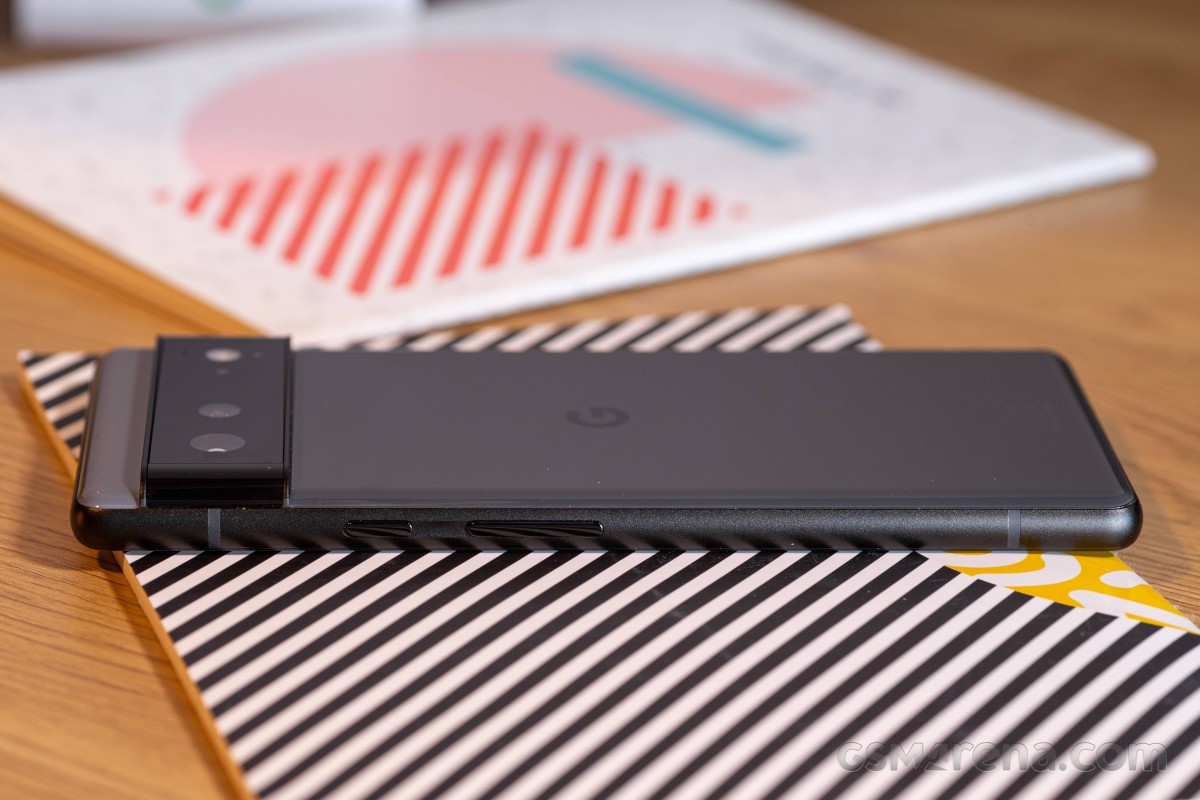 On the opposite side of the phone, about a quarter up, is the SIM card tray. It'll only accept a single nano-SIM with a provision for eSIM if you want to have two. There's no microSD support, nor has there ever been. Unlike other phones that almost make it a point to advertise, the gasket around the card tray is made black and inconspicuous here but fret not - the Pixel 6 has an IP68 rating for dust and water resistance.

The bottom hosts the USB-C port, which is lined on the inside with plastic. Two identical-looking cutouts in the frame make way for the primary speaker and the primary mic. Another mic pinhole can be found up top.

SIM tray on the left • USB-C port, speaker, and mic on the bottom • Another mic up top

Over on the display side, we're seeing that flat AMOLED display surrounded by a bezel with some... presence. We wouldn't go so far as to call the black borders thick, but they're certainly not minimal either. The glass itself does gently curve towards the outer edges, making for a more premium-feeling swiping action. 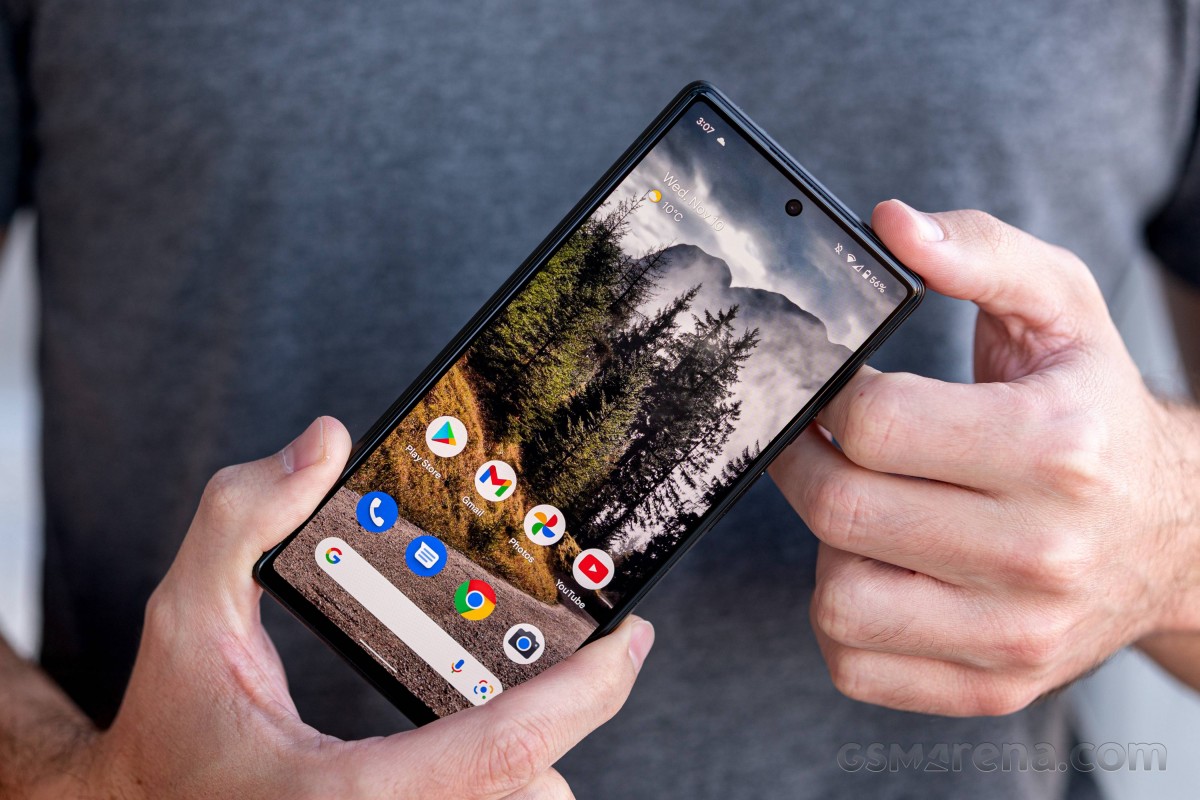 In any case, the Pixel 6 Pro does have a more 'expensive' look, a sentiment coming from both the curved-edge screen (which, we know, has vocal haters) and the thinner borders.

The Pixel 6 has a punch hole selfie camera in the middle of the top edge of the display. Above it is a long thin slit that has the earpiece blasting from the left end while the rest is seemingly just for symmetry. 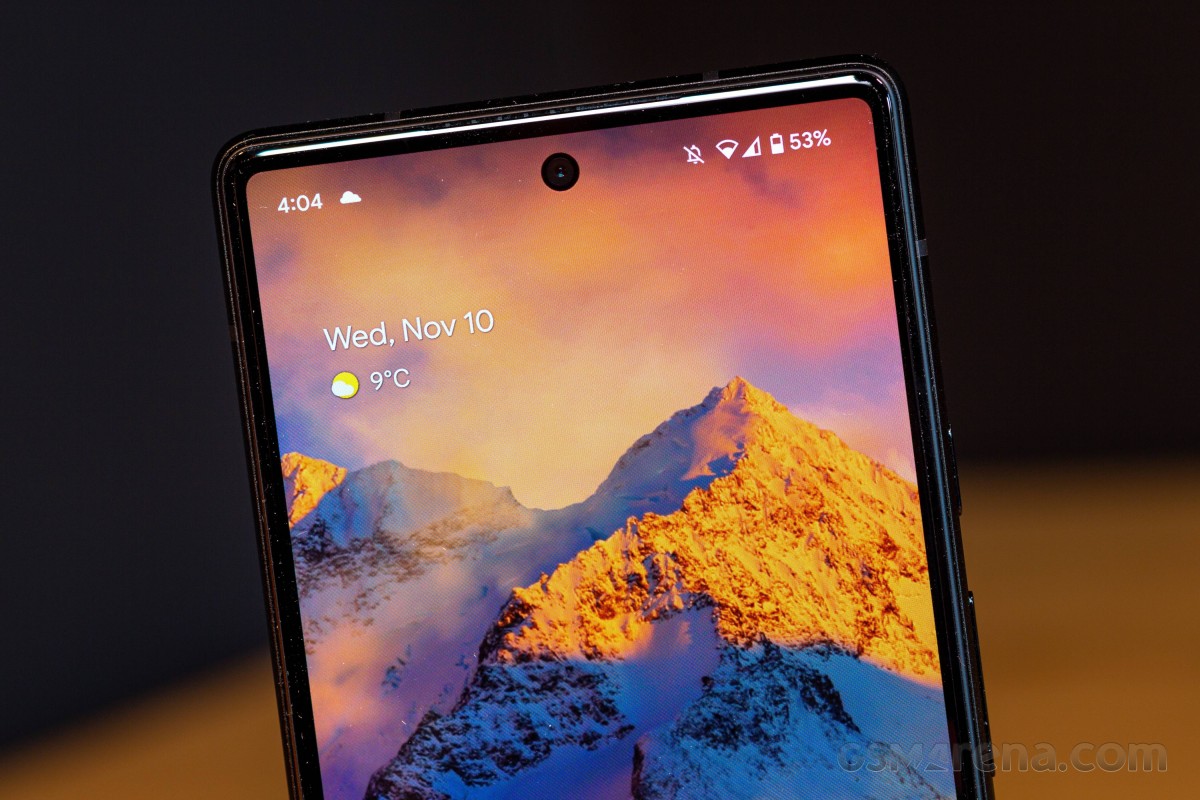 An under-display fingerprint reader of the optical variety is placed a little over a quarter of the way up the central axis of the screen. We usually complain about FPRs being too low; this one is a notch too high, but finding it becomes second nature soon enough, and it's not like it requires stretching.

It's not the quickest around and won't work with a brief tap - it takes a marginally more deliberate press to unlock, but we wouldn't say it ever kept us waiting. 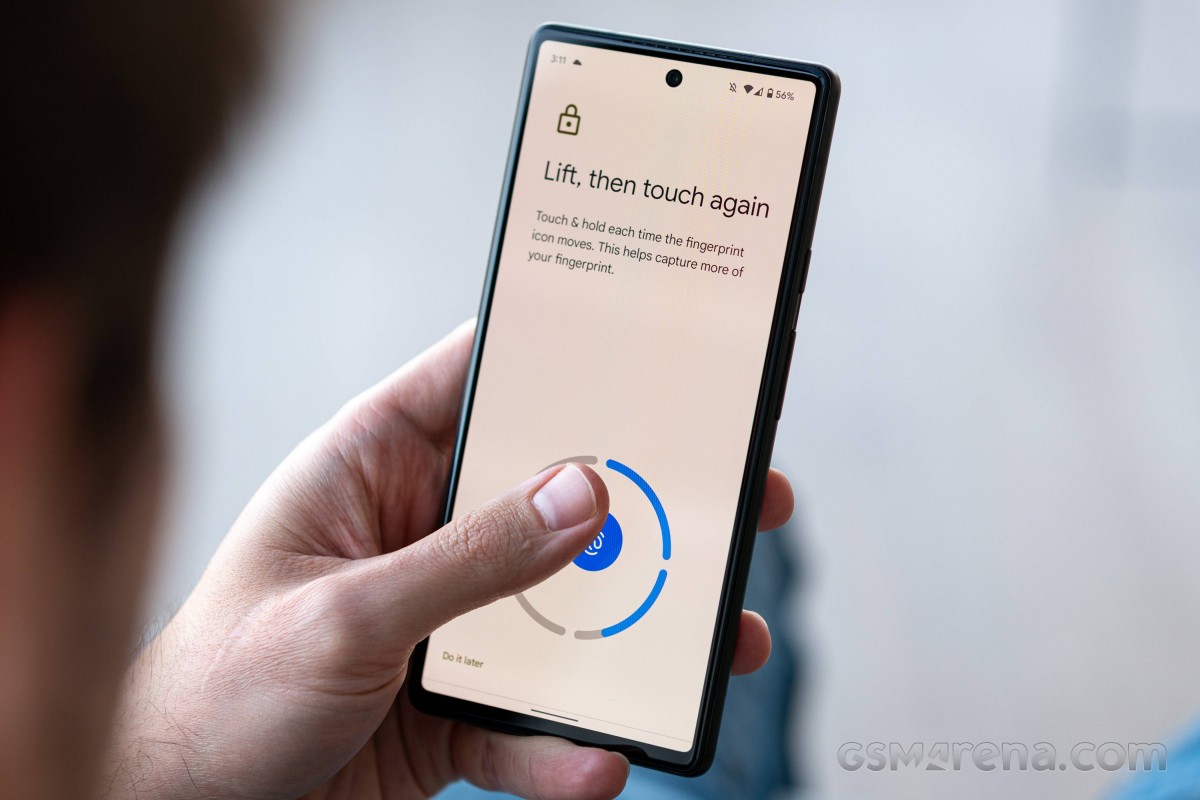 The Pixel 6 measures 158.6x74.8x8.9mm and that's just 5mm shorter than the Pro and a single mil narrower, both phones having the same thickness. The non-Pro is then no mini Pixel no matter how you try to spin it. The 207g shown on the scales make no promises for pocket-friendliness, either - that's more than the Galaxy S21+ or the iPhone 13 Pro. The extra 3g on the Pro are immaterial at this point. Try signing up for the beta modes for your messaging and phone apps. This fixed the connectivity issues I faced with my Pixel 3a XL.

I'm sorry. Did I just hear you say 'grandson'? Congratz! I'm surprised you made it this far.

I’m In Egypt using Japanese model I love the phone by I have one issue Volte is not appearing in the options so once I receive any call the phone switches to 3g or H+ do you have solution Other than that phone is very good to be honest Batte...