As we approach the release date of the Google Pixel 6 Pro, it seemed like we knew everything there was to know about the upcoming Google phones. We've seen renders, spec sheets, even teardowns, camera samples, and pricing for some markets. What we're learning now is that Google may go the way of Apple and make it more difficult to get the Pixel 6 Pro fixed, particularly the camera module.

If a leaked page from the Google Pixel 6 Pro's technical repair manual is to be believed, Google appears to be pairing a triple camera module to a unique device from the factory. The document states "RL rear camera is calibrated at vendor site to secure the image/video quality post repair." This page was published to Repair.Wiki and the Wiki page mentions that a replacement module "is different from the production camera module that is paired to the original logic board." 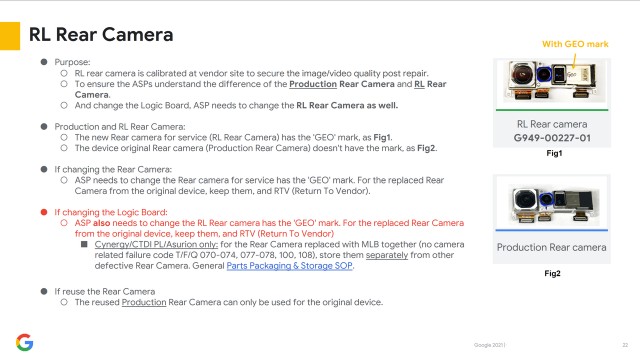 This means that one may not be able to use the camera module from an existing Pixel 6 Pro and install it onto another device. It also suggests that a replacement module might need to be hard coded to work on another Pixel device. The same document says "If changing the logic board: ASP also needs to change the RL Rear camera has the 'GEO' mark. For the replaced Rear Camera from the original device, keep them, and RTV (Return To Vendor)."

In a YouTube video, Louis Rossmann explains that since Apple has made camera module repairs with the iPhone 12 more difficult to perform outside of Apple's authorized repair network, other vendors may see this as an opportunity to do the same. There's no accusation that Google will make third party or DIY repairs more difficult, but the clues are leading in that direction. Still, this would have to be confirmed by actually taking apart two Pixel 6 Pro devices and swapping the camera modules to see whether they work or not.

Rossmann wonders what the benefit is to pair a camera module to the logic board. The leaked document claims it is "to secure the image/video quality post repair." but this statement is met with skepticism.

A cache of Pixel 6 images leaks, confirming features we already knew about

How dense can you be? What you don't understand about "NO OTHER CHOICES AVAILABLE"?

Not buy when a product or design isn't satisfying, it just makes sense. You seem like a typical emotional person who quickly disrespects and believes that he can change something with off topic dramas.

Seriously... Minorities vs majority ? Let the unhappy minorities buy another brand so.