After receiving a hefty €4.3 billion fine from the European Commission over unfair practices, Google is issuing a fix by offering EU users alternative search and browser apps through Google Play. In a blog post, Google’s Product Management Director, Paul Gennai revealed that you will see the new app recommendations screen when opening Google Play after updates. 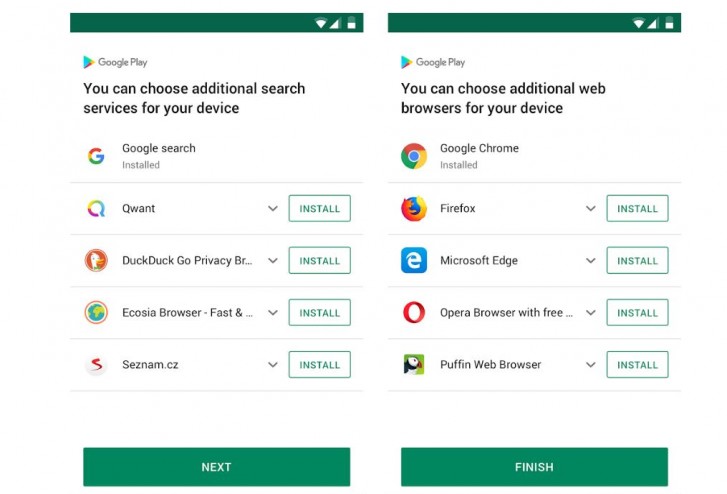 From there you will have the choice to directly install the recommended apps and will be guided through the setup procedure, including setting the new search engine or browser as default. Google says the recommended apps shown will be based on their popularity in a given region and will appear in random order. From the provided illustrations on the blog post we can see that search options include Qwant and DuckDuck Go while browser recommendations feature Mozilla's Firefox, Opera, Microsoft Edge and Puffin Web Browser.

Google has faced a tough battle with EU legislators, which accused the Internet giant of forcing phone manufacturers to preinstall Google apps like Search and Chrome on Android devices. While Google claims phone makers were free to choose what apps they include on their phones, manufacturers were not allowed to include a single Google app like Maps without pre-installing the full Google apps suite which includes Search and Chrome. Google stated it would begin licensing its apps to device makers to combat the issue and offer more solutions in the near future.

The new app recommendations will begin appearing on existing and new devices in the coming weeks across Europe.

I actually feel it's time for some alternative to android to appear. Its getting too far from the open source system and deep into google bloatware.

The phone is unlocked and bought from Samsung shop. Among those 168 apks, there are a lot of system apps like Bluetooth, nfc, blue light, Bixby, camera stickers and a lot more that I simply never use. So there's no point in letting them drain reso...

Can't we already do that?