Last week we heard that Sony is working on an Xperia smartphone with a total of eight cameras - two on the front and six at the rear. Back then we didn't have any information about these snappers on the smartphone, but now a new leak aims to fill in the gaps.

The source claims that the Xperia smartphone will sport a 10MP unit on the front paired with a 0.3MP ToF camera. And around the back, it will have a 48MP snapper with a variable aperture of F1.2/2.4. This will be joined by a 12MP module which too will have F1.2/2.4 aperture.

This hexa camera setup will also include a 0.5MP ToF unit, with the rest of the modules having a resolution of 20MP, 8MP, and 16MP - all having an F2.4 aperture. 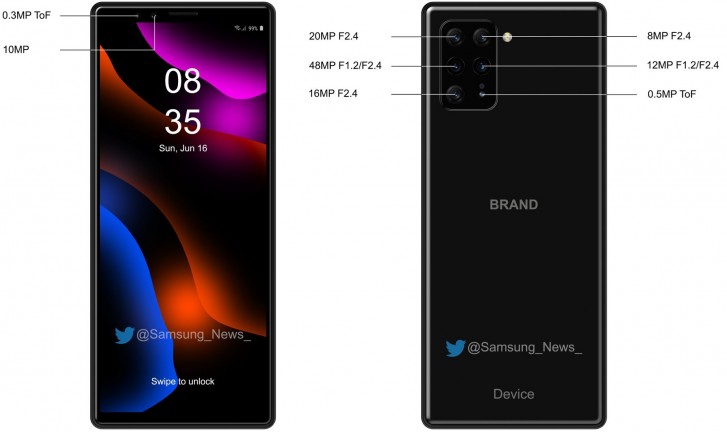 The main sensor and the ToF unit in this camera system are likely to be accompanied by a wide-angle and a telephoto unit. But there's no information about the purpose of the remaining two modules.

Having said that, these specs shouldn't be considered as certain until more hard evidence come up to support them.

Sony is way way behind Samsung on the phone sector... They will not catch them. They will need to concentrate on how to make god quality phones moving in the market.

What is not even close?Do u not see the headphone jacks on them???

Max J is the Samsung news blogger, do you believe he corcern any Sony news!? It must be fake.