It's no secret that Huawei is working on a successor to its Kirin 970 chipset and will stick it inside the upcoming Mate 20 lineup. Oh, and if the leaked benchmark results from April are to be believed, we expect great performance and power efficiency gains thanks to the 7nm manufacturing process by TSMC. 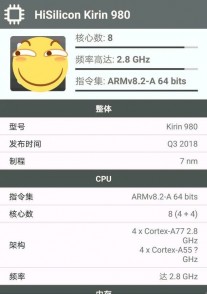 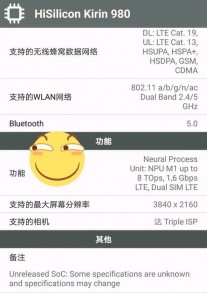 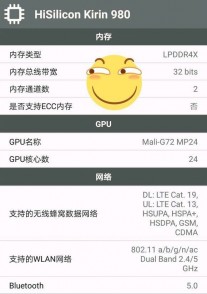 Screenshots from the app

Now a new report confirms all of that and adds more details to the overall picture. According to the screenshots snapped from what seems to be an app that collects information about rumored and released SoCs, the Kirin 980 will run octa-core CPU in 4x Cortex-A76 (misreported as the A77, which doesn't exist) + 4x Cortex-A55 configuration. The first cluster is clocked at 2.8 GHz while the clock speeds of the small Cortex-A55 cores are still unknown.

RAM is listed as LPDDR4X, which is unsurprising, and we also got a confirmation of the Mali-G72 MP24 GPU. With twice the number of cores it should be a massive upgrade over the Mali-G72 MP12 found in the current Kirin 970 SoC.

The specs sheet mentions a second-generation NPU to deliver those AI-driven features and a triple ISP to make the image processing faster. And it's probably safe to say that the Mate 20 Pro will go for a triple camera setup, just like the P20 Pro.

The chipset will be announced at IFA on August 30, followed by the debut of the Mate 20 series in October.