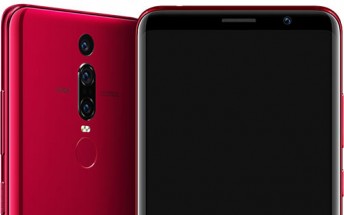 Huawei Mate 20 should be going official this Fall, but it has already leaked on AnTuTu. Apparently, someone with access to the device ran the popular benchmark on it and the Mate 20 scored miles ahead of the current flagship crop.

The Mate 10 was the one to introduce the Kirin 970 chipset last year. The most recent P20 duo is innovation the camera department while keeping the same 970 chipset. Naturally, the next Kirin 980 will be premiering on the next Mate 20. But thanks to this AnTuTu score we can get an idea of the upcoming performance jump.

The Kirin 980 is rumored to use Cortex-A75 high-performance processor cores, bring a second-gen NPU, and a lot more powerful GPU. The whole thing will be manufactured on TSMCs cutting-edge 7nm process that should translate into smaller footprint and improved power efficiency.

There are six months of waiting ahead of us, but the Mate 20 already looks very promising. It should be packing the new Leica Triple Camera, the new chipset and an under display fingerprint sensor, so color us all intrigued.

Ahh the Zenfone 3 Ultra, that was a nice phone, I had the vanilla ZF3 (SD625) and it was a bit sluggish. The 660 is still quite oomphy tbh, but K980 will absolutely kill it. Also the 23mp camera on it, how is it holding up? I remember people saying...

As we all know , Huawei fakes benchmark scores .. Some guys with private Benchmark prooved that all huawei phones have + 50 % score as they realy are !! Shame of you !!

Oh what a WOW! Huawei I call you the Pacesetters. What a serious benchmark results. AS for me I knew Huawei will never let me down. I have bought many Huawei phones than any other phones. Great Huawei good work done. You have really shown a way in th...