HMD schedules an event for October 11

Later this week: an HMD event in London on October 4. Next week: another HMD event on October 11. What’s going on?

It is widely believed that we’ll see the Nokia 7.1 Plus (aka Nokia X7) this week. Indeed, the October 4 invite promises “the latest addition to the Nokia smartphone family”. The spec sheet of the Nokia 7.1 Plus was laid out for all the world to see by TENAA. 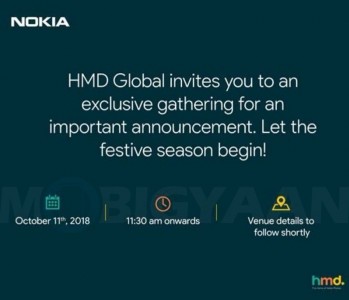 HMD is preparing three phones based on recent findings, including the Nokia 9 and what could be a gaming phone, so those are potential stars of next week’s event.

However, the new invite (delivered to Indian publications) only mentions “an important announcement” and a festive season. There’s a good chance this is a local launch of the 7.1 Plus.

Three new Nokias spotted in the ARCore database: Nokia 9, 7.1 Plus and one more

Nokia 5.1 Plus launched in India

Sounds great i really hope for something like that.

We want to see the Nokia 9!