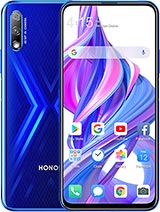 alllli, 21 Oct 2019If HONOR release the global version of Honor 9x with kirin... moreTotally agree. Kirin 710 is so weak and outdated. What's wrong with Huawei this year? After releasing Honor Play 3 and Huawei Y10 equipped with Kirin 710F, now they are going to downgrade the global version of Honor 9x to Kirin 710F too? Wrong and stupid decision to take global market as a dumpster of old chipset.

When is the release of this phone in the Philippines?

If HONOR release the global version of Honor 9x with kirin 710, no one will buy this phone. It's really ridiculous and wrong decision

Anonymous, 16 Oct 2019Is it true that the global version of this phone will be re... morehave you ever try, kirin 710

Is it true that the global version of this phone will be released with the kirin 710?

Its finally launching in India next month

Notsure, 14 Oct 2019It's glass, not plastic, but the display is cheap glass, no... moreSo disappointed with this. Hoping for the next series to be tough just like my 7x. And 5G support as well. But I've heard the redmi k30 is coming!

Dude , 11 Oct 2019I hate that it has plastic build and frameIt's glass, not plastic, but the display is cheap glass, not gorilla, and having no gorilla on the front is worse than plastic on the back.

not waiting any more, going for oppo k5/realme X pro

I hate that it has plastic build and frame

TeK, 05 Oct 2019Because of the US ban, i don't think 9X will be launched ou... moreIt will be launching in Egypt as honor Egypt started posting pics of it saying soon.

ha, ha, I have it for a year and I know that is gorilla glass protected because I personally checked it and you have to read it to know and try the following ; ,device specifications,
or ,android beat, or ,bin,too shoots, etc, the names for pages are split in two or 3 because of posting rules and you write them into one

Honor should start providing AMOLED display. Everyone is giving in same price range.