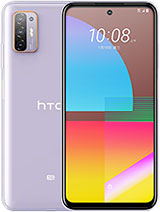 I still can't get rid of the awkward feeling of seeing HTC branding on a modern phone. It's not normal and it's not something I can get used to.

Htc do what LG did. R.I.P legend

World first Android phone was made by HTC( T-Mobile G1) HTC - M series, Desire Series, Butterfly are Great
But HTC is still good however Samsung,Huawei, Xiaomi/Redmi,Oppo/Real me,Vivo are Leading in Android World HTC is Over Price and Low Performance.
Why?We Love HTC Smart Phone and We want Legendary HTC back.😎😎

Dometalican, 16 Feb 2021Uh...why can't this be done? Do you have any explanati... moreYou won't get wireless charging with an aluminum body. Everything else seems doable, but I also want Edge Sense to return with more features/functionality.

The phone doesn't have 3.5mm jack. The spec should be corrected

aziz, 05 Mar 2021htc once made legendary devices but now imitating othersHtc went downhill since the U11+

Just how unprofessional and greedy managers can be. And this ongoing for almost 10 years. Last month HTC revenue has cleared the anti-record again - just $8 mln.

What's more, HTC unveiled budget E3 on ancient budget Helio P22, which they probably found thrown away in some waste facility, and position it as flagship.

htc once made legendary devices but now imitating others

Anonymous, 15 Feb 2021How is that going nuts ? you mentioned a random bunch of st... moreUh...why can't this be done? Do you have any explanation? If it's money, duh. It's just a matter of HTC getting funding. What's preventing them from doing this?

Dometalican, 11 Feb 2021Wanting HTC to go nuts, they should do this (Codenamed Erup... moreHow is that going nuts ? you mentioned a random bunch of stuff you probably know zero about.
Anyone can copy and paste spec and components

Where to buy in EU?

Wanting HTC to go nuts, they should do this (Codenamed Eruption):

Same camera but with added ToF sensor in the back and 8MP Ultrawide selfie cam in the front added.

16MP selfie (same as above)

Throw in 2 OS updates minimum and 3 years of security patches minimum, and you've got yourself a solid trio of devices for solid prices. Great way for HTC to come back into the fold. They only need these three and maybe one or two more devices for the year.

its a very good come back for htc if the above specs are real, htc was the world first smart phone maker though used to make xda palms, pda and windows mobile phones as early as 2000. They have all the experience to achieve the best quality phones not forgetting the sterio grade sound. if it was not for global marketing challenges, Htc would be neck to neck with apple regardless of the platform used on apple phones. if this is the phone has a 3.5 music jack and the mentioned specs, believe or not , its the best phone for 24bit -32 bit music played through the intergrated stereo amps. i will go for it.