The left side of the HTC One Max houses the knob that releases the back panel. The detachable back plate is the other big difference when comparing the phablet to the international version of its One sibling.

The back panel release

The back of the HTC One Max is way busier than those of the One and One min. You get the familiar cutouts for the 4 megapixel camera lens and its LED flash, but there's more going on this time around.

Right under the camera lens sits the fingerprint scanner. HTC has stayed mum on what makes it tick, but it confirmed that the sensor here operates differently to the Apple's Touch ID. Not that we couldn't have figured that out by ourselves as the One Max requires you to swipe you finger over it, rather than just place it on top.

The good news is that we found the One Max fingerprint scanner to be quite quick to react and accurate enough to be actually usable. We'll pay the feature and its functionality a bit more attention later on.

The other elements of interest at the back are the secondary microphone used for noise cancelling and the pogo pins that are used for attaching the battery-extending Power Flip Case.

A look at the HTC One Max back

Despite featuring a removable back panel, the HTC One Max doesn't grant you access to its 3,300mAh Li-Po battery. All you get underneath are the microSIM and microSD slots. Memory expansion is a feature many have looked for in the One lineup for a while now and it's good to see HTC finally delivering.

We completed the batter test and the ample battery delivered quite impressive numbers. The final score was an exciting 81h, and the endurance in the individual challenges was great too. 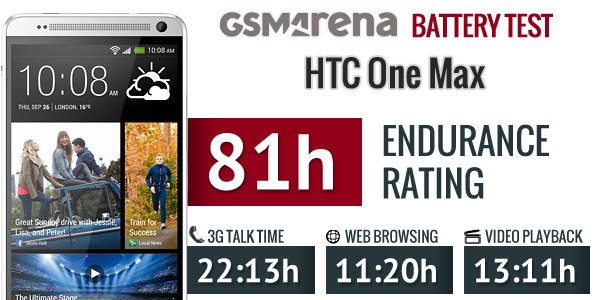 You can find the complete breakdown of the One Max battery performance over here.

The HTC One Max has a brilliant 5.9" IPS LCD screen, that has an image quality quite similar to the HTC One 4.7-incher. The extended diagonal has caused the pixel density to drop to just 373ppi, but at this point the difference is rather hard to spot.

HTC has been putting out some excellent screens recently and the One Max's display is just another example of this. The contrast is impressive and the viewing angles are extremely wide - there's no shift in colors and only a slight contrast loss at extreme angles.


The screen is laminated too, for a maximum close fit between individual layers, bringing the image as close as possible to the surface of the glass.

The only area of the HTC One Max screen performance that could be improved is sunlight legibility. It's not doing bad by any means, helped by its good brightness levels, but it's not quite up there with the best either.