HTC might be posting one negative record after another, but the company hasn't given up hope and keeps pushing out new devices. A leaked retail box of an HTC phone revealed the Taiwanese company is going to launch a low-end device with basic specs dubbed Desire 12. 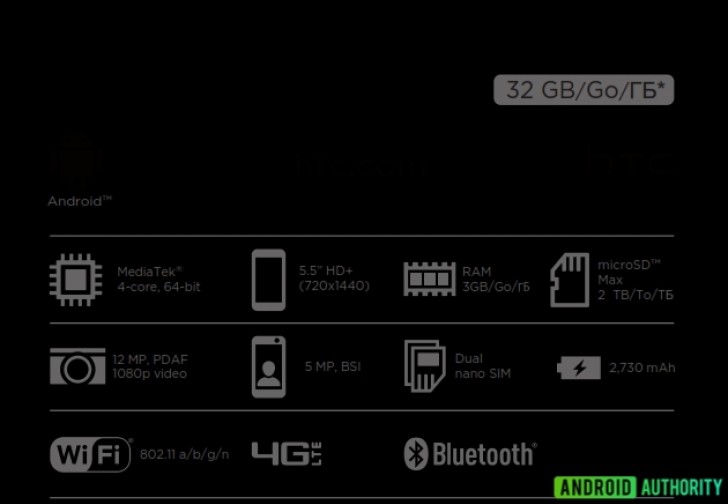 Android Authority reported that the HTC Desire 12 will have a Mediatek chipset and 3 GB RAM, coupled with 32 GB storage and a microSD slot for up to 2TB more. The display is going to be 5.5” with HD+ resolution (1440 x 720 pixels), meaning a tall 18:9 ratio panel.

There will be one snapper on the back with 12 MP sensor, phase-detection autofocus and 1080p video recording, while the selfie camera will be 5 MP. The list also reveals 2,730 mAh battery, 4G LTE, dual nano-SIM slots, WiFi 802.11 a/b/g/n and, of course, Bluetooth.

HTC could probably launch the Desire 12 along the flagship U12 that is reported to arrive at a separate event after MWC 2018.

Yup as we saw an entry level phone for a 200 bucks. What are people of HTC thinking? Crazy Mad Scary people

They always do an awesome job with their devices. 7/10 devices will be soo good that you become their fan instantly. The other 3/10 will be soo bad that they become the talk of the town. They never hit the middle. I owned their OneX.. it is soo good ...

That 4G LTE Icon is the exact same one that Verizon uses, looks like it might possibly be available on them.