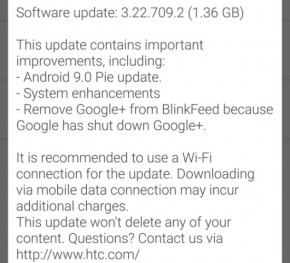 Earlier this month HTC shared some timelines for its Android 9 Pie updates, which have been very late - if you don't count the U11 Life's, and you shouldn't because that's part of the Android One program which handles things differently, with more control from Google over updates. HTC then promised to deliver the goods to the U11 first, by the end of this month. And here we are today, when the rollout has indeed started.

The big caveat here is that the update to Pie for the U11 is currently only available in HTC's home market, namely Taiwan. We're hoping it will quickly spread to other territories across the globe, but that remains to be seen.

The update arrives over-the-air as a 1.36GB download, and once you install it you'll be on software version 3.22.709.2. Expect to get all the goodies that Google packed into Android 9 Pie last year, along with some undetailed "system enhancements" on HTC's part, and the removal of Google+ from BlinkFeed because Google+ no longer exists.

Since it sold off a big chunk of its smartphone making division to Google, HTC hasn't really been very active in the mobile space anymore - not in launching a lot of new devices, and unfortunately also not in supporting past handsets with new software releases. Here's hoping that at least the latter won't completely be forgotten by the embattled company.

I'm also from Romania but I haven't received the update yet (31.08)... checked for updates but it's just not there yet, any idea when will I get it?

I got the update to Android 9 today 31.07, so I am assuming they decided to extend the update globally (or at least to more countries, not only Taiwan).