As we get closer to the HTC U 11's official launch date of May 16, we're starting to see and hear more and more of it. We've already spotted a prototype in the AnTuTu benchmark's database, as well as in Geekbench's, and today it was time for one such handset to be put through the paces of GFXBench.

Benchmarking unreleased phones is customary in the mobile world, and as always the U 11's GFXBench run has resulted in a pretty comprehensive list of its specs being outed. 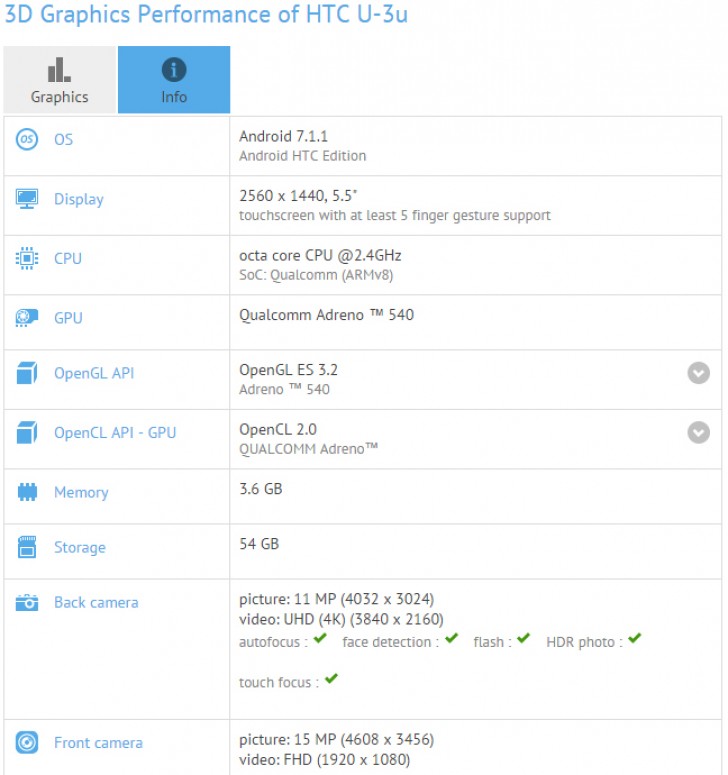 This list only confirms what we've already known thanks to past leaks and rumors. Namely, that HTC's next flagship will come with a 5.5-inch QHD touchscreen, the Snapdragon 835 chipset at the helm, 4GB of RAM, 64GB of built-in storage, a 12 MP main camera, and a 16 MP selfie shooter.

It will run Android 7.1.1 Nougat, with the latest version of HTC Sense on top, of course. The U 11's main selling point isn't among its specs, however - the device will come with a gesture-recognizing frame, so, for example, you'll be able to squeeze the handset to achieve certain actions. This has already been teased by HTC.

HTC U 11 will not have a headphone jack

We should not comment on something in air without using the product actually. It might possible that this technology might be a revolution. Its the same case as if ur phone dont have finger print sensor don't make any difference but if u have on ur p...

Great specs but this phone looks like an evolution rather than revolution. HTC is building their grave. I highly doubt the squeeze gesture will be useful. That honestly sounds stupid I prefer to have something tactile like the fingerprint scanner on ...