Huawei hasn't really been experimenting in the camera department. 13MP seem to be the sensor of choice lately, with only a few exceptions like the Honor 7 and P8max breaking away from the crowd with higher resolutions. The G8 follows the same trend and is fitted with a 13MP sensor, just like its bigger sibling - the Mate S.

Sadly, however, that is where the similarities with the higher-end model end. While the Mate S comes with a RGBW BSI sensor - a 1/2.6' type - and an f/2.0 aperture lens, the G8 has none of these bells and whistles and even though a quick look through the basic specs and a glance at the back of the phone with its dual-LED flash design, can definitely give off the false impression that the G8 shares a camera with the Mate S, that is definitely not the case.

While the G8's camera does a pretty good job, it is a definite downgrade in every way from the Mate S shooter. Still, it does offer OIS, which is definitely the one feature we would leave intact as well, if given the choice. 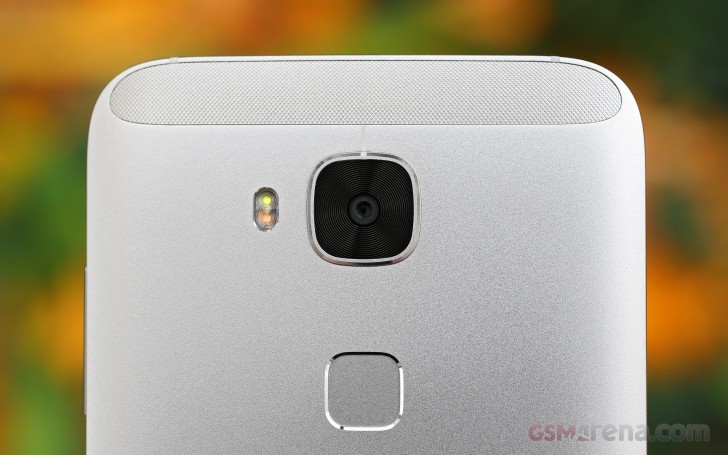 The camera interface is a very clean and simple. On each side of the virtual shutter button you get swipe controls that will take you into the photo, video, Beauty, Time-lapse and Good food modes. To activate the Burst mode you just need to press the camera shutter longer. However, while shooting bursts, the G8 exhibits some odd behavior - every now and then, it will capture a shot with a totally changed exposure, then go back to normal in the next one. Focus also seems to drift from time to time while in burst, which is odd, considering it should be fixed to begin with.

A few things have been moved around since previous version of the camera app. On the left side is an advanced menu where you can choose from more shooting modes such as HDR, Panorama and adjust things like object tracking, smile shutter, touch to capture switch, geo-tagging on/off, ISO, white balance, and more. Also the All-focus mode has been moved to this menu.

A few things are, however, missing from the menu, when compared to the Mate S. There is no Super Night mode, which is all but fair, considering the absence of the RGBW array and the fact that the G8 isn't marketed for its nighttime photography. This is also probably why the interesting Light painting mode is missing.

However, it is difficult to justify the absence of Pro camera mode with manual controls. Or the absence of the document scanning feature, which honestly doesn't require an advanced camera hardware to operate.

Easy to use camera UI

The all focus mode is similar to Refocus on the Lumia phones - your phone takes a few pictures of the same scene and allows you to choose the focus later, including all in focus. It works nice and hiccup-free.

The Huawei G8 captures decent quality still, but there is more to be desired in terms of quality. As already mentioned, despite the apparent similarities in the general camera specs, the G8 can't really compete with the Mate S in this department. Photos definitely lack in terms of edge-to-edge sharpness, as well as resolved detail, but the worse part seems to be the high noise levels. Granted, outside conditions were less than ideal, but even then, noise is a bit too much for our taste. On the plus side, the G8 has accurate colors and OIS works beautifully. Maximum resolution for stills is 4160x3120 pixels.

The HDR mode is a hit and miss situation. It works great most of the time, bringing up even more detail in the shadows, without sacrificing the image quality, but it does result in odd processing in some cases. The effect is nice and subtle, but it is heavily dependent on the lighting conditions and triggering it sometimes resulted in no effect whatsoever, or an undesired amount of darkening.

Up close, the Huawei G8 does a pretty good job of focusing as well. Here are a couple of macro photo to prove it. It has no problem focusing from an inch away.

Huawei has always had a way with panoramas. The G8 takes high-res panorama images, with great stitching, excellent contrast and very good detail levels. It might not be as good as the Mate S, but we would definitely count on it for a panorama shot.

The 5MP front camera produces nice shots, especially considering the mere 5MP is has to work with, so, we can't really be too picky. The camera app also has a "Beauty mode" enabled by default and it works as advertised, although we personally find the results somewhat a bit over the top. Here are a couple of selfie samples.

We've uploaded the full resolution (13MP) photos to our photo quality comparison database so you can compare it against other high-resolution smartphones.

The Huawei G8 offers 1080p videos at 30fps. Sadly, there's no 4K recording, which is perfectly natural, since the Snapdragon 615 only goes up to 1080p. There is a dedicated viewfinder for clips so you surely won't get the field of view wrong.

Videos are stored as MP4 files and rather surprisingly have a bitrate of around 22 Mbps, which is twice as much as the Mate S does at 1080p. There's stereo sound at 96Kbps, but the framerate varies quite a bit, though generally stays closer to 29fps than to the promised 30.

In comparison the Ascend Mate7 put out a solid 25Mbps 1080p video at 30fps from its 13 MP camera. The Huawei P8 however suffers from the same bitrate limitation as the Mate S, so, we can clearly see that Huawei is having some trouble in the software department.

Just like with the still, quality is alright, nothing really special. More resolved detail can be desired and the same goes for sharpness. Dynamic range is also lacking.

Here is a sample we've uploaded on YouTube for you.

We also uploaded video samples from the Huawei G8 to a video compare tool, so you can check the quality for yourself.

My Huawei G8 has an entire internal memory of 2Gb. Please what is wrong with the phone but I can't install apps.