Huawei really likes to unveil the Honor 8. It likes it so much, in fact, that it's already done it not once, not twice, but three times. The first announcement took place in China in July. Then last week it introduced the phone in the US, and today it's Europe's turn.

At a special event in Paris, the Chinese company revealed the Honor 8's pricing in the Eurozone. Two versions will be on sale, starting tomorrow in South and western Europe, while central and eastern Europe will wait until the end of September. The model with 4GB of RAM and 32GB of storage will go for €399, while the one with the same RAM amount and 64GB of internal space will be priced at €449. 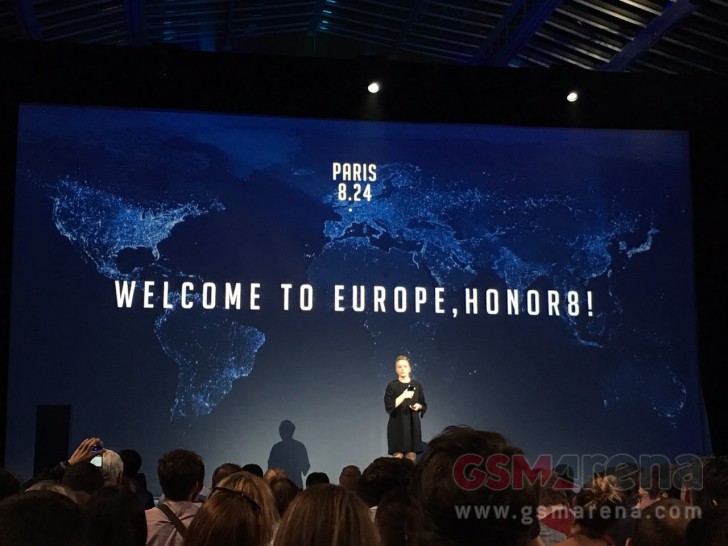 Both prices include VAT of course and are actually identical to the levels prepared for the US, except the currency is obviously different (and that's something we've gotten used to in the mobile world). In the UK, the handset starts at £369.90. You can already pre-order it throughout Europe from Huawei's online store. The Honor 8 is going to be out in the Middle East and Russia tomorrow, on the other hand.

The phone comes with a 5.2-inch 1080p touchscreen, Huawei's Kirin 950 chipset (with an octa-core CPU clocked at up to 2.3 GHz), dual 12 MP rear cameras with laser autofocus and dual-LED flash, an 8 MP selfie snapper with a LED flash of its own, a fingerprint scanner, and a 3,000 mAh battery. It runs Android 6.0.1 Marshmallow with EMUI 4.1 on top.

This Huawei Honor 8 is probably the most beautiful smartphone at the actual market.

I prefer my notebook over a tablet. Sorry.

What? Probably only you don't.. Go n study that best mobile..