"Foldable" is clearly the buzz -word of 2019. Well, that and 5G - a rather confusing situation that has been causing some evident confusion among manufacturers. Huawei clearly decided on a Pokemnon, "Gotta Catch 'EM All" approach to the situation with the Mate X - a truly head-turning device that both rocks a foldable display and what Huawei claims is the faster 5G connectivity around. 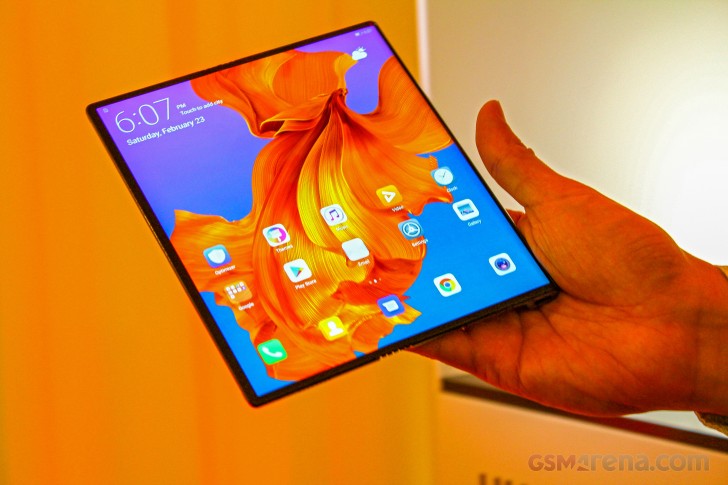 Having said that, "rocks" is kind of a misleading way to put things, since the Mate X is far from a finished device ready for end-user markets. In fact, it falls squarely in the prototype category for quite a few reasons. Not only did it stop by and MWC with pretty much no hardware details, but it was also showcased vary sparingly, mostly from a distance and often even in a glass box.

This seems to be a common theme when it comes to this initial batch of foldable display handsets. The Samsung Galaxy Fold got very limited exposure. Clearly the tech just isn't ready for prime time quite yet - a slightly annoying fact we've just had to deal with at MWC 2019. 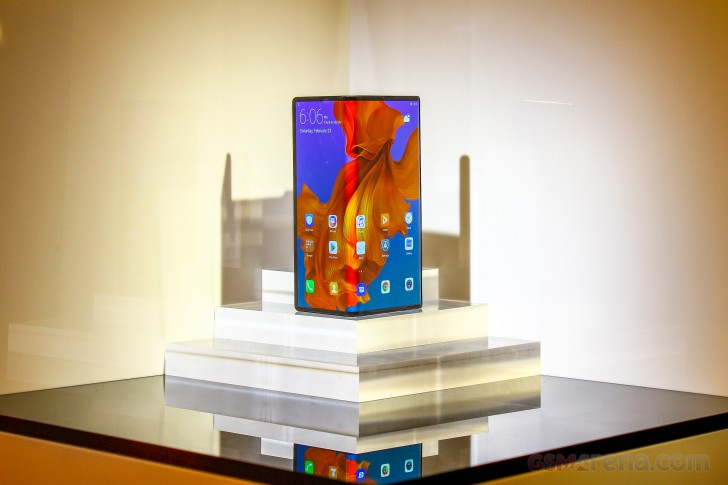 Having said all thins, it should come as no surprise that the Mate X, in its current form, fas mostly teases from a design standpoint, lacking almost any particulars about hardware. Still, a first look is better than nothing, so read on for a more in-depth look into what could very well be the near mobile future.

We still have a very limited pool of foldable display devices to use as reference points from a design standpoint. The Samsung Galaxy Fold and a few scattered concept devices are hardly anything to go by. Especially seeing how getting some actual hands-on time with any of them is nearly impossible at this stage.

That being said, we feel confident enough in saying that Huawei's first approach to the foldable trend is radically different from Samsung's. If nothing else, Huawei has its panel on the outside surface of the device. 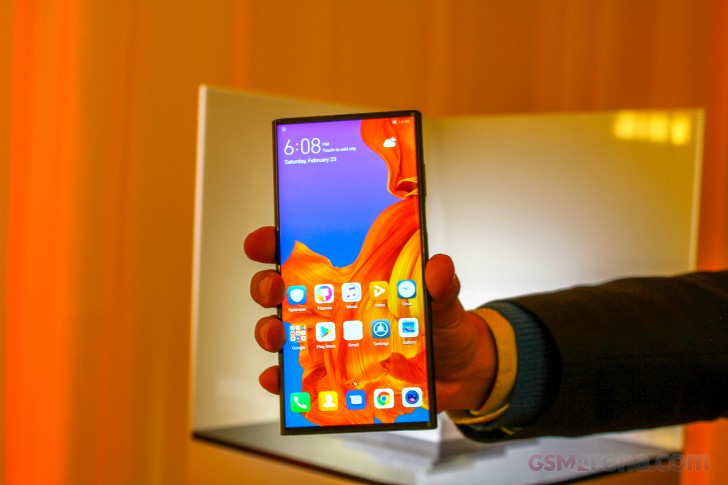 Whether or not that's a better approach overall still remain to be seen in the long run, but there are some particular details that already stand out. First off, a panel on the outside is clearly more exposed. With this particular design, there will probably be no way of handling the Mate X without you or some potentially harder surface being in contact with a portion of the screen. 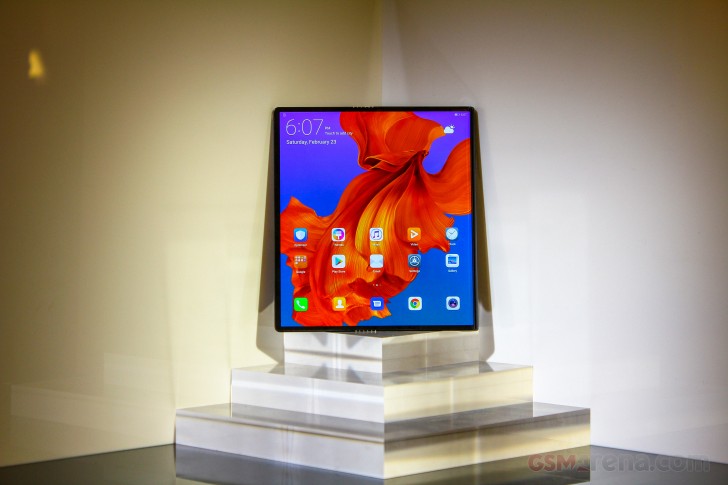 No big deal right? Just let Gorilla Glass or whatever flexible alternative there is handle that. Well, there is still little info or any actual practical real-world experience to go by when in comes to the durability of this new breed of foldable displays. From our brief contact with a few our initial impressions are that the surface lack most of that hard glass feeling we have grown used to with Corning's Gorilla Glass offerings. Instead It feels a bit more "silky", if that makes any sense. We are hesitant to outright call it plastic, though. But even so, the feeling it gives off is not instantly confidence-inducing.

We'll just leave it at that for now, but it is worth noting that Huawei will be offering what it calls a "Full cover case" for the Mate X. Whatever one might look like. 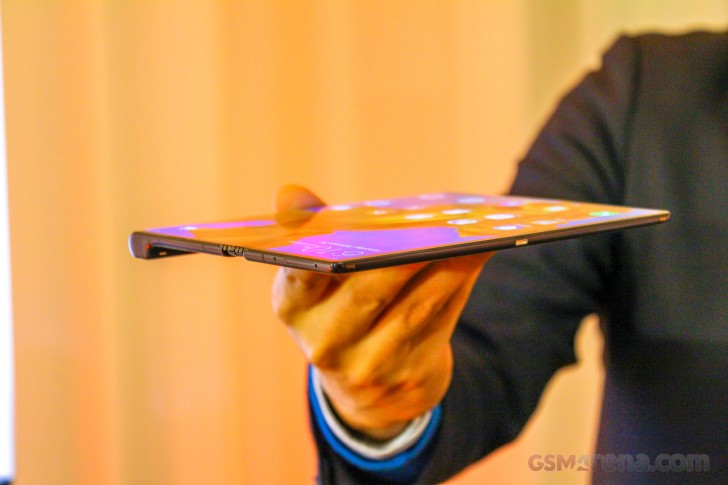 Before we move on to the rest of the Mate X's body and construction we do have another note to make about its display and particularly the way it looks in person. Even since we laid eyes on the first foldable OLED concepts we have been wondering about visual fidelity, panel quality and especially distortion. From what we saw of the Samsung Galaxy Fold on stage, there was definitely a noticeable seam on its display, even when fully unfolded. 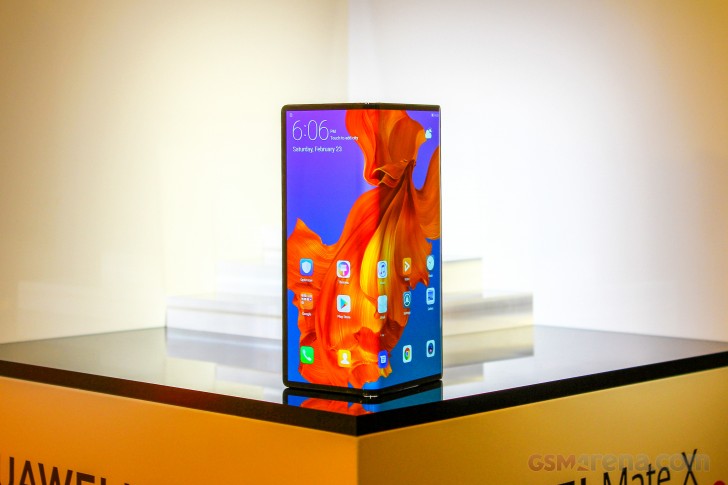 Now, this might be an early prototype unit issue. We sure hope so. But even so, when fully unfolded the Mate X looks almost perfectly flat and nearly distortion-free. Unfortunately, without more extensive access to either device that's as far as we can take this preliminary comparison. 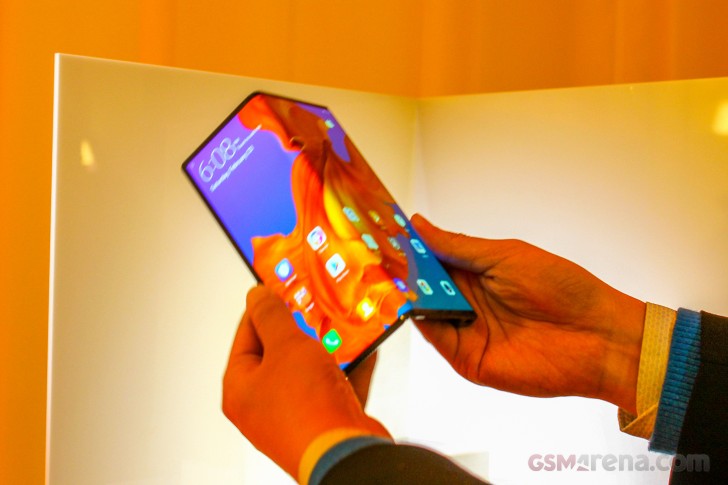 Introduce any angle of fold and distortions become the main thing that gets displayed on the seam of the Mate X. Hardly surprising. Huawei is clearly aware of this, since the are of the screen right above the fold gets disabled when the Mate X is closed up. Folding phones naturally present challenges beyond the display itself. Purely mechanical ones at that - something the mobile industry had mostly left in the past during the "slab" design era of smartphone. Well, the hinge found its way back on to blueprints and its going to be a very important part of this new breed of devices. Huawei calls its design falcon wing.

It has five joints which deliver pretty fluent motion. There seems to be some built-in lock in the fully open state and although the joint never really appears straight, the display seems to lay almost perfectly flat. Like we already mentioned. When fully folded, the Mate X is held in its compact state by a few small pins on the inside of a groove on what we would call the back of the device?

It's all rather relative, of course, but the Mate X does have a slightly thicker segment on one end, which houses the camera setup and a type-C port. Probably more less apparent hardware as well. Said segment measures 11mm and exactly represents the total or maximum thickness of the Mate X. Unfolded, the displays are just around 5.4mm thick. 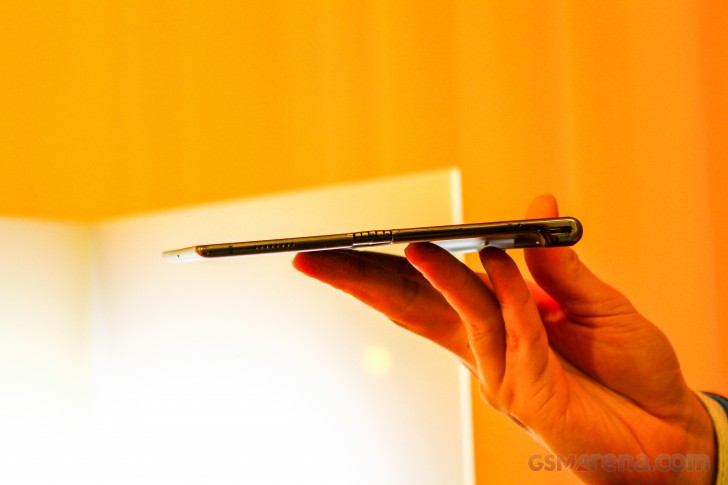 There might just be a power button, plus fingerprint reader combo somewhere on that segment of the phone as well, since Huawei did mention it as one of the few Mate X specs details it shared. The side of the phone appears to have a volume rocker and a fingerprint reader underneath. There is clearly a button beneath the camera arrangement as well, though in an admittedly odd location. Join us on the next page for a run-down of the other hardware details we know about the Mate X.

Hi How are you I am fine . I was also finding such a phone.its look very nice .but l need long battery timing.

Huawei is clearly telling us that, phone is manufactured during the week days and go on sale on Friday :) What I'm curiously about is why not sale it on their showrooms around China! I think we should make a fair comparison between brands. ...