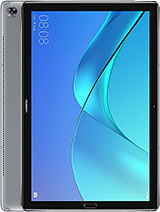 I do hope the 2016 MediaPad M6 10 will Finally have an OLED screen, its much better on my eyes than LCD.

Anonymous, 29 Nov 2018Hey s4f786, NPU or no NPU, the down speed move is simply a ... moreI do agree with you tbf, manufacturers will do this, Intel do it, Nvidia do it too, the practice is nothing new but too those are in saturated markets, whereas when it comes to android tablets it's been on a decline, overall for the future of android tablets it doesn't help. Saying all that I'm very happy with the 960s version, runs very smooth and same as you I don't game on it and mainly use it watch media.

To be fair, I'm telling you that all M5 tablets come with a Type-C to 3.5mm earphone socket adapter. But again, the eliminating the 3.5mm earphone socket is another lousy marketing move to nag the users to the Bluetooth earphones. It doesn't affect me too much. Lucky me! Normally I don't use any earphone.
Now I'll sing a little praise. I have the M5 10.8" non-pro version. The battery life is excellent. All tasks are fluid. For what it's worth, I use less than 20% of the storage space. The screen is just fine, but in a bright, sunny place, I'll have to turn the brightness to above 95% to be able to read the articles on the screen. At normal circumstance, I use only 45% of the brightness.

Hey s4f786, NPU or no NPU, the down speed move is simply a strategy to differentiate their products. It doesn't affect me too much, because I don't play games. So the Kirin 960-S is just fine for my uses. Besides, even the full speed Kirin 960 isn't great for games to begin with, and it was from 2016. Since you mentioned Kirin 960, guess why the factory didn't put a Kirin 970 in any M5 tablet? It's another marketing move. Too many such marketing moves that is slowing killing off the Android tablets.

So just got the non pro version on a black Friday deal for 258 pounds and boy is it an upgrade over my ageing Sony z2 tablet, love the screen, love that it has a bezel which isn't too massive but not too small, great for watching media without your hands getting in the way if you don't have a case for it yet. The sound on this thing is phenomenal, for a tablet it's super loud and provides a great amount of bass. The only thing I don't like is that there's no earphone jack, so something il have to get used to. Now for people wondering what's the difference between the pro and non pro, non pro version you can't use the stylus and also the cpu, the cpu in the pro version is the kirin 960 whereas the non pro is the 960s, what's the difference you may ask, well not much really, the 960s is just underclocked by 300mhz, but ads an npu from the 970 which the 960 doesn't have.

This tablet has kirin 960 or 960s.and what is the diference betwen the two? Thanks

Mero, 26 Sep 2018Thanks Updates are not important for me but what realy I n... more"For study & office, Maybe gaming" "need a competent tablet with good life span"
- I read PDF files on this tablet. It's excellent for this task. I don't have MS Office on it, but I can write notes.
- I've been using this tablet for the past month and a half. I'll say it is a competent machine for anything I throw at it. I don't play games on it. I mainly use the tablet for reading: files and webpages. Also, screen mirroring. So I can watch content on big screen TV. It does this well.
- The battery life is good. The charging is fast. I usually charge the battery when it's 70% and stop when it's 95%. It take 30 minutes max.
- Huawei's build quality is very good. I expect this tablet to last a good number of years without any problem. In the long run, the tablet is as good as its battery. And, you will want the software updates. Because without it, the tablet will become vulnerable, and you won't be able to run the new apps.

can use this mediapad for making phone calls

guys need help... how do you move apps to the storage card?

What is the difference betweem Pro e Standard versione of this M5? Only the stylul pens and the CPU?

why do they keep making only GSM tablets. they should make only Wi-Fi versions for those that dont need sim card in tablet. this will reduce price

Anonymous, 26 Sep 2018Huawei M5 is the cheapest of the three tablets. It is Andro... moreThanks
Updates are not important for me but what realy I need is a tablet for studying&office purposes & may be used for gaming.
Also I need a competent tablet with good life span.

Mero, 25 Sep 2018I have note 8 & I am regular android user,now I want to... moreHuawei M5 is the cheapest of the three tablets. It is Android. The downside is it won't receive software updates. Huawei M3 for example, it's from 2017 and stuck with Android 7 Nougat. It's only from last year, and Huawei is still selling it, but won't update it to Android 8 Oreo.
This Huawei M5 you're looking at is on Android 8 Oreo. It won't receive update either. And, it doesn't have Widevine L1 certificate for legal HD streaming.
If you're OK with these flaws, then buy the M5. Or else, buy the Ipad 2018. The Samsung will be expensive and it will only receive 2 times updates and no more.
In contrast, my Ipad Air from late 2013 is still receiving software updates. It got iOS 12 updates a week ago. That is for a 5 years old tablet. I have to give credit to Apple Inc. My Ipad Air still works great.

I have note 8 & I am regular android user,now I want to buy a tablet,I am confused which to buy: Ipad 2018 or Huawei mediapad M5 or wait for Samsung tab S4.
Kindly if anyone can help me in the decision concerning performance,expected life span.
Thanks

SML, 26 Feb 2018MediaPad but no headphone jack? Ohhhh amazing Thinking skil... moreProbably the reason this model of a Huawei tablet doesn't have an FM Radio Chip in it: No possible antenna for reception.

Anonymous, 21 Aug 2018Does Huawei M5 pro tablet supports OTG? I am trying to c... moreYes, M5 all versions support the OTG. However, the file transfer speed is only the USB 2.0 standard.

I don't think you should pick this up if you intend to play shooting games (TPS/FPS), as there is problems with their touchscreen firmware (as usual from Huawei) that messes up your aim if you were to make minor adjustments. You can search XDA to find more information about it.

Its too heavy, check out samsung if you want lighter