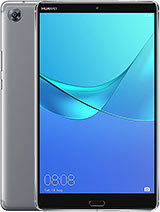 muneer, 06 Dec 2018Can I use this device for calling like any other mobile ? ... moreYes like on any other phone

Can I use this device for calling like any other mobile ?
I mean to put it near my ear not using a headphone.
Is it really has only speaker if any calls happen ?

veegee, 27 Nov 2018HI, Anybody got an updaate to Mediapad M5 8 ? I am still w... moreIt receives security patches about every 2 months, but no Android 9 Pie update. Not at this writing.

HI, Anybody got an updaate to Mediapad M5 8 ? I am still waiting for. Seems no update available since introduction ?

i have it, in performance it can keep pace with my samsung note 8

Nick0, 15 Oct 2018Why are people so stupid, the only reason there is no headp... moreIn which case, the phablet should have two USB-C jacks: one at the bottom for charging and one at the top for listening, although I don't suppose that anyone will be listening and charging simultaneously. That will make it so that it doesn't seem like something is being omitted, yet you are being charged the same price.

Use it in combination with a Bluetooth headphone to make your video and calling experiences so much more pleasurable and hands free.

Dimming should be fixed. I'm still waiting for some kind of update.

Why are people so stupid, the only reason there is no headphone jack is to make the device thinner and more modern.It comes with a usb-c adaptor so people stop winging about old school and get modern.
By 2020 all decent devices will be sold with phono socket.

Urbanra5cal, 25 Jun 2018Got mine thru Lazada How is the performance compared to iPad?

Is this available at SM North Annex?

Berri, 03 Sep 2018Yes, my bad. I think I meant to say no headphone jack. Wh... moreYes, it has OTG function and flash drive data can be read and played in the Mediapad

Berri, 06 Jul 2018stop such jibberish. There are 2 cameras. And I went to y... moreYes, my bad. I think I meant to say no headphone jack. Which I think is less and less a concern as you can simply use an adapter they supply. This thing also has bands LTE 4 which is what you need for T-mobile in USA.

I'm seriously thinking of getting this.

Can I make phone calls with this in the US on AT&T ?

In case anyone's interested, GPU on this set is Mali-G71 MP8.

wlxgrf, 17 Aug 2018my friend bought the M5 8 and there is NO flash.Yes there is no flash, kind of weird to a have a decent camera but no flash so you'd just have to rely on natural lighting, but for me I don't really use the camera so it's not an issue.

Quite possibly the most weirdest and irrational decision ever made by a company.

Quite possibly the most weirdest and irrational decision ever made by a company.