Today Huawei had a massive event where the Mediapad Pro tablet was unveiled. During the keynote, Richard Yu, CEO at Huawei, revealed the company has managed to sell over 7 million phones of the Mate 30 family, which is a massive 75% increase compared to the Mate 20. 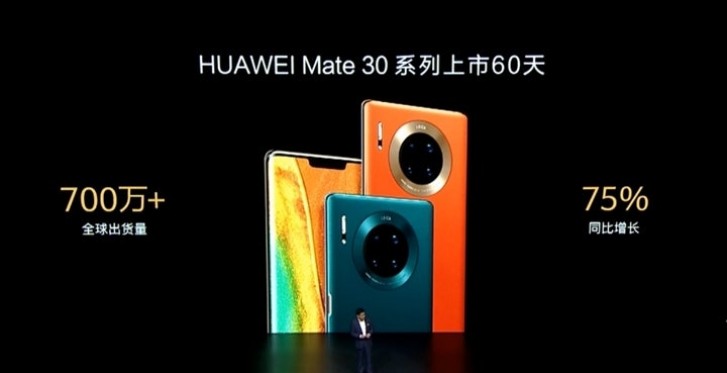 Huawei is still offering the Mate 30 series predominantly in China, although they can be found at other Asia Pacific markets. Nevertheless, the 7-million milestone in the first two months is surely an accomplishment, given the situation the company has fallen into.

There are two key reasons why the Mate 30 phones are so successful - it is an overall amazing phone, as we established in our review back at the beginning of October, and a lot of people in China are switching to Huawei devices, pushed by a sense of pride and patriotism.

Combined with the multitude of price tags, depending on the variety of memory storage and Pro features, there is a Mate 30 flagship for every taste. Currently, no one knows whether Huawei will be allowed to trade with Google, so only time will tell whether the Mate 30 lineup will be successful (or available at all) across markets like Europe or India.

the difference between those OLEDs and Huawei's is barely intangible. In fact saying that the IPhone has a better OLED is arguably a lie but this is subjective anyway.Huawei has guaranteed that their phone will receive security updates, just not from...

It is a basic phone with great canera. Lol