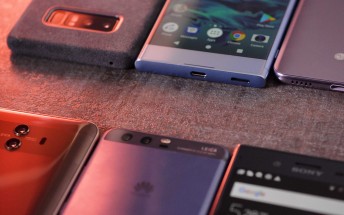 The International Data Corporation (IDC) published its report on the smartphone market in Q1. The data revealed that a slowdown in China dragged down the whole market to a decline of 2.9% on a yearly basis. The home country of Huawei, Xiaomi and Oppo, respectively 3rd, 4th, and 5th, shipped less than 100 million phones, which hasn’t happened since 2013. Samsung and Apple kept the top positions with minor changes in volumes.

In Q1 2018 Samsung shipped 2 million devices fewer, while Apple increased its numbers by 1.4 million. Huawei managed to ship nearly 5 million phones more and now accounts for 11.8% of the market. Xiaomi is the biggest winner with 87.8% Year-on-Year increase, while Oppo goes down in 5th after unimpressive performance.

All other manufacturers shipped 112.7 million phones which is 33.7% of the total amount, meaning two out of three new devices are manufactured by a Top 5 company. For comparison, last year the "Other" markers had a combined market share of just over 40%. 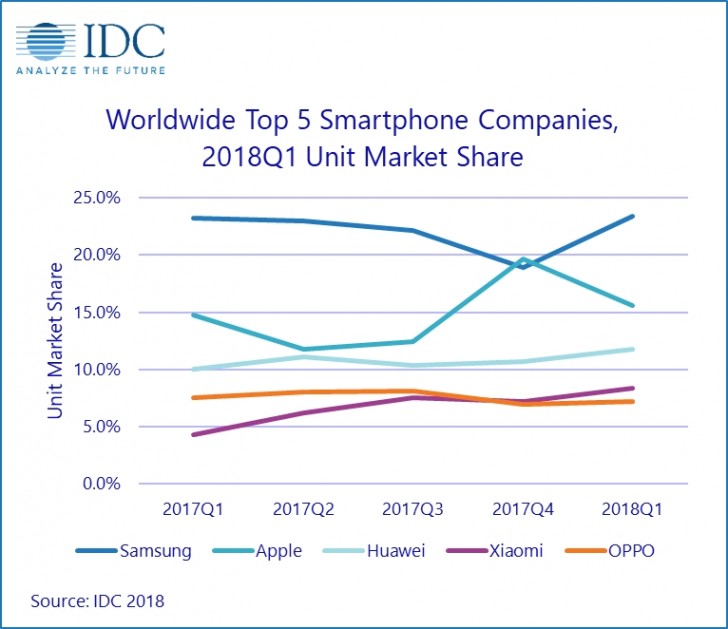 IDC reflected on each of the leading companies and what was the main driving force during the past quarter. Samsung remained a leader due to the earlier launch of Galaxy S9 and Galaxy S9+, compared with their predecessors, the Galaxy S8 duo. The biggest driving force for the massive volume are the A and J series, targeted both at developed and emerging markets.

Apple had the iPhone X as the most popular model each week in the first three months, bringing a higher average retail price. Huawei reinforced its third place with the affordable phones and the continuing expansion in Western Europe. The Shenzhen company is still trying to catch up with Apple, but this might be a harder task to accomplish now that it was denied proper access to the US market.

Xiaomi is the big winner in the overall picture due to its massive online expansion in India and Southeast Asia, as well as arriving on key European markets like Italy and Spain. In an attempt to compete, Oppo launched an online-oriented brand called Realme, with the first device expected in two weeks.

I'm okay with that, life was simpler and better before all these unnecessary distractions.

He's not a serious photographer the dude just said he likes taking good low light photos in the club, do you know how creepy it would be if he busted out a camera in a club lol crappy phones can't take good pics no matter what you do.