After posting its Q3 global smartphone report last week, IDC went ahead and released the India specific report for the July-September period.

As a whole, the market saw 46.6 million smartphone shipments which is well up from the 42.6 million seen in the prior year. All top-five brands (apart from Samsung ) saw a year on year increase in shipments for the period.

The numbers show that Xiaomi had the highest shipment volume with 12.6 million units and also posted an 8.5% yearly growth. Going by shipment volumes, Samsung came in second with 8.8 million units which is down from the prior year when it managed 9.6 million during the same period. Next in line is vivo which put up 7.1 million smartphone sales during the period alongside an impressive 58.7% yearly growth. 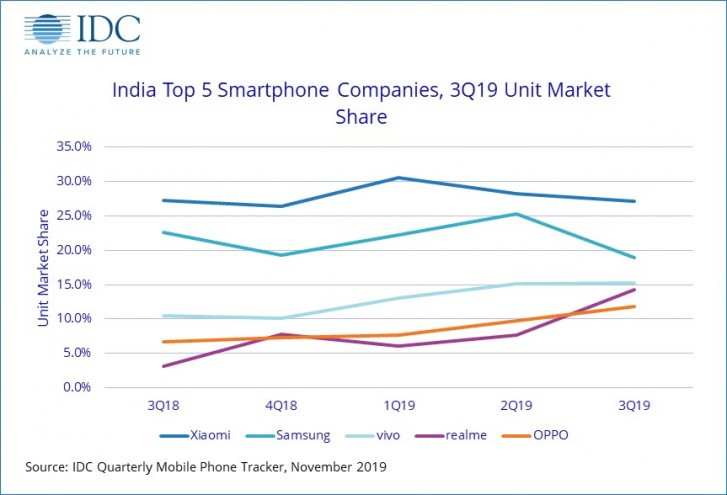 Most impressive however is Realme’s yearly growth figure which comes at an absurd 401.3%. The Oppo spin-off managed 7.1 million shipments during Q3 2019 compared to just 1.3 million last year. According to IDC, realme’s success came on the back of the affordable C2, 3 and 5 series phones. Oppo itself managed 5.5 million shipments and a solid 92.3% year on year growth.

IDC: Smartphone market grew marginally in Q3, Samsung had the most shipments

Realme sold 5.2 million smartphones in India in a month

You are telling the real truth. Indian market is the most price sensitive market and the consumer demands Smartphone less that $400. Same goes for Nepal my home country