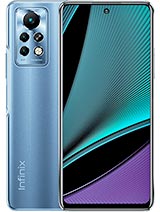 Anonymous, 17 Oct 2021i have been using ips lcd for long. i have no complain at ... moreAmoled is vastly overrated. It's just people trying to show off or trying to justify their massively overpriced phone that talk up amoled. I have owned and used both types. I love huge screens on phones. I would go for a 7" LCD over a 6.5" amoled anytime. The difference in price doesn't equate to the difference in quality. I have a poco f3 with a Samsung E4 amoled panel. Hate the thing. I am using the infinix zero 8i with a quality 6.95" LCD and I love it. The poco f3 was over 300 euros. The infinix was 145 euros. Great value.

Chishimba , 20 Oct 2021When are these guys making an AMOLED display. Everything el... moreAre you not aware that their primary target markets are emerging markets in Africa and Asia? One of their biggest markets is Nigeria. They're trying to keep the price down. I have a poco F3 with a Samsung E4 amoled and an infinix Zero 8i with a 6.85" LCD. Yes, the amoled is better but it's not really that much better. You're going on as if it's like the difference between a CRT TV screen and an oled TV screen and it's not. They can't make phones with amoled screens and a 6.95" panel for under 250 euros. It's not going to happen. They're not apple or Samsung and don't have limitless funds and resources. They're cleverly targeting a market that is largely untapped. If they decide to go with amoled, most amoled manufacturers don't make 6.95" panels for a start so they're going to have to reduce the size and enter into expensive contracts with suppliers and they'll have to put up the cost and will not sell as much. That's how to end up destroying your business.

This is not a big phone. Is still way smaller than the mi max 3. I wouldn't recommend it as is not too far in size from the galaxy a72

Chishimba , 20 Oct 2021When are these guys making an AMOLED display. Everything el... moreit does.
check them infinix zero X & pro

5000mAh of battery doesn't really matter if your chipset is of a 12nm process. It ain't efficient. I "may" understand the display but seeing as the phone that this thing is always compared against is the other Note __ Pro Series from Xiaomi, good luck.

ishak7726, 19 Oct 2021I'm surprised Infinix puts a camera that doesn't ... moreyou are correct bro.. this phone should not have downgraded in that area. sadly, one of the features to enjoy on the big display is left out

When are these guys making an AMOLED display. Everything else is good but the IPS brings it all down. It wouldn't hurt to pay a little more for the display. The resolution is on point.

Anonymous, 18 Oct 2021making your phones too big for anyone to hold isnt a sellin... moreAre you speaking for your self or for everyone

Unknown, 19 Oct 2021What exactly is the point of releasing a new version...if t... moreI do not believe this specifications

What exactly is the point of releasing a new version...if the specs are lower or the same as the older version.....

Is it just distraction....or they got nothing else to do...or what exactly....

Donbenie, 18 Oct 2021It clearly states that there are 4G bands available.. Wh... moreI know it's 4G compatible I'm talking about comparability with all the frequencies, some phones are some aren't depending of the gsm provider and country....Try to read and understand people's queries before typing such replies.

Some people do like big devices.
To me this size is just perfect. Thumbs up infinix

Anonymous, 18 Oct 2021making your phones too big for anyone to hold isnt a sellin... moreI, for one, like these big phones. And since I'm not that special there are many many others who do as well.

making your phones too big for anyone to hold isnt a selling point. its a massive inconvenience

Anonymous, 17 Oct 2021i have been using ips lcd for long. i have no complain at ... moreused to have a phone with lcd now a super amoled one, the difference is huge, the lcd isn't bright enough in outdoors, if you live in a place that's sunny most of the year. thats the only reason i bought one, i don't watch shit on my phone, i much prefer my laptop any day of the week.

[deleted post]I am very sure that there are phones within its price range that are rocking AMOLEDs..

Rbx , 17 Oct 2021So Infinix & Tecno phones are not compatible with all L... moreIt clearly states that there are 4G bands available..

What are you on about?