Infinix is a brand we don't review too often, mostly due to its regionally limited popularity. In certain markets, particularly in Africa and South Asia, however, Infinix has its fair share of market pull. To provide additional context, Infinix is one of the Chinese Transsion Holding brands, with the other major ones including Tecno and Itel. Also, Oraimo for accessories and Carlcare for after-sales service. But, we digress.

Actually, we've been on a bit of a roll with Infinix latterly, since we just recently checked out the new Infinix Note 11 Pro.

And now we have the Infinix Zero X Pro in for review. It is the current flagship in the Infinix lineup and, as such, is quite well equipped in terms of hardware. Pricing is a bit difficult to precisely pinpoint since the Infinix Zero X Pro is still not on sale in most online stores we checked. Some sourced we've seen hint at an MSRP of around $300, which seems pretty low. Another more believable alleged price tag is right around $456 or EUR 390 for the 256GB/8GB variant. It is hence fairly safe to assume that the base 128GB/8GB variant should retail at around $400.

That sounds impressive, given the kind of specs the Zero X Pro is rocking. The triple main camera setup is a major highlight. It has a 108MP, f/1.79 OIS-enabled camera at the helm, along with an 8MP, f/2.25, 120-degree ultrawide and last, but definitely not least, an 8MP periscope telephoto, with 5x optical and up to 60x digital zoom and OIS. All three cameras actually have autofocus, which allows the ultrawide to double as a macro cam. Infinix is so hyped about its zoom tech that there is even a special system for photographing the moon on the Zero X Pro, dubbed Galileo Engine.

And the camera is far from the only impressive part of the specs sheet. In no particular order, the Zero X Pro also has a large 6.67-inch AMOLED display, with 700 nits of advertised brightness and 120Hz refresh rate, with a dedicated display controller Infinix seem particularly keen on in marketing. You also get a 4,500 mAh battery with 45W fast charging.

The Zero X Pro is definitely a bit of a departure from the typical Infinix budget MO. It even has the looks to go along with the beefed-up specs sheet, actually incorporating a glass back in its design. We can't wait to dive in and see how well these specs on paper translates to the real world.

First, though, a quick unboxing session. The Zero X Pro comes in a solid cardboard box, just like all other Infinix models we've seen. Unlike the Note 10 Pro and Note 11 Pro, however, it does not rock a flashy bright green color. Infinix went for subdued colors and some subtle patterns instead. There is plenty of cardboard on the inside of the box as well to keep everything nice and secure. 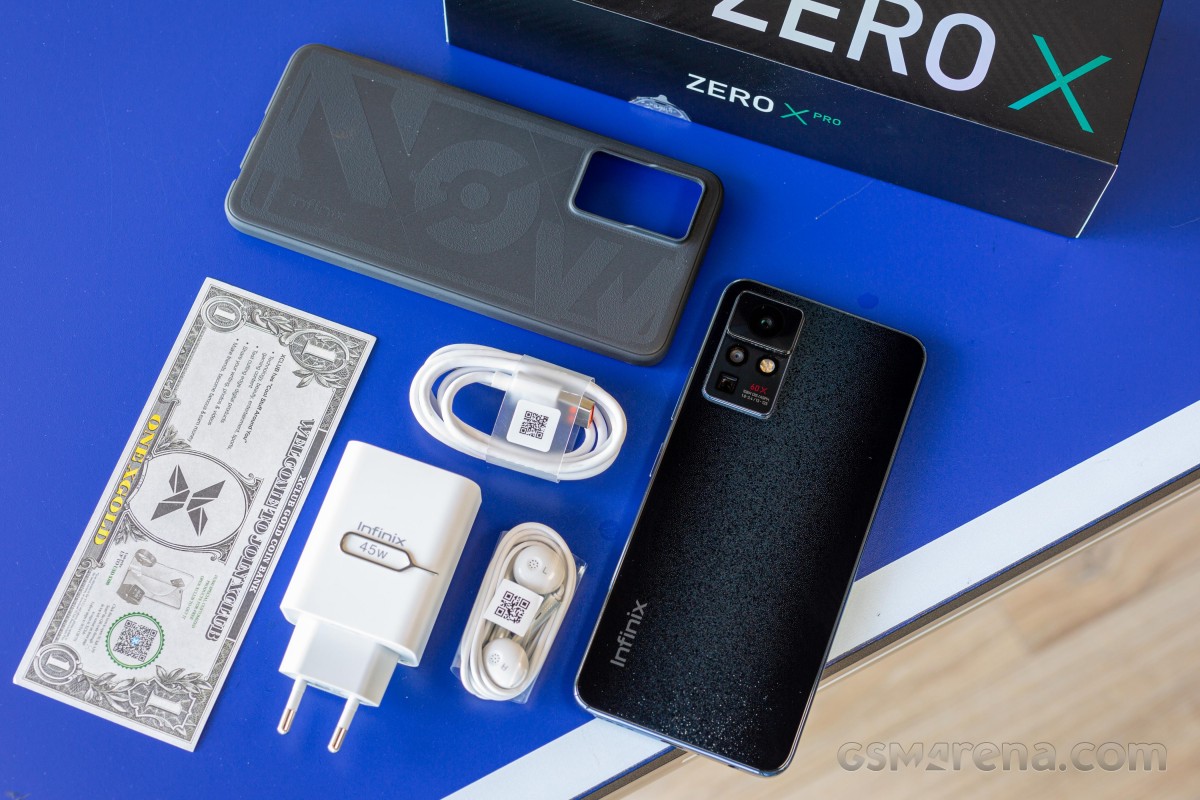 Infinix did not skimp on the accessory package. First and foremost, you get the 45W charger, along with a USB Type-A to Type-C cable. You probably want to hold on to it as well, since we assume that it is rated for more current than your typical cable to accommodate the way Infinix has its 45W charging set up. Beyond that, you also get a nice textured and grippy case. It even has a nifty lip to protect the camera island. No complaints there. Last but not least, Infinix has thrown in a pair of wired earbuds with an inline microphone. Nothing particularly flashy, but still great added value overall.

Realme 6 Pro has better 64mp samsung sensor with mpre clarirt and vibrant photos plus 60fps@1080 recording. The telephoto on 6 pro take impressi s 10x zoom photos even in night (low light). Unfortunately my R6 Pro was snatched on a gun point. So i wo...

Unfortunatelly not, it was a typo. Zero X Pro can only do 4k/30fps videos.