After a week of pre-orders the new iPhone 11 trio and the new Watch Series 5 are available for purchase in the first wave of countries. Sales begin at 8am local time and with how time zones work, fans in Japan, Australia, Singapore and other countries have already bought theirs.

Here’s a refresher on the pricing of the new phones. The iPhone 11 got a price cut from last year’s XR, but it may be the third camera on the iPhone 11 Pro and iPhone 11 Pro Max that might prove more enticing (info from pre-orders points to just that happening).

Sales of the new Apple Watch Series 5 have kicked off as well (available in Aluminum and the more premium Edition version).

Here are photos from an Apple Store in Tokyo:

An Apple store in Tokyo, Japan during the early hours of the iPhone 11 launch

We also snapped some photos ourselves - here are people in Barcelona and Munich, gathered up to check out the new iPhones and Watch. 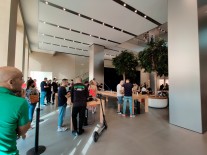 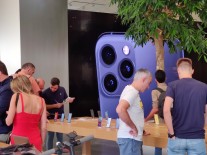 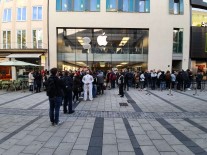 Note that iOS 13 is rolling out for those of you holding on to your old iPhones for now (but you may want to wait for v13.1 as many are reporting bugs with this version). The new models come with v13 out of the box, of course. The new version of watchOS also started rolling out yesterday. As for the new iPad 10.2, that one will come in 10 days.

PS. If you buy a new iPhone or iPad, you’ll get a free year of Apple TV+, which launches on November 1. Apple Arcade is already live.

Thats wrong info, the hacks were done with stolen personal info and passwords, as was early pointed out by security experts who questioned the hackers claims at an early point. In any case this happened in 2014, and has not been repeated, Apple didnt...

As an adroid guy for my whole life I will switch and get the 11 Pro. I wanted a Samsung device but since the new Exynos CPUs are lagging behind SD I will not pay for that. So I will get an iPhone - best CPU/GPU and long SW support.

Google never innovated anything, except google search. And that's 5417 nowadays as its search results are biased, filtered, and irrelevant. That's why many people have started moving away from google's services to duckduckgo, bing, outlook mail, bi...