Tenth generation versus the first of its kind - the iPhone 7 versus the Google Pixel, in their Plus-size versions (or XL in Google terms).

There have been phones by Google, you may argue, but no Nexus has been the epitome of what an Android smartphone should be quite the same way that the Pixel is. Even though that's exactly what we were told for years. Well, now we know that Nexuses were for devs and geeks, and Pixels are for users. 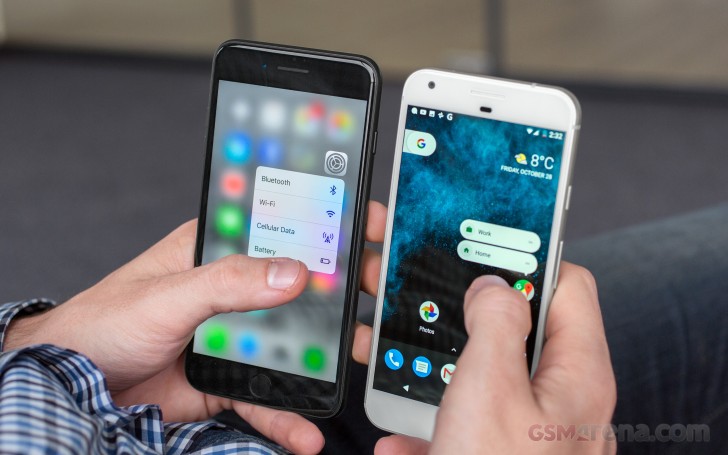 But going for the ultimate user experience is not the only way in which the Pixel resembles the iPhone, not at all. Google's latest has the iPhone 7 so well centered in its crosshairs that it matches its pricing to the dollar across sizes, storage options and markets. A premium price for a premium device - that's the message.

With that premise, figuring out which one gives you a better value for your hard-earned cash (not an insignificant amount of it, too), comes down simply to which is the better phone. Looking at the specsheets alone, a few key differences emerge.

Apple iPhone 7 Plus at a glance

Google Pixel XL at a glance

A few key differences are immediately notable, so let's start with those.

This won't be your usual battle of flagships here. We won't be dissecting the two smartphones chapter by chapter like we've done in the past. Instead we'll focus on the key stuff - display, battery, and camera. And since Google Assistant is among the Pixel's major selling points, we'll touch on how it fares against Siri. But not before we share some thoughts on the controversial topics of design and appeal.

Then get one from apple or Google

Pixel xl are ugly.. But i still buy it (used actually).. Its camera hard to beat for midship class.. Even par on cheap flagship class.. But my main concern are old chipset.. Hot like can boiled egg..

Please can someone help me get one