Samsung’s Galaxy A-series is proving to be quite the hit reaching 5 million sales in India alone and the company is keen to take good care of its phones. Last month the Galaxy A50 got its first OTA update with some camera and fingerprint improvements alongside the April security patch. Now a new A505FDDU1ASE2 update is promising more camera and Wi-Fi refinements as well as the latest May security patch. 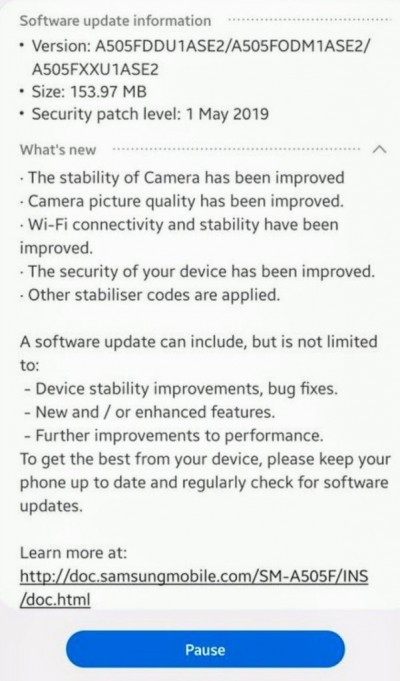 The update is live in India and comes in at 154 MB. The main focus is on improving the overall stability of the phones so don’t expect any major changes. .

The Galaxy A50, in particular, is shaping up to be the most well-rounded device from the bunch offering a large Super AMOLED display, triple camera setup and large 4,000 mah battery in a $315 package. If you want to learn more about the A50, check out our full written review or click below for the video rundown.

Samsung Galaxy A50 update adds a couple of new features

Samsung Galaxy A70 now on sale in India

Did the battery life worsen tho?

Even for 240 bucks i can find tons of better devices which are faster have better CPU GPU more ram and disk space etc.