We are now less than one month away from the official announcement of the LG G6 at MWC in Barcelona. And as we get closer to the February 26 event, more and more leaks about the G6 are starting to pop up. Today a few images have been outed showing what looks to be a G6 prototype of some sort. Its back, however, is in a less than finished state, as you can see.

So this is obviously not going to be what the G6's back ends up looking like, in terms of material choices. The phone should have a metal unibody construction, and what's portrayed here has a different back shell used for testing. However, the placement of the dual rear camera and fingerprint sensor looks accurate based on what we've seen from leaked renders before. 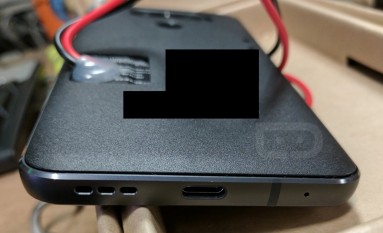 The USB Type-C port on the bottom of the device is flanked by a mono speaker and a microphone hole, while on the front the display takes up almost all of the space as has been rumored countless times. It's impossible to tell if the panel has rounded corners as some mumblings have stated. The minimal bezels are there to stare at, on the other hand.

I did and it was indeed straight 90 degree corners. I guess we looked at different images.

Hmm, the lower bezels are thicker than the top ones. So that's why they were hiding it.

honestly looks just like every other phone out there. what's the point? oh dual camera...oh faster processor oh no home button... oh boring