The G8X ThinQ is easily recognizeable as an LG handset - in fact, it looks just like the G8 and V50 before it. Most phones in recent times have dual-glass construction and the G8X is no different, featuring Gorilla Glass 6 panels on both the display side and the back. 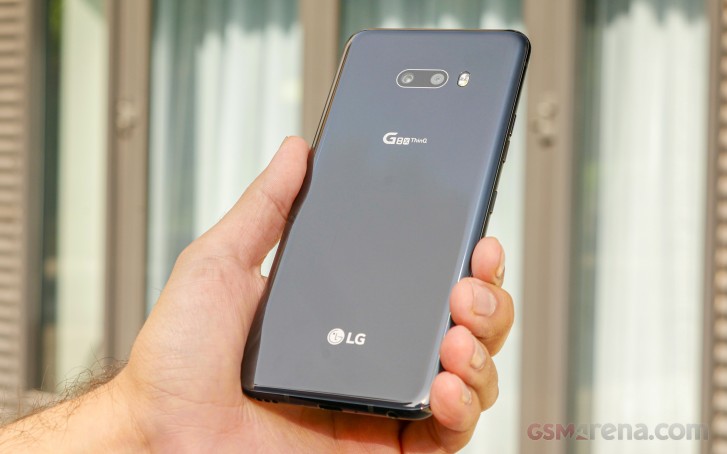 As some previous models from the company, the G8X has undergone testing according to the MIL-STD-810G military standard. It's passed the tests in 14 categories for drops, temperature, humidity, dust and whatnot. That's on top of the fairly ubiquitous IP68 rating that pretty much any other flagship has as well. 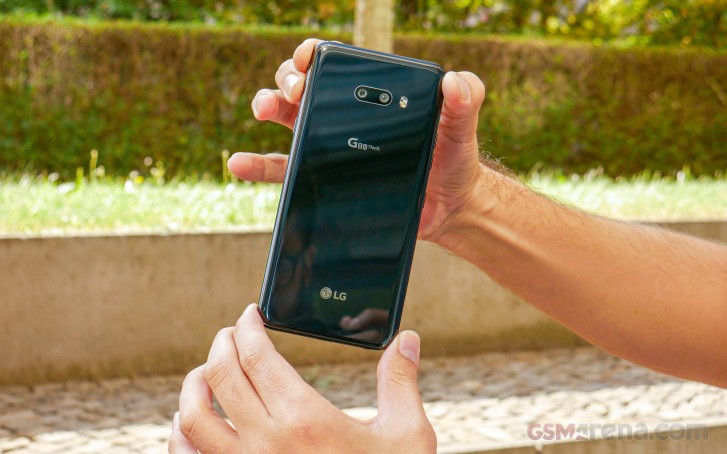 Another area where the latest LGs have started to differ from the pack is in the fact that their cameras sit flush with the surface of the backs - so no camera bump on the G8X. And it's not like there aren't cameras in there - a rather common regular + ultra wide duo is in what you'll find on this LG. There's no telephoto, however, and that's where the G8X is looking underequipped next to the competitors. 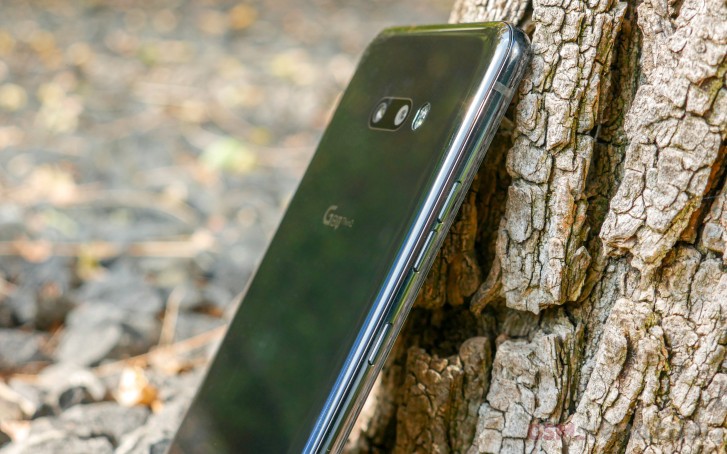 Still, LG is going back to its roots by fitting a crazy wide camera - the specified 136-degree field of view is the same(-ish) as what was available on the G5 before they started prioritizing distortion correction over coverage. Seeing as how this is a very early pre-production unit, taking samples was out of the question, sadly.

Going back to the smooth uninterrupted back, you may notice there's no fingerprint reader. LG was among the pioneers of rear-mounted sensors when most others were putting them on the front in the bottom bezel, but took its time with adopting under-display readers. It's taking its time no more, the G8X has one. 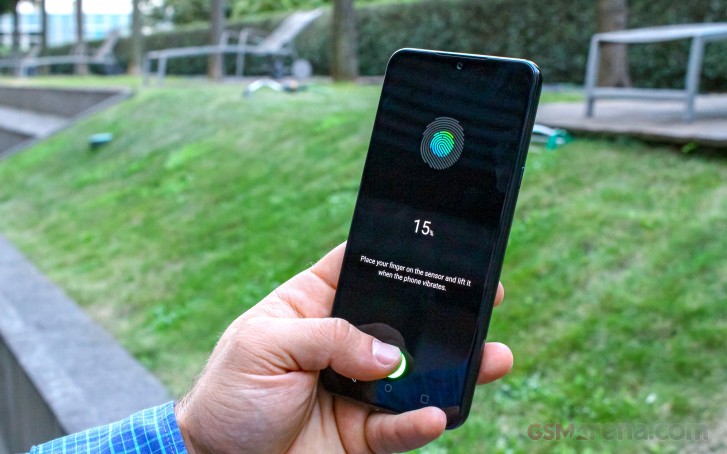 We couldn't really test it beyond snapping the above shot, but since the sensor isn't the ultrasonic type that Samsung uses on its high-end devices, the G8X's should probably work just fine. One benefit to having it in the display, as opposed to on the back is that you can now use it with the DualScreen accessory - more on that later. 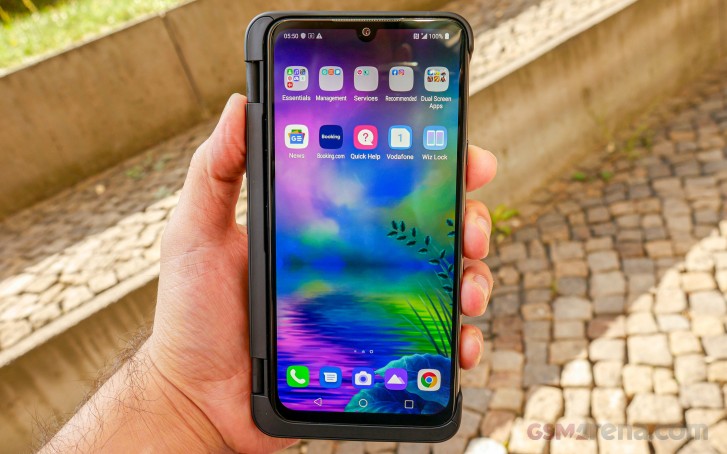 The regular screen of the G8X is a bit of a side step compared to the G8. It's bigger at 6.4 inches in diagonal (vs. the G8's 6.1 inches) but resolution has been brought down to 1080x2340px from the G8's 1440x3040px. It's not state-of-the-art in terms of pixel density, but it's nowhere near what we could call coarse. Additionally, being an OLED, the G8X's display provides good outdoor legibility - we had no issues during our photoshoot. 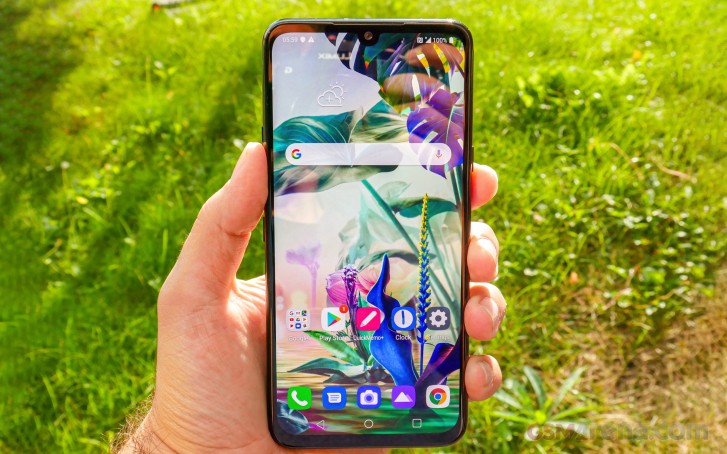 The GX8's camera notch is much smaller than that of the G8, as it only needs to house the single actual camera. LG has abandoned the ToF module, so there's no palm gestures or Hand ID on the G8X - as if someone's going to miss those. The new camera is pretty promising too - the 32MP Quad Bayer sensor's 8MP shots should be miles ahead of the regular 8MP selfies LG's recent high-end devices have offered. Sadly, we couldn't test those out either. 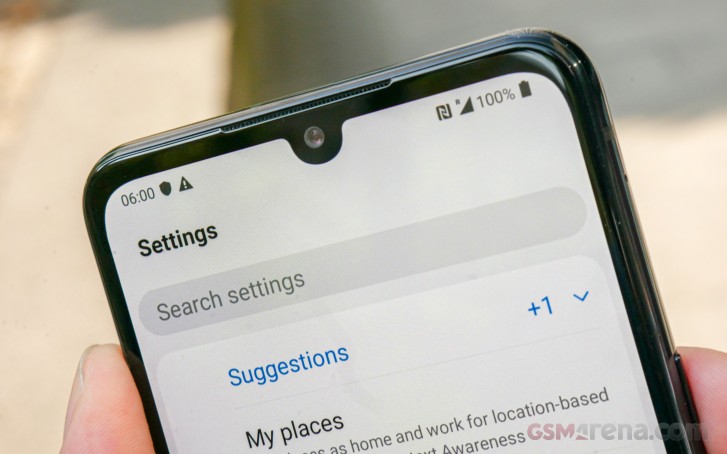 By the time the G8X is going to hit the market, LG will be ready with a thoroughly redesigned LG UX 9.0. We only saw in the presentation and it wasn't actually running on the early G8X units we had. However, our initial impressions are quite positive - we're digging the new fonts, the minimalist graphics, and the card based look.

Other software bits LG mentioned were coming to the G8X include further additions to the camera app - LG's long been a leader in offering tons of manual control and unrivaled video recording. 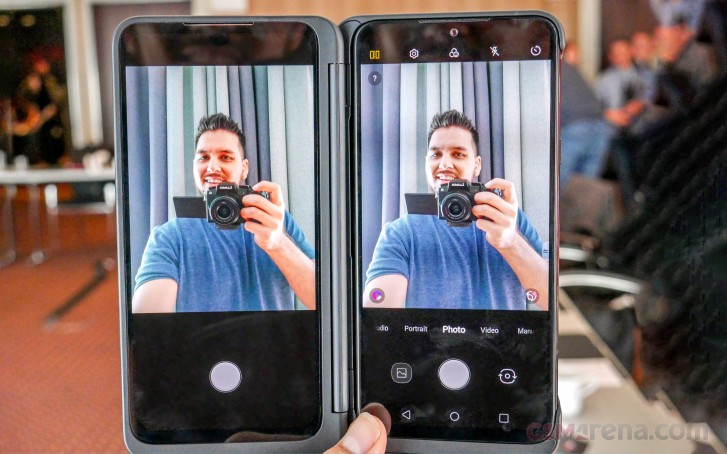 So on that front, we've been promised the ability to switch between rear and front camera while recording, which makes you wonder if that implies the front cam will capture 4K. Then there's ASMR recording - expect to see a flood of videos of pets munching on stuff. And, perhaps the most useful of features, 4K timelapses - why isn't everyone doing this already?!

I'm very suspicious about LG's claim that the 2nd screen only sucks down 20% more juice. The screen is the single largest power draw on every phone I've ever used, which makes sense. How did LG get this 20% number? I'm guessing they turned the lighti...

I want it without the dual screen

I have several LG phones. Even though the battery seems too small on paper, the phones actually have good battery life. And are quick to charge as well.