The LG G Flex has a new brand of OLED screen - Plastic OLED - manufactured by LG. Traditional OLEDS have their light diodes on a sheet of glass, but by using a plastic substrate LG managed to make the display flexible. The display unit itself can flex more than the phablet itself, but LG settled on this curvature as the most comfortable after testing numerous prototypes.

Anyway, the screen has a massive 6" diagonal but the resolution is fairly low for the size, 720p. This works out to 245ppi, which is a mid-range number. Still, it's a full RGB matrix rather than a PenTile, which does help. Unfortunately, there's a problem - at first we thought it was image noise in the wallpaper, but as we looked closer, we saw it in the UI too. The display seems to have issues lighting its pixels evenly, which causes the noisy look. The pixel density isn't high-enough to hide individual pixel errors either. The end result is fairly disappointing for a device in such a high price bracket, because once you see the problem, you start noticing it everywhere.

We used our microscope to snap a close-up photo to illustrate the problem. We took a screenshot of the LG G Flex UI and put it on our trusty old Nokia N8 (which has an AMOLED screen of comparable pixel density). The image below shows what the image looks like on the G Flex, on the N8 and finally, what it's supposed to look like. LG is promising 330 nits of brightness, which isn't very high even for an OLED (and LCDs can more than double that). Our own measurements put the maximum brightness at 411 nits and we kept the brightness slider at or near the maximum most of the time.

Typically for OLED, the display has stellar contrast and rich, saturated colors. Following the lead of Samsung and Nokia, LG introduced modes for the screen, which let the user control the saturation. You get three options - Standard, Vivid and Natural.


The screen is fairly reflective, which combined with the relatively low brightness results in sub-par sunlight legibility. By the way, LG claims the curvature helps reduce glare but, although we can see a point, we failed to notice a significant difference.

The screen is protected by curved Gorilla glass. That's scratch-resistant but, unlike the coating on the back, once you scratch it, the damage will stay. We guess the special coating isn't transparent enough for screens yet, but it's something that's sorely needed by smartphones. All scratch-resistant glass eventually gets scratched and while we can live with gouges on the back, damage to the screen is harder to tolerate.

The LG G Flex has a huge 3,500mAh battery despite 8.7mm thick body that is curved to boot. A large OLED screen isn't ideal for long battery life, but in the end things seem to balance out. The endurance rating is a stunning 97 hours - you can expect to go between two and three days without charging, depending on how much web browsing you do.

Web browsing is the Achilles heel - the G Flex lasted nine and a half hours, which while good is not much for the class. Talk time and video playback are at or near the top though. 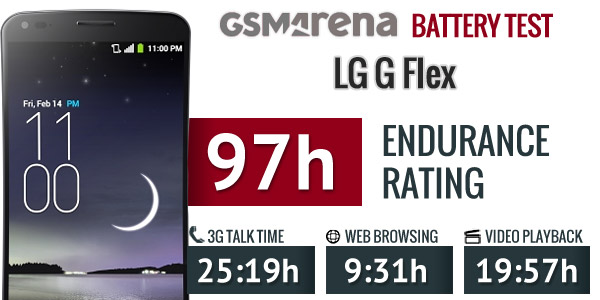