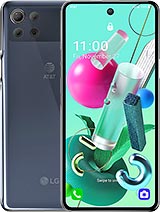 wow running the latest greatest android 10.... you will be on 10 forever

Q: how to stand out from the rest of good looking smartphone?
A: make an ugly one

The features are good. But 5Mp ultra wide camera is very low.Lg should have provided at least 8MP ultrawide camera and a 24MP front camera, a larger battery capacity,higher refresh rate and a smaller punch hole.

even in online stores like ebay...Mi 10t, MI 10t pro u can find them
they have GLOBAL ROM

My God that camera looks so ugly.

Just out of touch with the actual industry.

I can see this LG being a direct competitor to the OnePlus Nord N10 5G. This LG has a 3.1 Type-C instead of 2.0 Type-C in the OnePlus, but the OnePlus has a larger battery capacity at 4,300mAh compared to this LG's 4,000mAh.

Much better than LG K61. To begin, everything is great. Finally a snapdragon processor, more ram along with Quickcharge. The hole punch camera shoud be in the corner and the fingerprint under display. An O-led screen would be nice at 90hz and a 5000mah battery wouldn't hurt either. Also a thinner aluminum frame would be nice. Add these features and trust me you'll have an awesome smartphone!!!!!!!!!!!!!! Good luck LG and kick ass!!!

Anonymous, 29 Oct 2020Looks decent enough. That punchhole placement is awful though.They might as well had placed it dead center of the screen. LG haven't been able to come up with a decent design in a long time.

Looks decent enough. That punchhole placement is awful though.

Good but why put useless piece of camera sensors

i swear they are getting payed to make weird looking phones