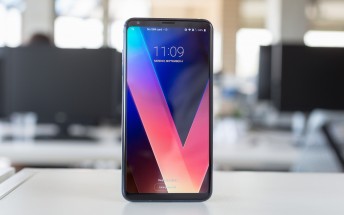 In the US, Sprint and US Cellular are already offering the LG V30+, and now T-Mobile is getting ready to join in the action. The magenta carrier has just announced that the V30+ will become available in limited quantities on November 17.

You'll be able to buy one for $130 upfront, then followed by 24 monthly installments of $30. That is, of course, if you use TMo's interest-free Equipment Installment Plan. If you'd rather pay the full sum at once when you purchase the phone, know that you'll have to part with $850.

The V30+ is basically just a vanilla V30 - but with 128GB of built-in storage instead of 64. T-Mobile says it ships with a "premium headset" in the box. The phone will work with the carrier's "super-advanced LTE network", including the 600 MHz band.

not worth it for v30+ unless they put 8GB RAM inside and 256GB internal.

When will this phone be available in India ?