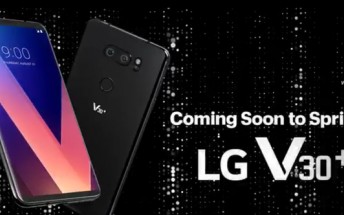 While T-Mobile, AT&T, and Verizon have all announced their plans to carry the newly-unveiled LG V30, Sprint has gone ahead and done something different. The carrier has revealed that it will be offering the LG V30+.

The revelation was made by none other than the carrier's CEO in a tweet.

The difference between the LG V30 and V30+ is storage. While the former comes with 64GB, the plus variant packs in 128GB. Given that no other major US carrier has announced its plans for the V30+, it's reasonable to assume that the model will be a Sprint exclusive, at least at launch.

There's currently no information on when the variant will go on sale and what price tag it will carry. Meanwhile, the V30 has made it to Netflix's list of HDR enabled mobile devices. The only other device that's there in that list is the Sony Xperia XZ Premium.

LG V30 will cost 900 in Germany, is exclusive to Carphone Warehouse in the UK

does the V30+ indian retail unit have B&O earphones packed inside the box??