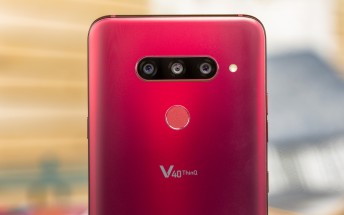 Verizon's LG V40 ThinQ got updated with Android Pie last month and now AT&T has released the latest version of Android for this 2018 flagship.

The new firmware carries version number V405UA20d and weighs around 1.5GB in size. It brings Android Pie niceties, new UI and new navigation to the V40 ThinQ, in addition to bumping up the Android security patch level on the phone to April 1, 2019.

It's unclear why an update seeding in June only has the April patch - it could be that LG is running behind schedule or AT&T taking too long to approve the release as US carriers often do. Hopefully this gets rectified in a subsequent update soon.

Either way, this update is rolling out over-the-air and could take at least a week or two to reach all the V40 ThinQ units on AT&T's network. If you can't wait for the update notification to pop-up on your device, you can try pulling the new firmware manually by heading over to Settings > About Phone > Software updates menu.

9 months after pie official release I'm still waiting to get it on G7. Too bad

It's been more than 8 months that Google Launched Android Pie / 9 and LG is still unable to give us a perfect date that when it would Release Android Pie / 9 For LG V30+, inspite of so many calls Given to them, there has been exact data coming from t...

I've never seen a brand more careless than LG. Despite huge criticism regarding updates by customers, they seem not to even bother releasing proper timeline to software roll out. Their recent fake propaganda of Software Update center turned out to be...