Let's cut right to the chase here - the swivel mechanism that makes the LG Wing so special. That's the bit that we were naturally most interested in, and the same is likely true for you. Overall, it left us with mixed feelings. On the positive side, it is surprisingly mechanically-sound. The hinge itself has a total of three anchor points to the rest of the body.

And the motion is really smooth. It is not perfectly linear, but that's entirely by design. Depending on how hard you fling the corner up, the rotation can start out fast and then gradually slow down as it goes. For the final little bit of the motion, there is a small hydraulic damper in place that takes over and gently cushions the last couple of millimeters of travel.

There are double locking points included to ensure the display stays in its open state firmly, as well as two springs that guide the entire process. This "locking" is more tension-based than anything else, simply meaning that a bit of extra force is required to start the opening or closing motion. You can definitely get a better visual understanding of what is going on from the official LG video above.

All things considered, this hinge solution is quite elegant, even if a bit over-engineered. Like we said, it works well in terms of ensuring smooth motion and feels quite durable. LG claims that it has validated the mechanism for 200,000 cycles of use, which should be more than plenty to cover the Wing's lifecycle. 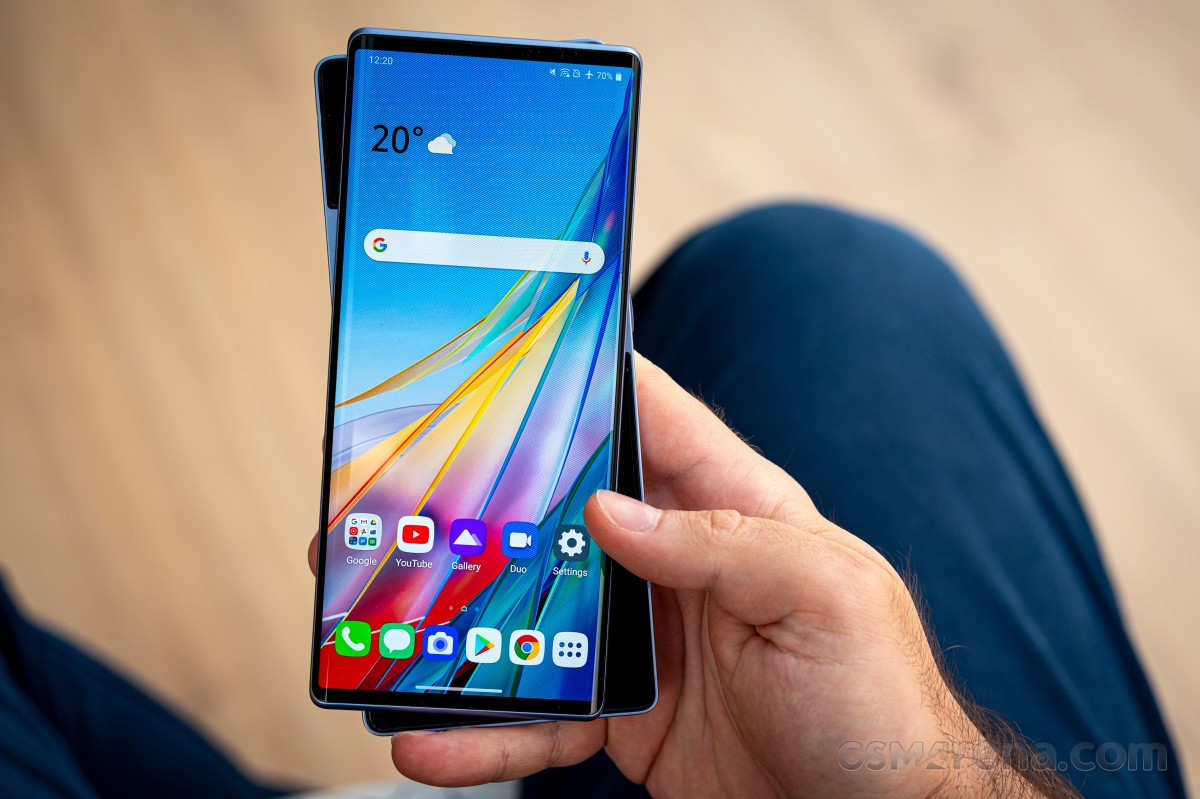 The most prominent issues we have with the swivel mechanism is that it doesn't take much to wobble the display sideways while using the Wing closed. Especially in landscape orientation, it's quite often that we found ourselves moving the screen around during gaming when we were swiping in the opposite directions with the two thumbs.

To LG's credit, despite its impressive range of motion, the swivel mechanism isn't overly wobbly. When fully closed, the display sits snug. This is crucial since any wobble between the two parts of the phone are very detrimental to the overall user experience. Rattling while typing on a closed Wing is a horrible feeling, which we actually got to experience on a pre-production unit. Thankfully, it is completely remedied in the review unit we received later. 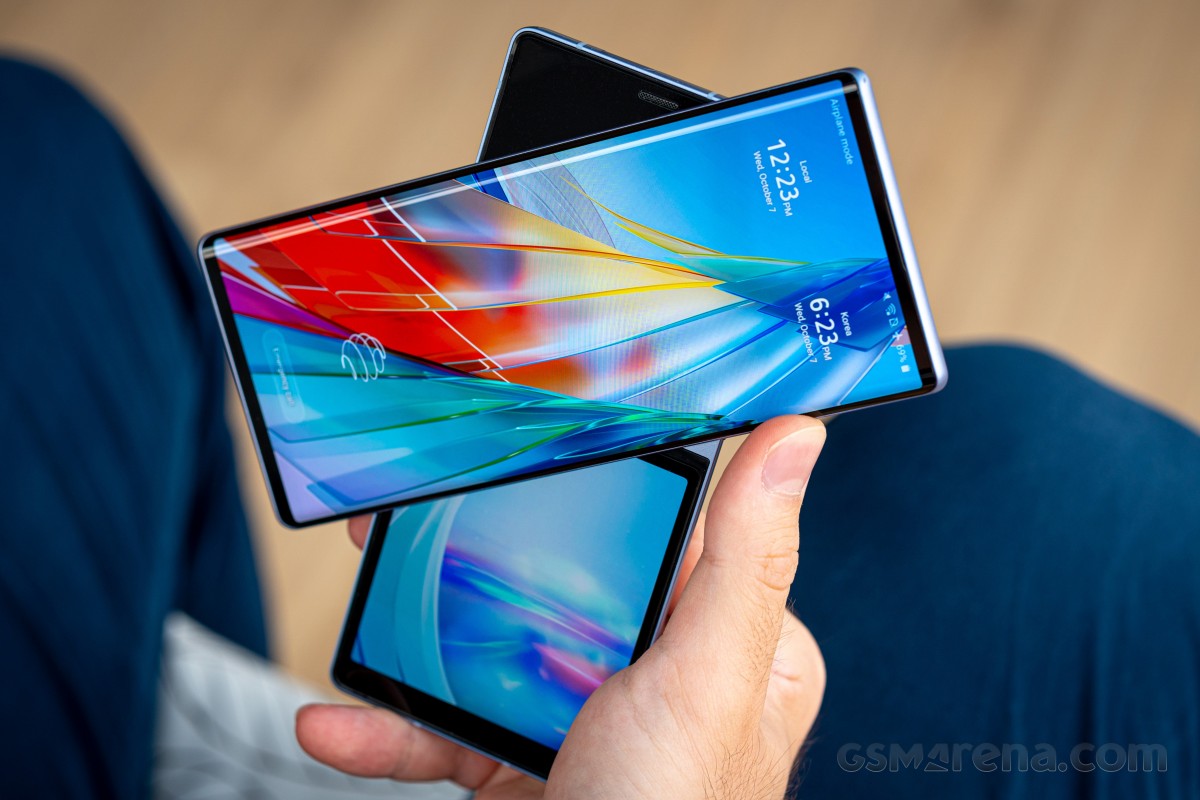 Opening the Wing single-handedly is an easy task once you get the hang of it. The only limitation is that it's almost impossible to pull off with the left hand as this is the direction the swivel travels up.

Closing it with one hand is a bit harder, but it's still doable. On a side note, since there is no dampening at the closing end, you can hear a satisfying metallic clack every time you close it 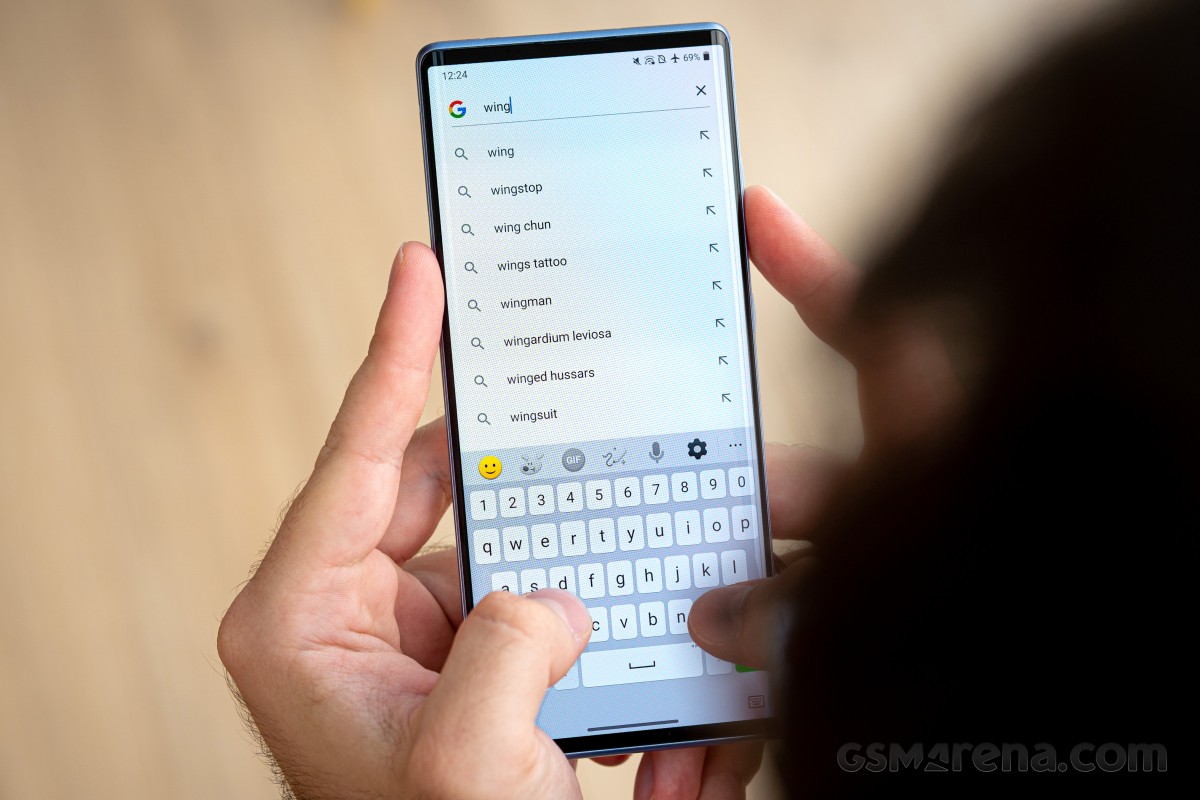 Once the phone is open, natural ways of using it include grabbing the bottom part and interacting with the secondary 3.9-inch display, while merely using the main screen for watching video or similar.

Alternatively, you would want to grab both ends of the main display for something like gaming. If the bottom part of the phone gets in the way, you can flip the whole thing around, which leaves the secondary one floating above it. It looks a bit odd, and grabbing the main display's thin base is far from comfortable for longer gaming sessions, but it does work. Plus, in this orientation, we never actually felt any wobble or give in the hinge. 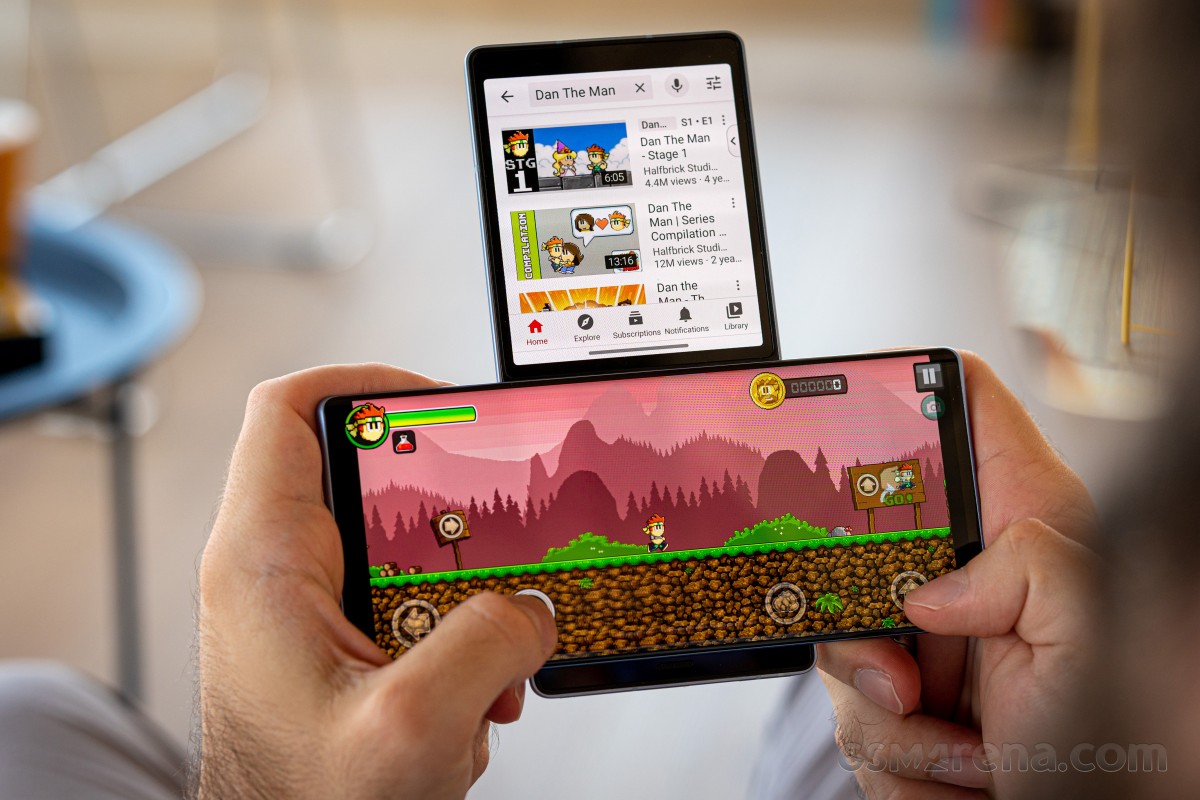 There is still the vital question of whether or not the swing mechanism will remain consistently tight or loosen over time. If the latter does occur, be prepared to live with some rattling on a closed display, which is quite unpleasant. Since this is all hypothetical, though, we can't hold any of this against the Wing. Our initial impressions of its hinge mechanism are largely positive. A long-term review is always in the cards, as well, if enough of you are interested in the actual longevity of the LG Wing. Let us know in the comments.

Controls and other design aspects

The LG Wing is a truly gorgeous device. Our Illusion Sky review unit looks stunning in person. LG has managed to pull off something special with the finish on the glass back. The light play here is in a league of its own. You can get every shade of blue and white, with green splashes depending on how the light hits it. And thanks to the silky, matte finish, the back panel looks quite unique and feels pleasant to the touch. It also handles fingerprints and smudges much more gracefully than a glossy finish would. 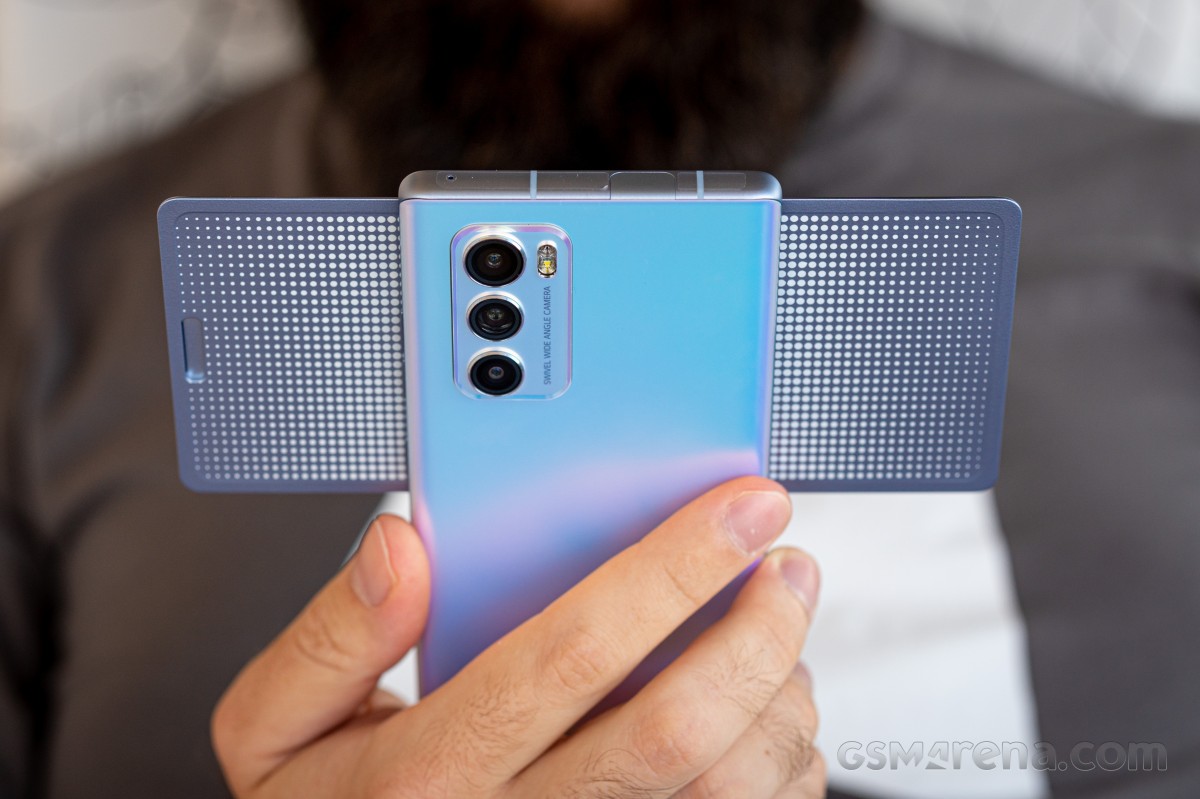 On to the subject of durability, the Wing feels nice and solid. It's not a device you would forget is in your pocket. However, the top swiveling part has a plastic frame that is susceptible to easier scratching and denting.

Another durability deficiency here is the lack of proper water sealing. LG has coated the internals of the Wing with a water-repellant layer, which was enough to earn the unit an IP54 splash-proof ingress rating, but it's far from the IP68. 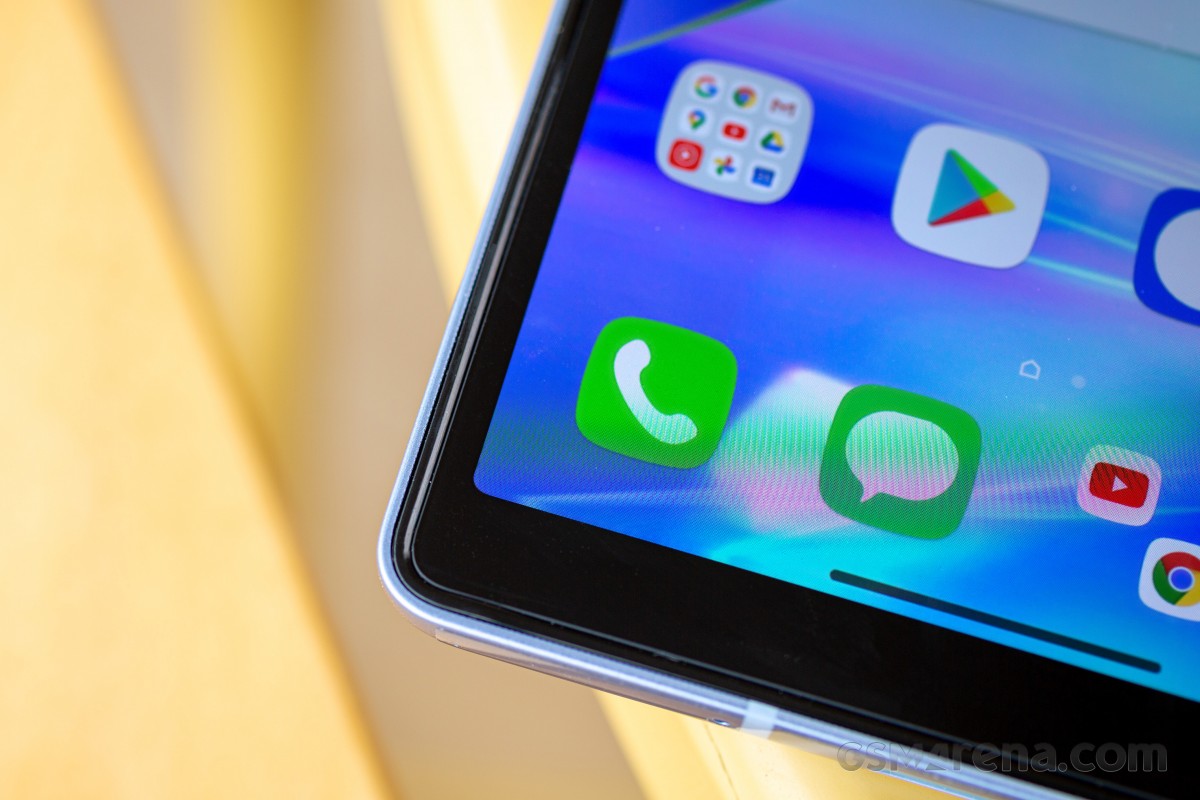 What might be more worrying than water, however, is getting sand or some other grime in between the two sliding parts. If you get any hard or abrasive material stuck in there, the bottom screen will be in for some nasty scratching.

There is a rim around the smaller screen, which should prevent stuff from getting in between the two panels. The rim itself is made from Polyacetal (POM), which is great for its dimensional stability and low friction and is generally widely used in high-performance and precision engineering. Circling back to our water concerns here, however, Polyacetal is susceptible to acid hydrolysis and oxidation. Even in small concentrations, chlorine, which is often found in tap water, especially when combined with higher temperatures, will likely cause degradation of the material. Certain forms of Polyacetal aren't particularly resistant to UV light either.

Bottom line is that the LG Wing requires extra care from the user due to its unusual construction. If nothing else, we would definitely suggest applying the included plastic screen protectors to both displays right off the bat.

We do appreciate that LG still went the extra mile to test the Wing for complying with various subsets of the MIL-STD-810G standard, which cover the use and transportation of military equipment. Still, that doesn't mean this phone is rugged or even close.

In terms of general controls and layout, there is nothing extraordinary about the Wing. The power and volume buttons reside on the right-hand side. They are conveniently positioned to use while the phone is closed, but are borderline unusable when the Wing is fully open. The buttons' small size and mushy nature don't help either. 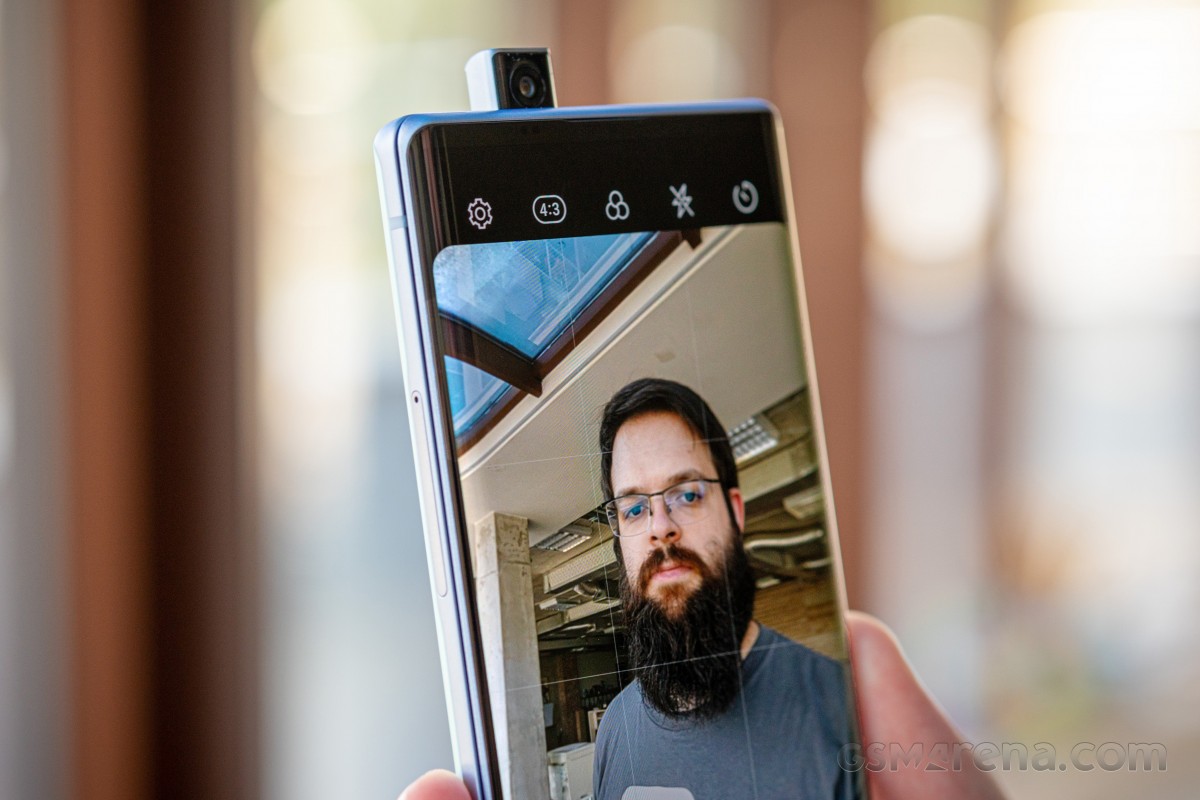 We can't fail to mention the pop-up selfie camera solution LG went for. On the one hand, we can see the benefits. Most notably, the notch and the hole-free main 6.8-inch P-OLED panel. However, we feel like LG could have gotten the same effect by sticking the 32MP selfie unit on the bottom half of the phone, behind the display. Of course, that would require you to open the Swing every time you want to take a selfie, whereas the pop-up makes it usable with a closed display. We can't complain about the extra utility. 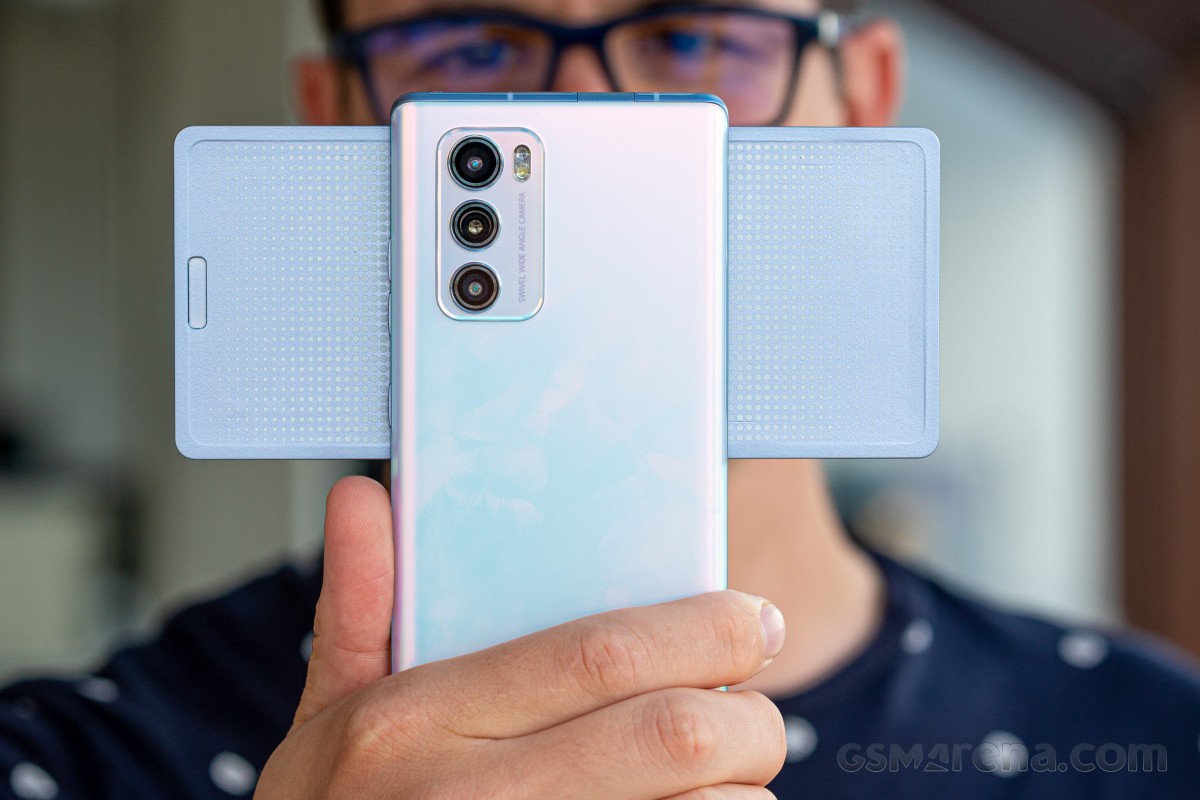 Plus, LG's implementation is quite pleasant and feels solid, from the smoothness of the slow-ish, but still tolerable pop-up and pop-down motion, to the excellent push and fall detection, that immediately retract the camera platform inside the body. If nothing else, we admire the engineering team's ambition, since the stepper motor assembly for a pop-up selfie is not an easy thing to fit even in a phone that doesn't swivel. Then again, at 10.9mm and 260 grams, the Wing is not your typical form factor device anyway. 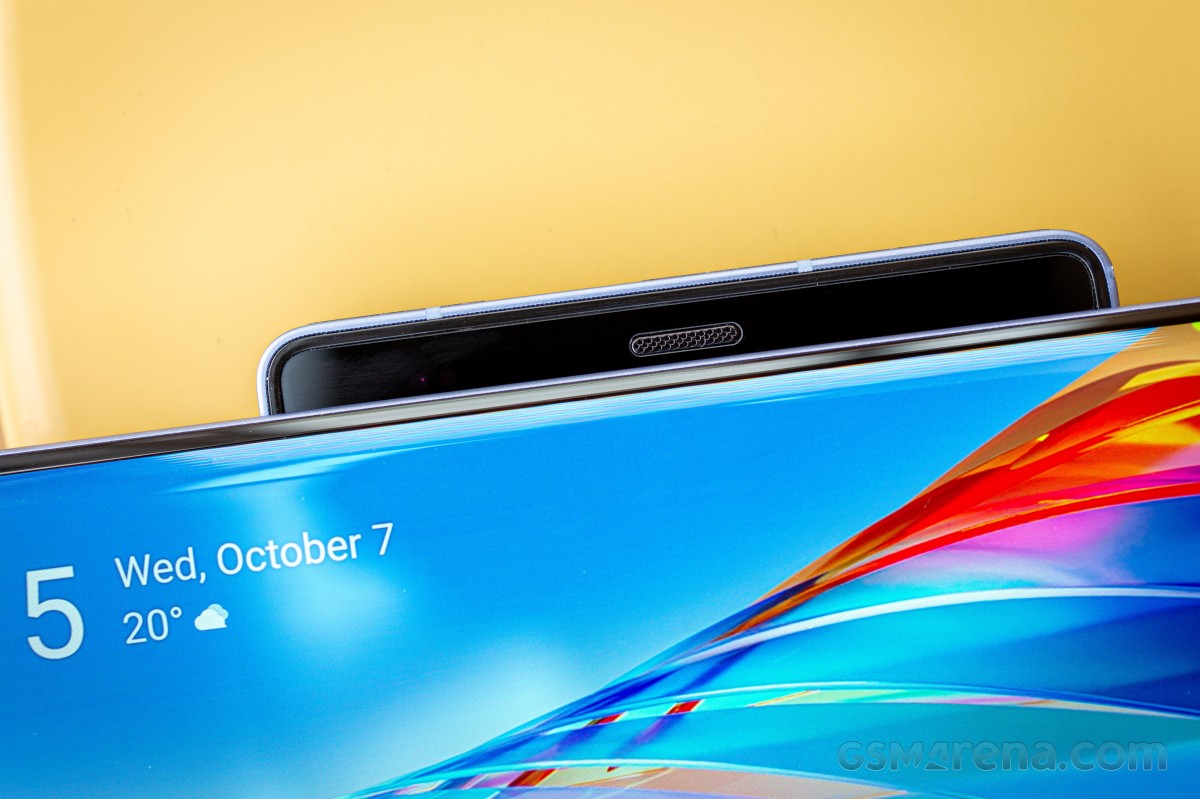 The Wing just has one bottom-firing speaker. There is no hybrid stereo setup with the earpiece. Not that one would really make much sense, since ideally, you would want a speaker at each end of the display so that those swivel alongside it. There is simply not enough space in the top half of the current design to pull that off anyway. In case you were wondering, sound comes through just fine when you are using the earpiece for calls with a closed display. The way this works is through an actual sound channel, going from the back of the display to a small opening above it. An intriguing solution to an odd circumstantial design challenge.

LG went for a trendy under-display fingerprint solution for the Wing. A choice we understand, to some degree. However, we think that a classic capacitive, rear-mounted reader would have made more sense and provided better versatility, given the form factor. Still, it's about as good as modern under-display readers go - decently speedy and reliable. 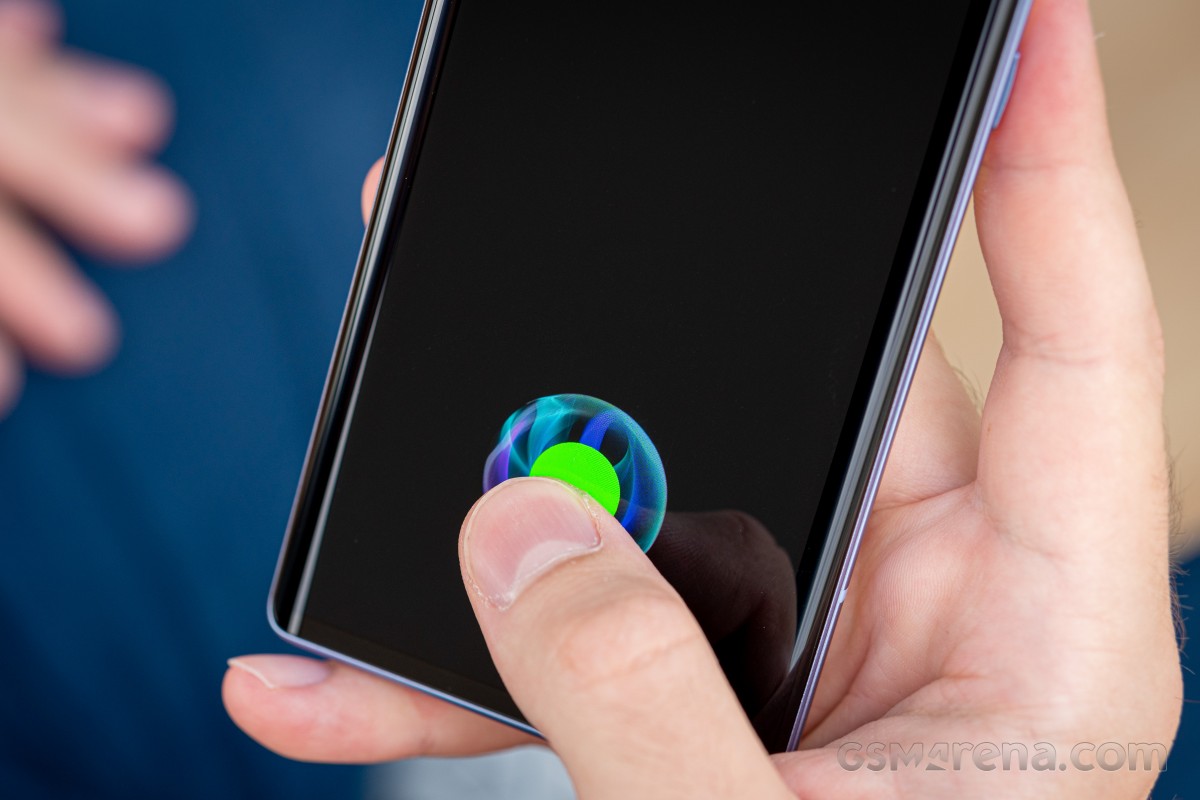 The Snapdragon 765G chipset inside the Wing has a 5G modem built-in, which is more cost-, space- and energy-efficient than the external modems the flagship Snapdragon 865 chips use.

LG Wing from all angles

There is also Bluetooth 5.1, with LE and A2DP, Dual-band Wi-Fi ac, GPS with A-GPS, GLONASS, BDS, and GALILEO support, NFC, Wireless charging and the Type-C port houses a speedy USB 3.1 interface, with OTG support. Expandable storage is also an appreciated bonus, even if the microSD slot shares a space with the second nanoSIM card.

I managed to own this phone at the end of July 2022 for the equivalent of $270. It really didn't take long for me to fall in love with this phone, especially its gimbal stabilization with full manual control. I also like how useful the second sc...

AT&T only allows phones to be updated if they are on AT&T plan and sim card. So to be short, you will not be able to get any updates out of USA unless you have AT&T international roaming and AT&T sim card activated in your phone. Good...

I Bought LG Wing AT&T branded phone in Pakistan, problem is this that it sticks with android 10 and when i tried to update my phone, i received a message that your phone is upto date, please guide me on it. Thanks in advance