LG's next flagship might be called G7 after all

We began this year by finding out that LG plans to rename its flagship series - hence, the device formerly referred to as G7 would be called something else. This handset is expected to become available in April.

Now though the plot thickens, since LG's own official website for the UK lists the G7. The mention is buried in a page describing fast charging and the various iterations of Qualcomm Quick Charge supported by its smartphones. 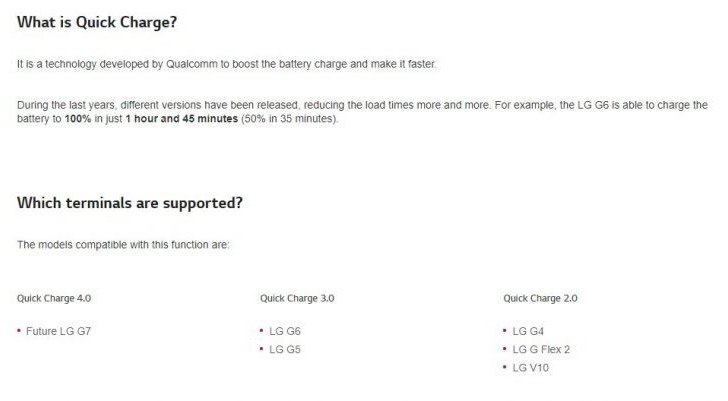 Sure enough, under Quick Charge 4.0 we can see "Future LG G7", while the G6 and G5 have shipped with Quick Charge 3.0. This may be the first confirmation that LG's changed its mind once again, or it could be that the people in charge of the UK website filled out that info before the company decided not to call its next top of the line device G7.

We'll probably only know for sure whenever the handset is announced - that might happen at MWC next month, or at a special event in March, the rumors haven't agreed on this one so far. Whatever it ends up being called, the phone is expected to sport the Snapdragon 845 chipset, an OLED touchscreen, and iris scanning.

Improve Selfie Camera...that Only me excepted

What the actual fck? G6 had all glass back and front. GG 5 on back with GG 4 on camera and GG3 on front. Plastic was nowhere to be seen.