After successfully topping our all-time battery life chart, with the 5,000 mAh pack inside the Realme 6i, which you can read more about here, the Chinese company apparently has its sight set even higher. A TUV certification filing for a particular BLP793 battery pack has now been brought to light. Mainly since its rated capacity is a whopping 6,000 mAh. Well, 5,860mAh, to be precise, with a typical capacity of 6,000 mAh. But, the point stands. 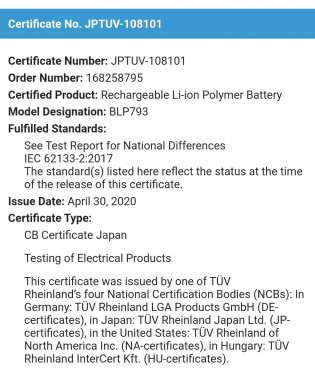 The jury is now out on which phone we can expect to see this pack in. That’s more guess-work than anything else, at this point. Going through some of the possibilities, we have the new Narzo 10 pair of phones, which we can probably exclude from the suspect list quite easily. That is, if we subscribe to the theory that the regular Narzo 10 will be a rebranded Realme 6i, while the Narzo 10A – a triple-camera variant of the Realme C3. Both of those phones, originally packing 5,000 mAh of juice.

We also know that at least one Realme X3 phone is on the way, offering an impressive 60x zoom camera. The X3 SuperZoom is rumored to only fit a 4,200 mAh battery, alongside its 6x periscope camera, though. Then there is the alleged X3 Pro – a proper Snapdragon 865 flagship. Probably not the most likely candidate to make the most use of a massive battery. Perhaps a potential vanilla Realme X3? The idea for a Realme U2 is also being tossed around. We’ll make sure to keep you posted if more information becomes available.

So after the Realme UI, the brand also has its certified battery. What are they bringing next? Realme chipsets?

6000 mah battery power will be epic. Realme is doing some wonderful things for the mid-range and budget consumers. Realme C3 is one such example.

Realme has its eyes set on greater things. I hope its comes with a smartphone that also has a powerful chipset; like those of mediatek.