Realme seems to be working on a second Snapdragon 865 powered phone as a previously unseen RMX2072 device posted a score of over 600,000 on AnTuTu. Rumor has it that this will become the Realme X3 Pro.

Back to the alleged Realme X3 Pro. Based on the memory score, it will have UFS 3.1 storage (for comparison, the X2 Pro had UFS 3.0). 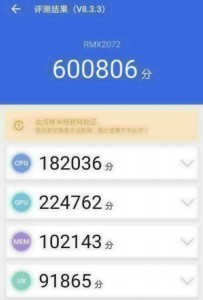 Leakster @IceUniverse is hinting that this is a gaming phone, so there may be more to the phone. A higher than 60Hz refresh rate is a given as the X2 Pro and X50 Pro both have 90Hz screens, X50 even goes up to 120Hz. That and the flagship chipset is enough to make this a great phone for gaming, but there may be something more.

Unknown Realme phone with triple camera and carbon fiber back

Whether it’s a gaming phone or not, the Realme X3 Pro could be related to the phone that leaked at the end of April, the one that featured a distinctive vertical strip running down the middle of its back.

PUBG and others are not games to me, because I see no point of playing lesser versions on touchscreen. I like mobile games designed for touchscreen, not subpart ports on PC games.

Yes, we can see it that way. And well, I hate folding phones, they are expensive and overly complicated for no practical reasons, they are almost useless... The Alpha is a special beast...