MediaTek has officially introduced its latest 5G modem Helio M70, as promised earlier this month. The new chipset is built on the 7nm process and is also the first platform that includes ARM’s Cortex-A77 CPU and Mali-G77 GPU. The announcement was part of this year’s Computex, taking place in Taiwan. 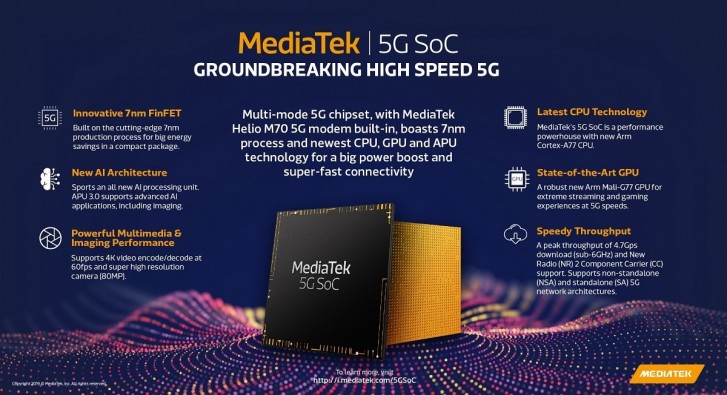 The 5G modem is called Helio M70, while an official name of the SoC is yet to be announced. Once introduced, it will allow all smartphones with the chipset to use the 5G standalone and non-standalone sub-6GHz networks. It also supports 2G, 3G and 4G networks, when the device is in an area not covered by 5G antennas. Joe Chen, MediaTek president, called the chip

the most powerful 5G SoC announced to date.

The new chipset will be ready to be shipped to manufacturers by Q3 2019, meaning products with it should hit market shelves at the beginning of 2020.

MediaTek will issue a separate announcement with the complete specs sheet “in the coming months.” Smartphone companies collaborating with the chipset company are Oppo and vivo, so we expect both BKK subsidiaries to launch actual 5G flagships in less than a year.

The current press release said the Helio M70 will reach a peak throughput of 4.7 Gbps download speeds (on the sub-6GHz network) and support New Radio (NR) 2 Component Carrier (CC). It will also be able to support 4K video encoding and decoding at 60fps and can work with smartphone camera sensor of up to 80 MP resolution.

G77 easely should rival or smash adreno 640, it is massive improvemnt from g76 in s10

Fyi, Google services is not banned in Taiwan whereas they are banned in China. That pretty much shows how separated their government is no matter how much you try to convinced us they are the same country or something. Trust me. Even Taiwanese won't ...