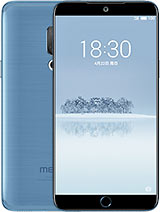 Ojex, 14 Jul 2018The biggest weakness of this phone is : SOFTWARE !As GSMArena said :
"If you feel comfortable with limited support and no more software updates, it is definitely a worthwhile option"

The biggest weakness of this phone is : SOFTWARE !

tinchow, with the Meizu 16 coming the prices are dropping every week on the 15. Aliexpress is down to $378 for the Meizu 15 right now.

this phone looks awesome, and has very nice features, but costing more than u$400 is simply too much, I can get a Redmi Note 5 for half the price!

hinshal, 06 May 2018Not plastic, but high grade polished metal. The white version I don't think is metal because it does not have any cut outs and plastic for antennas, all other colors have and that is a proof are metal, except white.

I don't use either face ID or fingerprint to lock my phone. I leave it unlocked. The fingerprint scanner sure is small in size. I don't use mtouch either either and am not completely sure what it is. I think you mean navigating using that small fingerprint scanner, which I just tried so that I could respond to your question. For me not as easy as navigating using the three symbols at the bottom of the screen, left arrow for back; circle for home and a box which show the apps which are open; or I just swipe the screen to navigate, I am an old dog; not quick at learning new tricks.

I can tell you for sure it does not support a micro memory card. I bought the 64 GB version of the phone, liked it so much I figured I would buy a 64 GB memory card and bought one, just being indulgent as I didn't expect the increase in memory would affect anything. When I went to install the memory card....whoa......won't fit in the SIM tray. Only room for two nano SIM cards, no room for a memory card, Yea some reviews say it supports a memory card; fooled me.

daocat555, 27 Jun 2018If you have waited this long I would say don't go for the M... moreDaocat555.... can you tell as about fingerprint sensor is it ok to use or because the small size is not practical and what about m-touch is it helpful or not. finally GSMARENA said there is no micro SD card slot but many reviews they confirm existence of card slot.

If you have waited this long I would say don't go for the Meizu 15, but consider the Meizu 16, which just might have an Oreo based Flyme. From the rumors about the Meizu 16 I am considering buying it.

Nougat, seriously?in summer 2018 ?
too bad, I own a Pro6 and still on Nougat too, with was a very recent update.....
for that price.... you get Oreo and faster updates on other brands.
Too bad, was going to buy this one for me and one for my wife, we are both....were both Meizu fans.....
But who knows, maybe Meizu will finally wake up also here in China :)

The stereo speakers have a nice sound output during calls. The 3000 mAh battery is sufficient and charges very quickly. It comes with no bloatware at all except for the weather app, which I don't use and thus far have been unable to uninstall.

The Meizu 15 has a 4-axis OIS, 2x optical zoom, dual pixel phase and laser detection autofocus, and a six-LED dual-tone flash which the nova's do not have. Concerning the lack of OIS (optical stabilization) on the nova 3e gsmarena (I think) was dripping with sarcasm when they wrote, i quote:

For starters, it requires about 20s instead of just 4s. And your phone should be on a tripod the whole time - handheld is not an option unless really messy is what you are after. And if you comply with everything, you will still end up with one quite dark picture.
So, if you have a tripod lying around, or something to keep the phone stable, just use the Manual mode with long shutter setting or the Light Painting mode (though it's not that good, either).

Honestly, I have yet to take a single photo with the Meizu 15 (it's on my "to do" list), but the other evening during a power blackout I used the flashlight to walk home, and the flashlight was quite bright. Once I got home I kept the flashlight on for over an hour until the power came back up, so I would have some ambient light in my room. The battery had no problem with this.

For me, low weight and body size are important in a phone as I carry it around. Good speakers are important as I listen when I am in a phone call. The Meizu 15 does the things I want it to do well. I don't need a big screen or a powerful chipset. From the reviews that I have read since I bought the phone it sounds like the camera's are very nice, and that's good to know and I do expect to be using the camera in the future.

When will the full review on this come out? Looks like the perfect entertainment phone

When the global version of this device would be available? And will it support B20 frequency?

Richard, 20 May 2018I own this phone for 2 days. First impressions are all pos... moreYou should probably flash a clean chinse verison of Flyme on your phone, then you will be able to get OTA updates. However, you will need to install google services from the Meizu appstore in order to get Play Store.

How this phone with Hybrid SIM and no card slot??? any one can explain....