In the beginning of August the Meizu 16 arrived in two iterations - a vanilla version and a Plus variant with a bigger screen and battery. According to Jack Wong, Meizu CEO, a third addition to the 16 portfolio is coming in September with the name 16X (previously rumored as Meizu X8).

The alleged upper midranger just got benchmarked at AnTuTu. A Meizu phone with the model number m1872 scored 164,726 with a Snapdragon 710 chipset, hinting this is indeed the Meizu 16X. 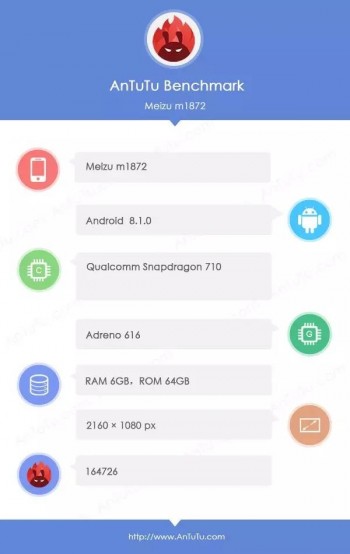 The listing also reveals the phone will have Android Oreo 8.1, likely used as a base for the latest Flyme UI. The Meizu m1872 will have 6 GB RAM and 64 GB storage, but hopefully will also have a microSD slot to expand.

The resolution of the phone is an interesting one - it is 2160 x 1080 pixels, or an 18:9 ratio. It means the Meizu 16X most likely will stay away from any notches, unlike plenty of other fellow Chinese companies like Huawei, Xiaomi, Oppo, vivo, etc.