The Moto Edge 20 and Moto Edge 20 Pro popped up on TENAA, revealing a launch is right around the corner and now the company has finally revealed the launch date - August 5. While it doesn’t mention the phones by name, the poster suggests a proper camera phone, and that’s what the Edge 20 series is bringing.

Another confirmation is the fact that both phone appeared on other platforms - the XT2143-1, believed to be Edge 20, hit Geekbench, whike the XT2153-1 Pro came up on the Thai NTBC website.

The Moto Edge 20 has been benchmarked with a “berlin” motherboard, which is a code name for the Snapdragon 778G chipset. It will have an 8GB RAM option and will run Android 11. The Edge 20 Pro, on other hand, has no specs listed at the NTBC, but at least we have a confirmation on the name, as well as its 5G capabilities. 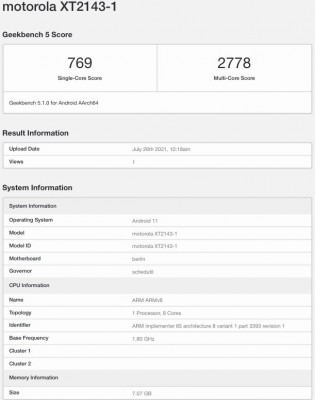 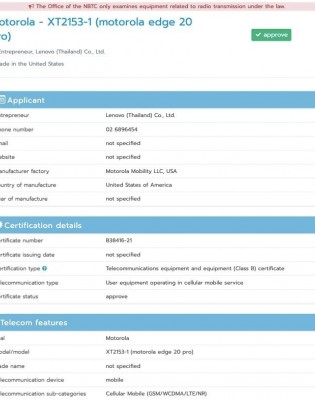 The Edge 20 lineup is expected to include three phones - Lite, vanilla, and Pro. However, the Edge 20 is allegedly going get a different version in North America with a completely different specs sheet, tallying the total lineup to 4 devices.

This is not even accurate.

I've been a Motorola user for 20 years. I currently have the Z4 and all the mods. Camera is a bit lacking and the battery is degraded to the point I have to replace phone or battery soon. I will buy a flagship phone from Motorola if it's a ...