Motorola finally officially revealed their first device that runs on the latest Android OS dubbed Motorola DEXT internationally, except for the USA where it will be sold as CLIQ. This smartphone is the first high-end device coming out of Motorola labs for quite some time. 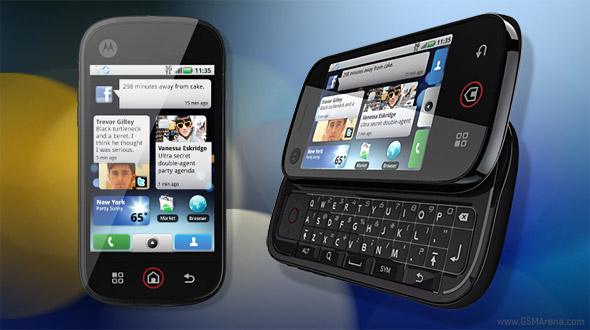 Moto DEXT has a sliding hardware QWERTY keyboard and large 3.1" capacitive touchscreen display of HVGA resolution (320 x 480 pixels). The capacitive nature of the display also promises multitouch functionality, yet we don't have an official confirmation of that.

The DEXT gears up most of the latest technologies such as GPS enhanced with a digital compass, Wi-Fi, Bluetooth, a 3.5mm jack, a 5MP autofocus camera with geo-tagging and video recording in HVGA@24fps resolution. There's also quad-band GSM/EDGE connectivity and tri-band HSDPA at 7.2 Mbps.

Motorola CLIQ runs the latest Android OS v1.5 (Cupcake) and is powered by a Qualcomm MSM7201A platform with a 528MHz processor. The new Moto has 256MB RAM, 512MB ROM and 1GB of user storage supports up to 32 GB microSD cards.

MOTOBLUR syncs via push with Twitter, Facebook, Gmail, MySpace, Yahoo, Last.fm and other services and similarly to Palm's Synergy and HTC Sense UI, Blur aggregates all your contacts from these communities into a single phonebook. MOTOBLUR also offers a remote wipe feature and GPS tracking of the phone from a desktop computer similarly to Apple's MobileMe.

Motorola CLIQ is offered in Midnight Titanium and Winter White colors and is expected to hit the market October in Europe and December in the USA (T-Mobile USA).

Motorola CLIQ has been briefly spotted by the Engagdget team over at T-Mobile website for a price of 400 US dollars without a contract, while other sources suggest a price of 200 euro. Either way, it surely sounds like a nice deal.

Motorola DEXT as it is known here in the UK is the new mobile phone released by Motorola Inc on October 2009 in the UK on Orange Network. This Dext from Motorola is powered by Android based operating system and has built-in social networking capabil...

Oh I wish that could happen. Unfortunately EVERY company is just out for personal gain. They say they form alliances and what-not, but when you look at the situation clearly, it's all about the end result: Making money. Through this is the succe...