The Motorola Edge 30 Pro has a sleek and minimalist design with no frivolous hardware accents and stylistic touches.

The triple camera is placed in the top left corner with a few key specs printed under the flash and mic pinhole. The island actually has a convex profile - it's raised up to the camera lenses' height and it slopes down towards the sides, almost flush with the back panel. 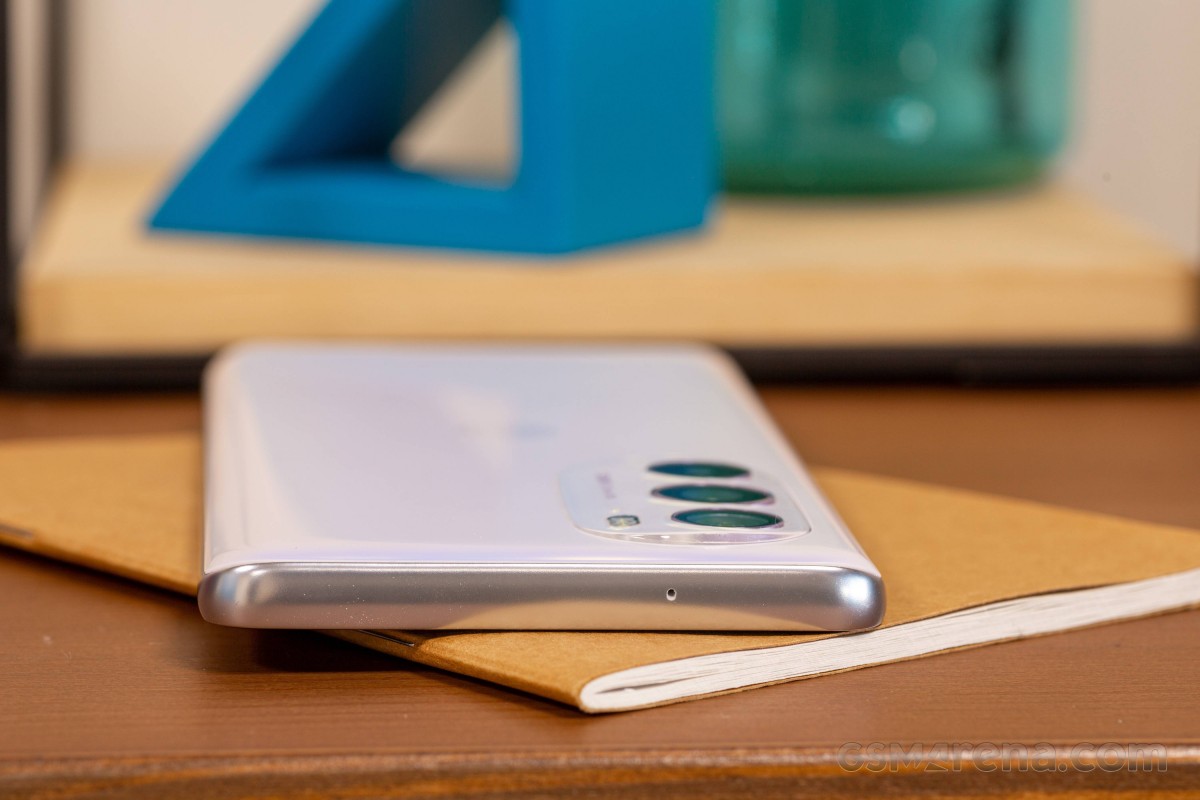 We have the Edge 30 Pro in the Stardust White colorway and it's one of those pearlescent paintjobs that can appear anything from white to pale cyan, to pale magenta, to gold if it's under direct sunlight. 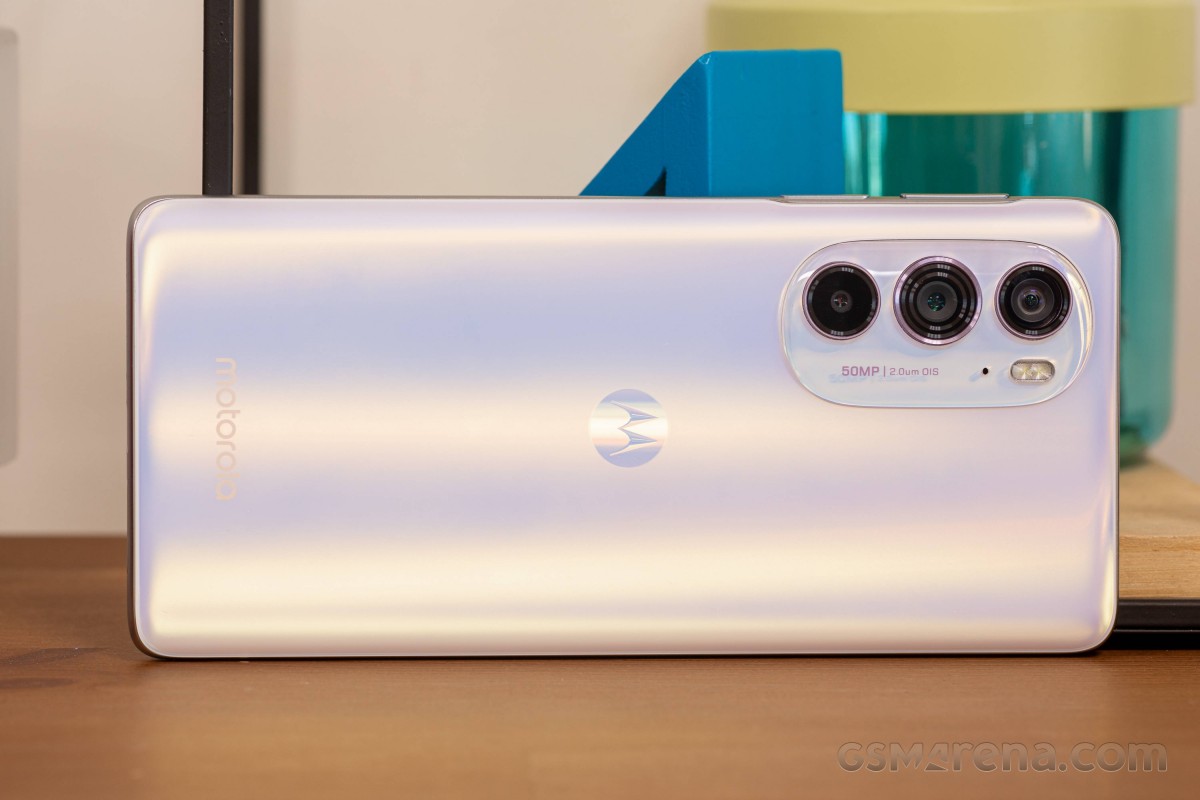 The alternative is called Cosmos Blue and has a similar colorshifting effect. It's in a different part of the spectrum, though, adopting all sorts of blue, blue-green, and dark purple hues. Either color option looks plenty attractive to our eyes - we have no clear favorite. 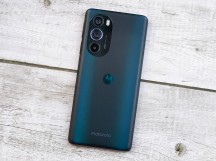 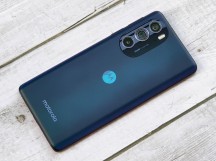 A case can be made that the White back is less prone to showing fingerprints - the Blue one seemed to be a bit more keen on showing them. Then again, both have a frosted surface so the smudge situation is nowhere as dire as on a glossy back. The flip side is that grip is pretty low - the usual trade-off. 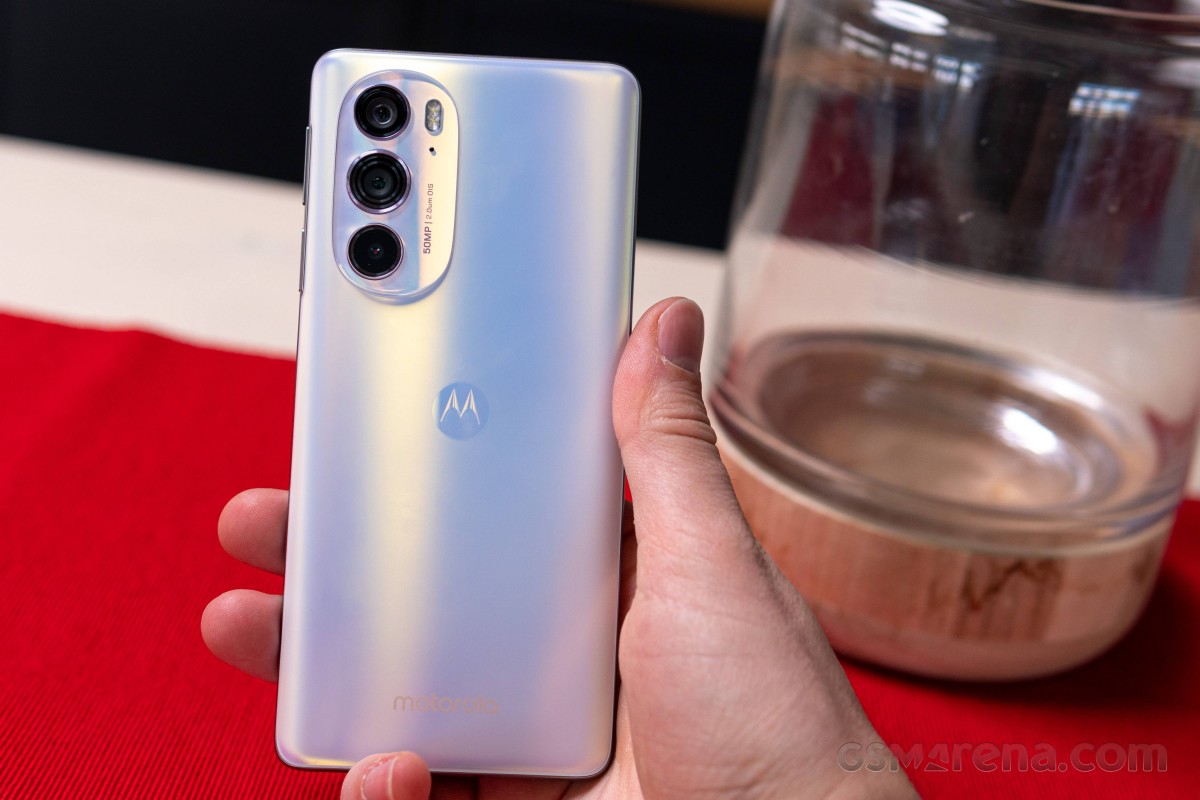 A bat logo and a Motorola badge on the back is what you get for branding and that's all. No pesky regulatory markings - in typical Motorola fashion these are strewn in whatever available space there is on the bottom, so they're both in plain sight, yet never really in your face. When it comes to materials, the Edge 30 Pro is a bit of an unusual hotchpotch. There have often been phones with different types of glass on the front and the back, but typically it's the newer material that protects the display, while the back gets a generation or two older version. Not so here - the display is covered by Gorilla Glass 3, while the back is GG5.

Then again, to the best of our knowledge, Gorilla Glass scratch resistance peaked at generation 3, with further efforts focused on improving shatter resistance, which comes at the expense of scratchproofing. So, this Moto just might be the best current option for display protective glass if you're one to never drop your phone. Then there's the plastic frame. Glass-sandwich designs have been produced with plastic frames - OnePlus does it (9, Nord, Nord2), Xiaomi does it (a whole bunch of Redmis) and Sonys and Realmes have been made this way too. But none of those were flagships and this is Motorola's flagship, the way we understand it, so splurging for some aluminum seems warranted. 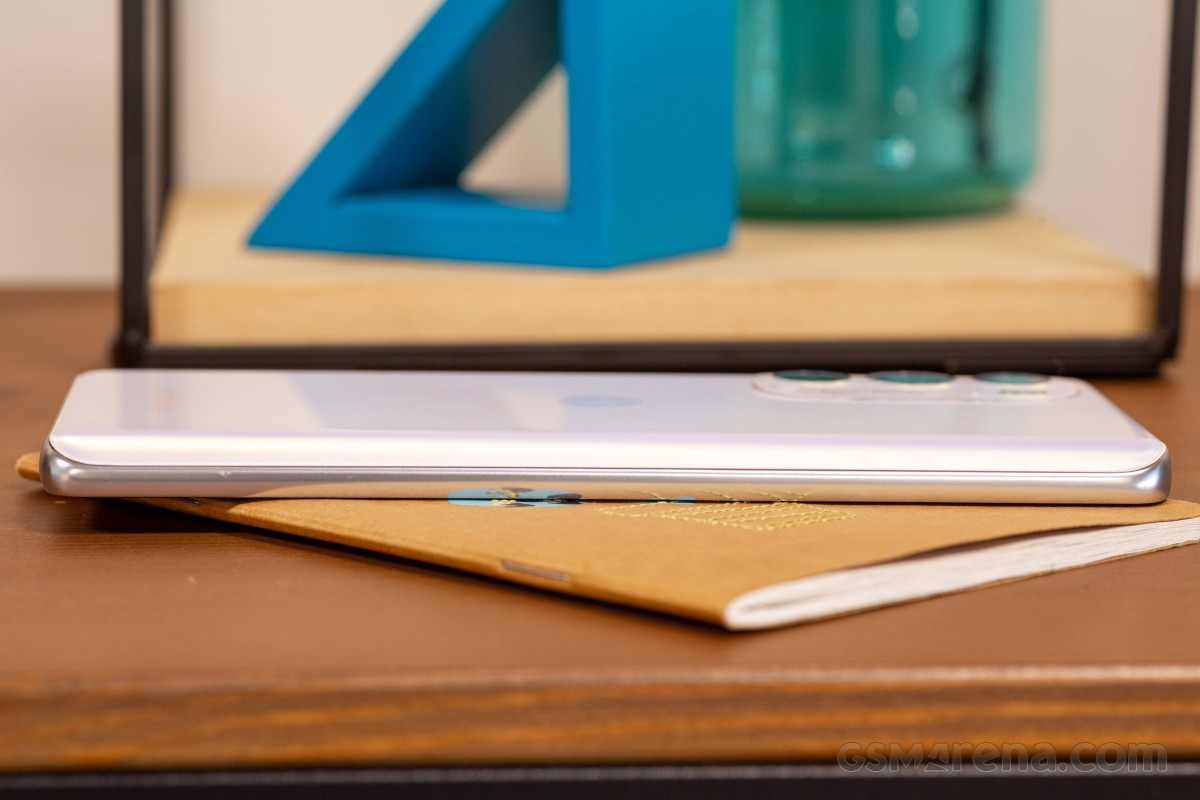 Some proper dust and water resistance would have been appreciated too, but that's missing on the Edge 30 Pro. The gasket on the card tray suggests there's some level of protection against the elements, and there is indeed - Motorola says the Edge 30 Pro should survive 'accidental spills, splashes or light rain' and the phone carries an IP52 rating. It's specifically not been designed to be submerged in water and is not waterproof. Most competitors are, though. 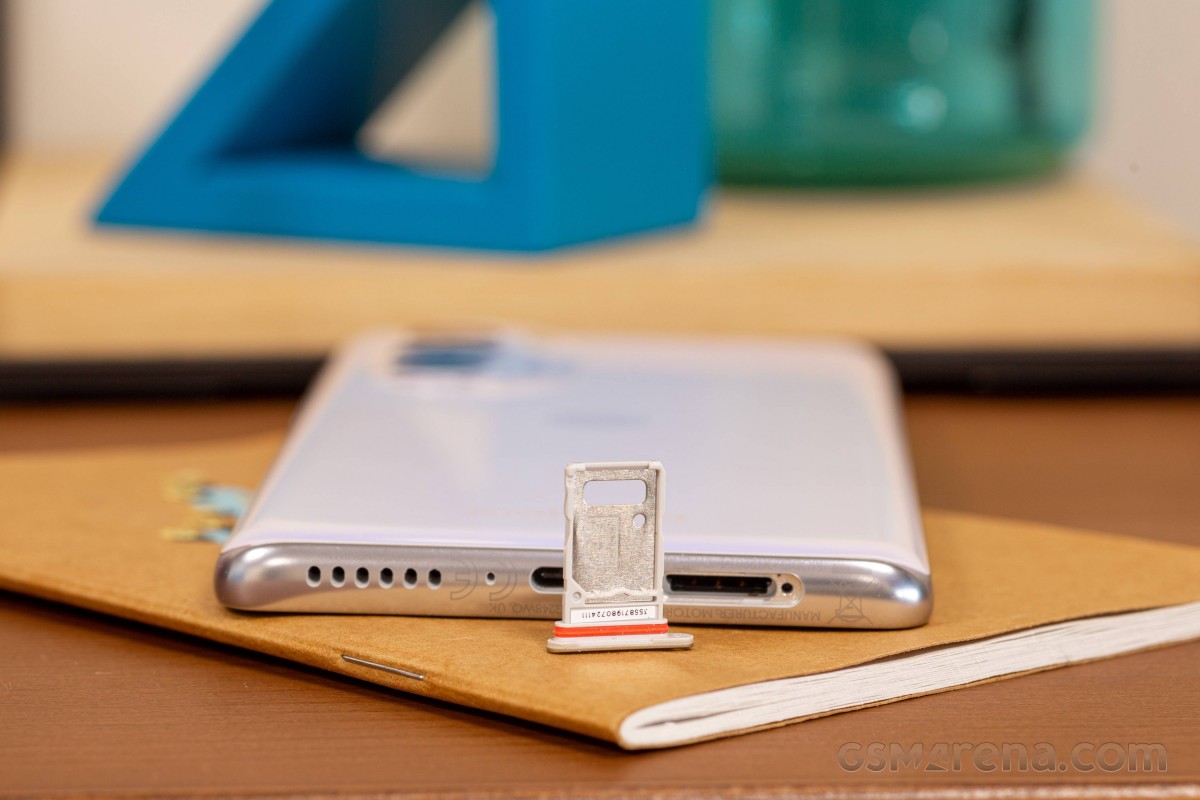 Since we're here anyway, let's mention what else you can find in this vicinity. That would be the USB-C port, the 'primary' loudspeaker and the mic. It's the perfect spot for the model name, trash can and CE markings so that they don't spoil the looks of the phone's back. We find it particularly amusing how the C is placed around the mic pinhole. 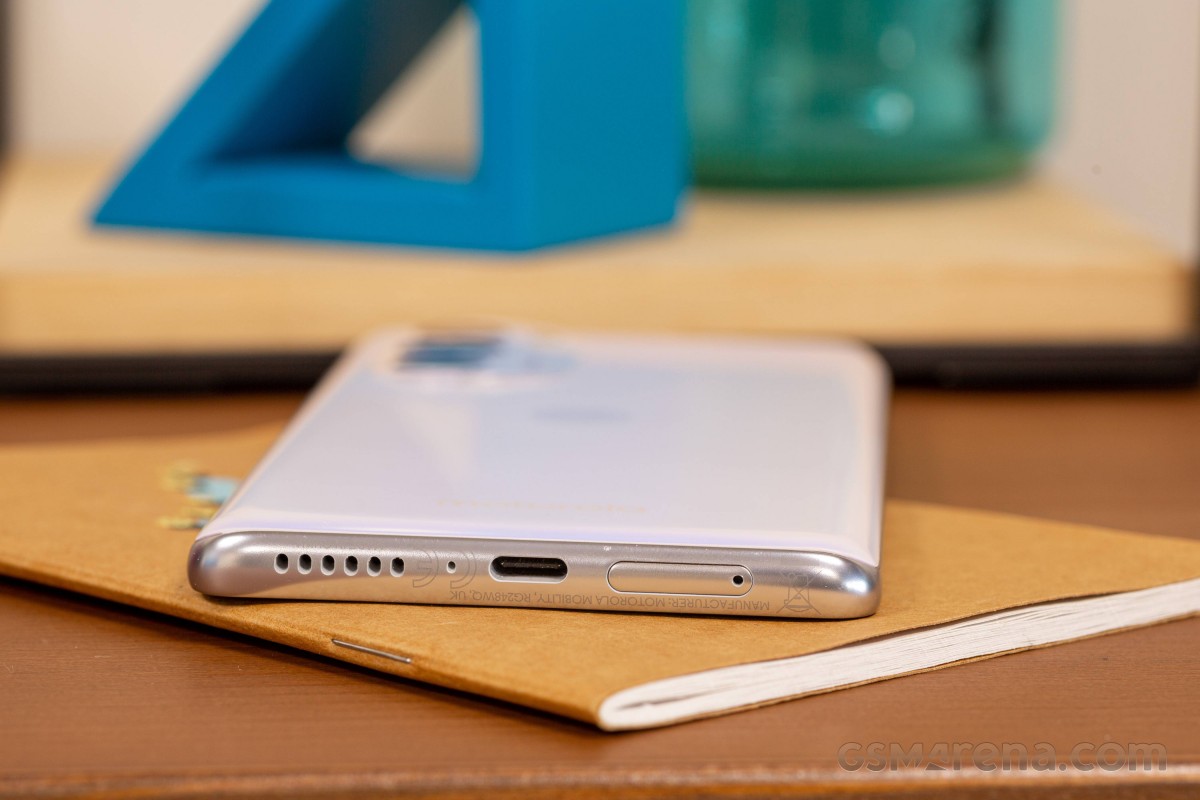 On the opposite end of the phone there's nothing but a mic pinhole, and the left side is even more devoid of features - there's literally nothing there.

On the right side you'll find the power button/fingerprint sensor combo and the volume rocker. Right off the bat, we'll say these are positioned way too high. The volume rocker is near the very top of the handset and is out of reach in any 'natural grip' scenario. 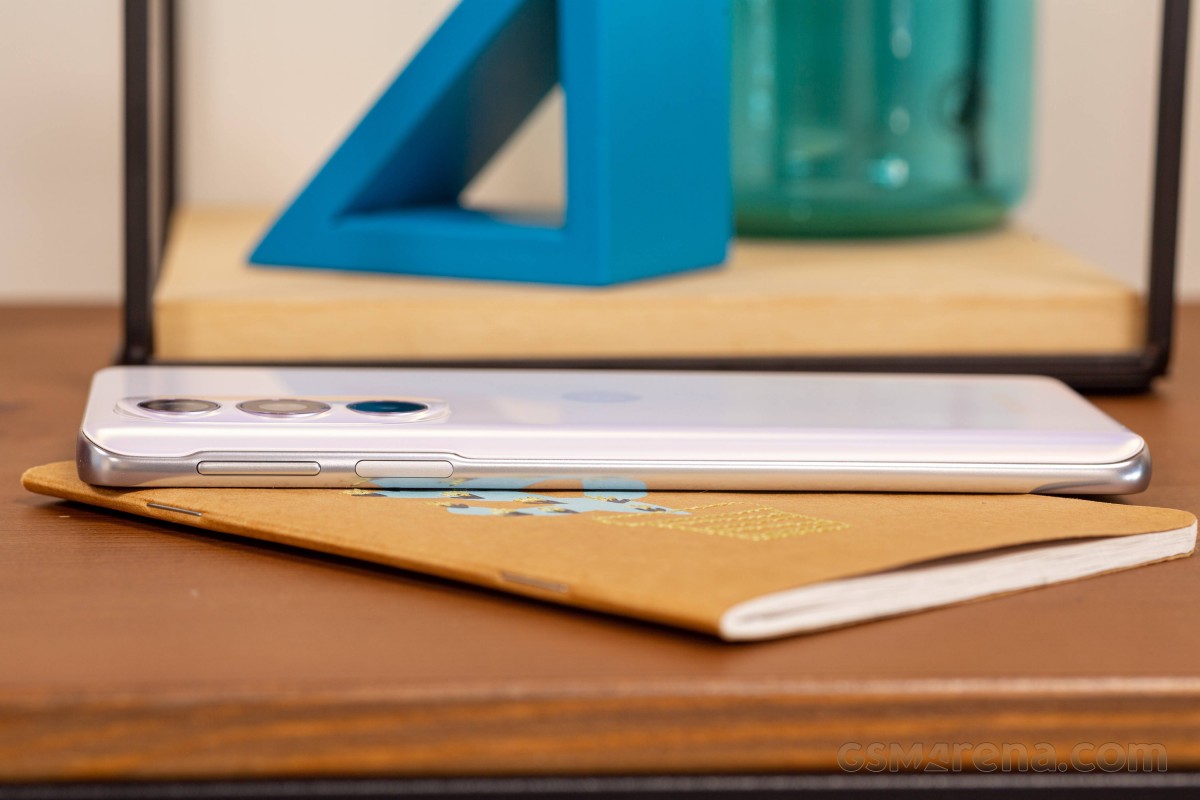 But even if we're to assume you rarely play around with the volume and you can expend another limb for the task or adjust grip momentarily, operating the fingerprint reader is a vastly more frequent event. That requires stretching even for right thumb access (with average-sized digits, at least) and reaching it with the left index finger is even less graceful.

The capacitive sensor itself, once you reach it, works as expected and unlocks quickly and reliably. A silver lining of sorts is that because the sensor is in an unnatural spot, you're less likely to engage it by accident. If you do happen to run into accidental touch issues, you can enable the option to require a press to activate the fingerprint unlock - not all phones let you do that. The 6.7-inch OLED display of the Edge 30 Pro is entirely flat - gone are the days when Edge meant curved Moto displays. There's a thin black border surrounding the panel and it's slightly thinner on the sides than it is top and bottom. If you're one to be irked by that minor discrepancy, perhaps you'll at least appreciate that the black strips above and below the display are the same thickness. 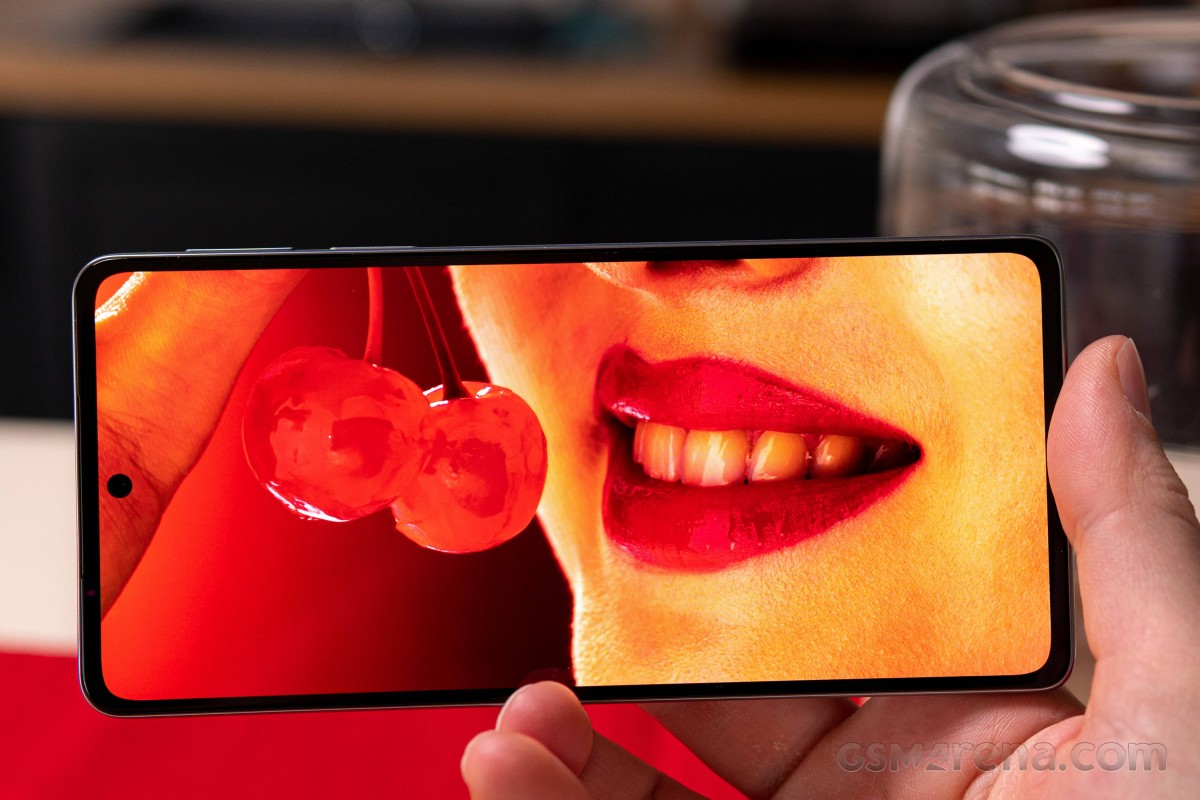 The cutout for the selfie camera is reasonably small - it's not the tiniest we've seen, but it's also not often you get 1/2.8" 60MP selfie cameras. With that in mind its diameter isn't something to complain about.

Barely visible, the thin slit where the display glass borders on the frame is the outlet for the second speaker which is also an earpiece. The Edge 30 Pro measures 163.1x76x8.8mm and weighs 196g. Thickness is somewhat above average, but the curved edges of the back mitigate that to a great extent. Neither the footprint nor the weight are anything out of the ordinary for a full-sized high-end phone, and most of those are in the 6.7-inch screen diagonal ballpark, so dimensions are unlikely to be a deciding factor for or against the Moto.

Then again, just because that's the norm for the class, doesn't automatically make the Edge 30 Pro the right fit for everyone. Other more compact full-featured options can be had for as much or less money if you're after pocketability. 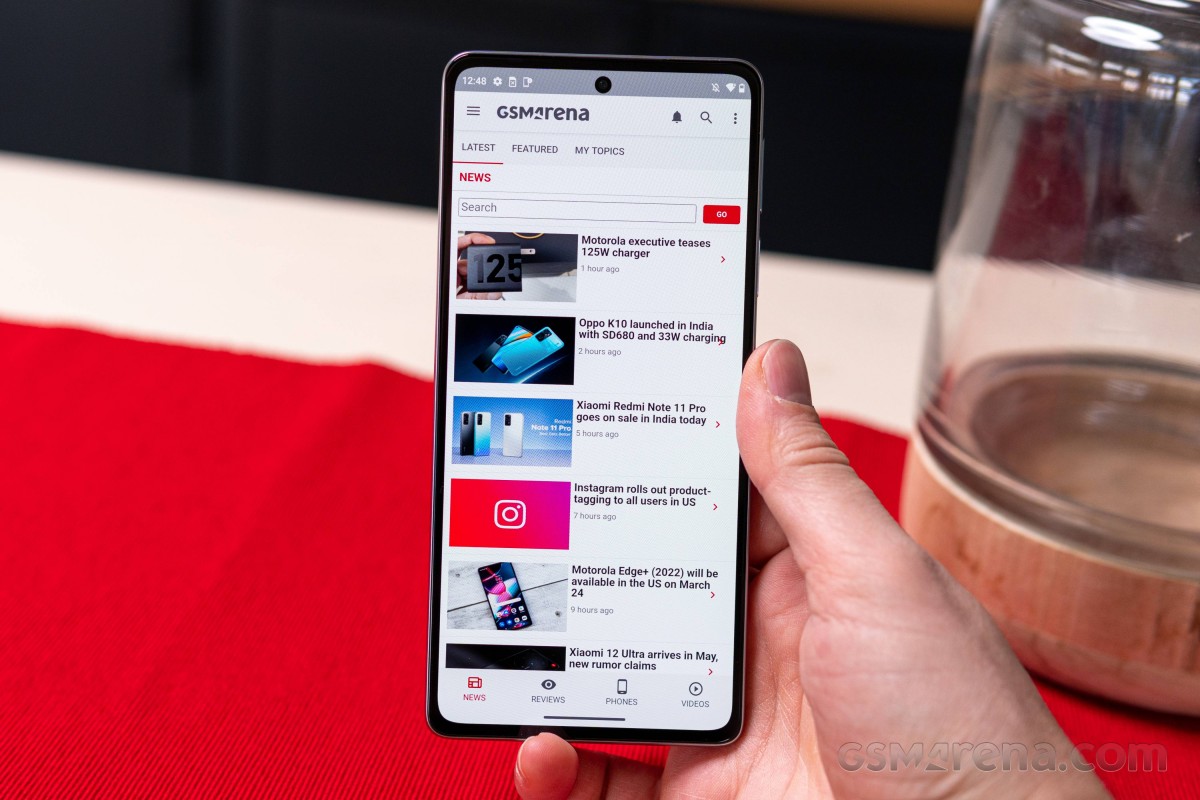 RandyRiffin or whatever the hell your name is quit hating and keep your opinion to yourself bro. Go look at the benchmarks for these phones on your list. This Motorola outperforms all but one of the Android devices you mentioned, and that being said ...

There are plenty of phones with those speccs. Xiaomi 12X and Realme GT2 Pro (kind of qualify because of telephoto macro), Oneplus 10 Pro, Vivo X70 Pro+, Oppo Find X5 Pro, There are even older options surprisingly that cater your needs: Find X2 Pro, O...