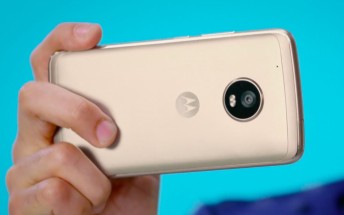 We already know that the Motorola Moto G5 Plus will land in India on March 15 (which is exactly one week away), and now, it has been revealed that the phone will be a Flipkart exclusive at launch.

.@Moto_IND A big warm welcome to #MotoG5PlusonFlipkart! The most awaited G is all set to be available exclusively on Flipkart on the 15th. pic.twitter.com/T4abYoD7Oq

There is no word on the Moto G5 Plus' India pricing, as well as which memory configurations will be made available in country. For the uninitiated, the phone starts at $229 for the 2 GB + 32 GB variant and goes up to $295 for the 3GB + 32 GB model.

Moto G5 Plus to be available in India on March 15

Moto G5 and G5 Plus now listed for pre-order in Germany, ship in 4 weeks

Is moto g5 plus with 4gb variant also launching on 15th march ?? n what about price ??

I can surely compare Motorola with Mi. 1)It is American, but owned by Chinese. 2)it used display panels, processors etc from same suppliers just like all other companies ex Qualcomm, sharp, corning and Sony sensors. 3)phones of both companie...

Motorola is of lenovo but its american; also it makes it phones in India. You cant compare mi with moto phones. Stop reading the specs, there is something called quality, go for that.