The Motorola Moto X40, likely to be known as the Edge 40 Pro in western markets, still awaits its release. We've had numerous reports and leaks and we know for a fact that it's running the recently announced Snapdragon 8 Gen 2 chipset from Qualcomm. Now Lenovo's General Manager of the mobile business arm shared its AnTuTu score. 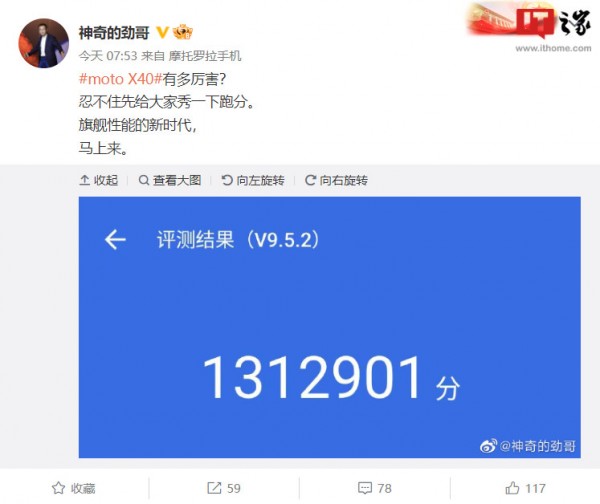 The 1,312,901 result is around 30% higher than what we get on Snapdragon 8 Gen 1-powered smartphones. Even the Plus variant of the SoC barely gets past the 1 million points barrier. In fact, some handsets post less than that. This seems to be in line with Qualcomm's claims of about 35% performance increase over the last generation.

2 me chienese phones = no go, dont have the reliability of samsung or iphone or asus is the 3 phones i ever used, ohh i did use motorola but when wasnt lenovo

Yeah right I missed the part where you won. Actually you make others laugh. Please continue this so that I can laugh and be happy always😂😂😂

Neither was the moon. But keep on trying. You started, so accept your defeat. Or, keep whining about your failure. You have been proven wrong.